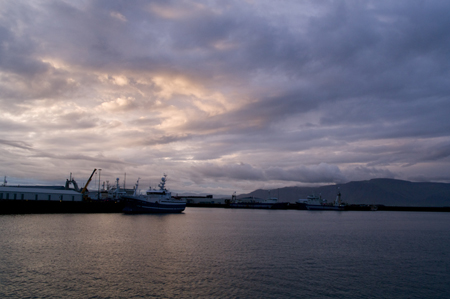 While the UK continues to wrangle over what exactly a new era of austerity really means, the burst offshore bubble that is Iceland has had to adjust more quickly to the concentrated effects of economic crisis in microcosm. The tiny population of 300,000 was riding high on the financial markets before its credit was crunched: unemployment jumped from 1 percent to 7.9 percent in two years; the terms of an emergency IMF loan saw interest rates rise to 18 percent; and new developments across Reykjavik were left devoid of tenants.

In such a context, a Polish arts festival may not have been most Icelanders primary choice for cultural catharsis. Villa Reykjavik, though, which brought together 14 commercial galleries from across Europe in order to create a temporary, international art district, proved itself a worthy testing ground for a new model of cross-border collaboration. With Iceland’s peripheral location making it an unlikely base for selling, the focus here was much more about the art. The fact that the project was largely funded by a grant from the Norwegian government should also have helped to ease concerns of excess in hard times.

Co-ordinated by Warsaw’s Raster Gallery, in collaboration with Reykjavik galleries Kling&Bang and i8, the basic idea of creating an art district in the Icelandic capital was well executed. A number of the participating galleries became the first proprietors to occupy harbour-side developments left empty since the crisis struck. Pertinently, Villa Reykjavik’s opening week of events, from 9–16 July, centered on a former fish-packing warehouse where a salty stench still hung in the air. Among the art works displayed there, most brazen was Michael Sailstorfer’s inflatable Soviet tank, T 72 (sand) (2008). In a country that has no standing army, the tank’s presence ironically proclaimed an invasion from Europe’s former Eastern Bloc.

Also intriguing was ‘Tropical Iceland’, presented by Istanbul’s Rodeo gallery. Meandering across former office spaces above the fish-packing warehouse, the group exhibition took as its starting point that – when viewed from the opposite end of Europe, beside the waters of the Bosphorus – Iceland has the lure of a ‘tropical’ other world. In the cold, empty offices, a feeling that you shouldn’t really be there added to the collection of disconcerting, illusive works. Rodeo’s intention was that the exhibition should make visitors reflect on the disconnect between reality and tourists’ expectations of foreign climes. It was a premise that worked up to a point. The best work here, though, Emre Huner’s 21-minute film, Juggernaut (2009), deals with unrealizable dreams of the future: presented from a 20th-century perspective, a huddle of middle-aged men sit in a darkened room, scrutinizing designs for a Utopian, planned society. But lurking overhead is the threat of war and an awareness that, in 2010, we are already living in a future world, albeit one that lacks the Utopian sheen.

If this all sounds a little downbeat, a more joyful release was provided by Johanna Billing’s enchanting video, I’m Lost Without Your Rhythm (2009). Screened by London’s Hollybush Gardens, the work was made for the 2008 Periferic Biennale in Iasi, Romania. Set to Billing’s own cover of ‘My Heart’ by Wildbirds and Peacedrums, the video captures the movements of dance students as they enact snippets from a performance. Weaving various fragments together to form a beguiling, mesmerizing whole, Billing has added an extra layer of choreography in the post-production editing process, cleverly capturing an essential meeting of music and dance.

An unintended symmetry, which upheld the Villa Reykjavik premise of creating neighbouring galleries, could be found between Billing’s work and i8’s solo exhibition of the Berlin-based, Icelandic artist Elin Hansdóttir. An innovative creator of installation work, Hansdóttir has taken American choreographer Loie Fuller’s Serpentine dance, and its filming by the Lumière brothers in 1896, developing on the idea of a dancer whose whirling movements are consumed by a billowing dress, to the point where it is the dress, and not the dancer, that becomes the dance. Transforming i8’s permanent gallery space with false walls and mirrors, Hansdottir used photography and film to beautifully reinterpret Fuller’s groundbreaking work.

More than anything else, the Villa Reykjavik project came to be defined by an uplifting interaction between music and visual art. Across the opening weekend, an international cast of musicians – from all-girl teenage Icelandic band Pascal Pinon to surreal, Polish-Argentinean fusion act Paristetris – performed late into the night, whilst the standout piece in a diverse film programme was Wilhelm’s Sasnal’s excellent feature, Swiniopas (Swineherd, 2008), with its own forceful soundtrack. Rounding of events, a live performance piece by William Hunt, saw the English artist playing his guitar from a stepladder in the Atlantic Ocean. A catchy emblem for a diverse collection of art works brought together on a remote, economically chastened island.