Several years ago I collaborated on a special project for frieze magazine with the late artist and illustrator Christopher Darling. Working together we produced the first chapter of a graphic novel that I had wanted to produce for some time. Chris’s involvement was crucial. Tragically, just a few days ago, I received news of his death. What follows is a short reflection on the process of our collaboration and the invaluable contribution Chris made to my own practice.

13 February 2013: then frieze associate editor Sam Thorne emails me with a proposition. ‘We are currently embarking on a special issue themed around fictions, and how artists are using different narrative structures today.’ Sam knew of my 2010 book Dark Matter in which I describe what I call mock-institutions, art projects that mimic actual schools, bureaus, agencies, or even corporations (think of the Center For Tactical Magic or The Yes Men). I decided to propose something unforseen. ‘What would interest me most’ I wrote to Sam, ‘is submitting a one or two-page graphic novel illustrating your theme and focusing as you propose around issues of collectivity and para-fiction, or mock-institutionalism as I call it.’ 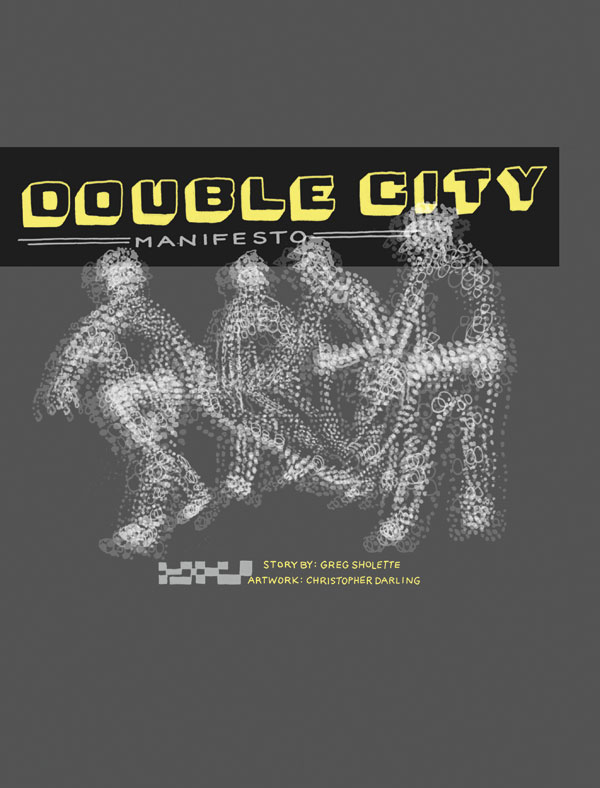 Sam was game. But while I already had a basic plot concept in mind, the challenge was coming up with the appropriate visualization to realize the story, and on a tight deadline. I am an avid sketcher. Still, the graphic novel genre is characterized by certain visual protocols and design elements. In order for this piece to be affective I would need to adopt these conventions with some credibility. I began to search for someone more experienced with this visual form to help create the necessary effect.

I work with a number of excellent graphic artist colleagues at Queens College CUNY (The City University of New York) including Matt Thurber whose eccentric comic book style was my first consideration. However, the very idiosyncratic approach that gives Thurber’s work its twisted energy might easily overwhelm my story, which was already pretty quirky on its own terms. That is when I came across the drawings of Christopher Darling whose direct yet understated technique seemed a perfect match for the story of Double City.

Double City is essentially a parable about an artist who lives and works in an alternate or perhaps near-future New York City. He is not happy. Trapped between having to be ‘creative’ within the ever-expanding affective economy that uses predatory digital networks to invade his innermost world in search of extractable cultural capital, he longs to find a way to rebel against the system. That involves a steep learning curb. 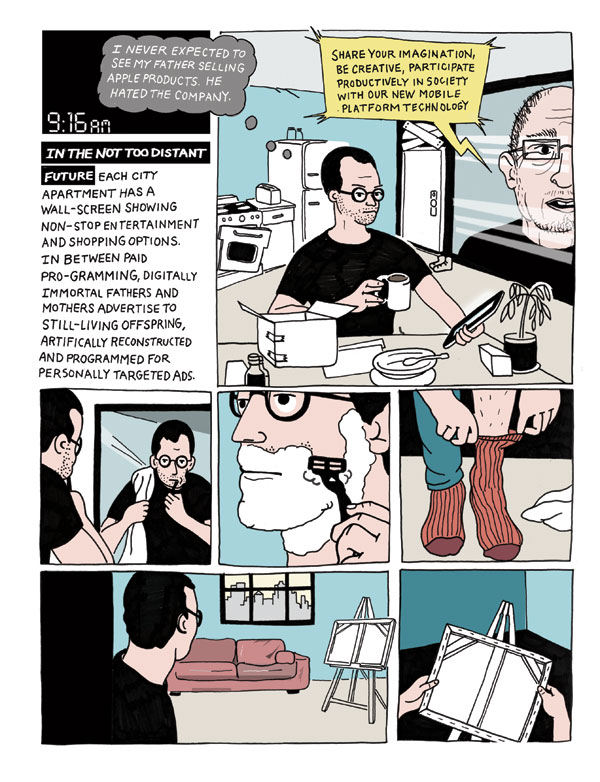 Dear Christopher, we are colleagues at Queens College (I am the guy who bugs you every year about updates for the department's website) and I have an odd question … Would you have time to collaborate on a graphic novel with me?

Dear Greg, it'd be my pleasure & I like Frieze. 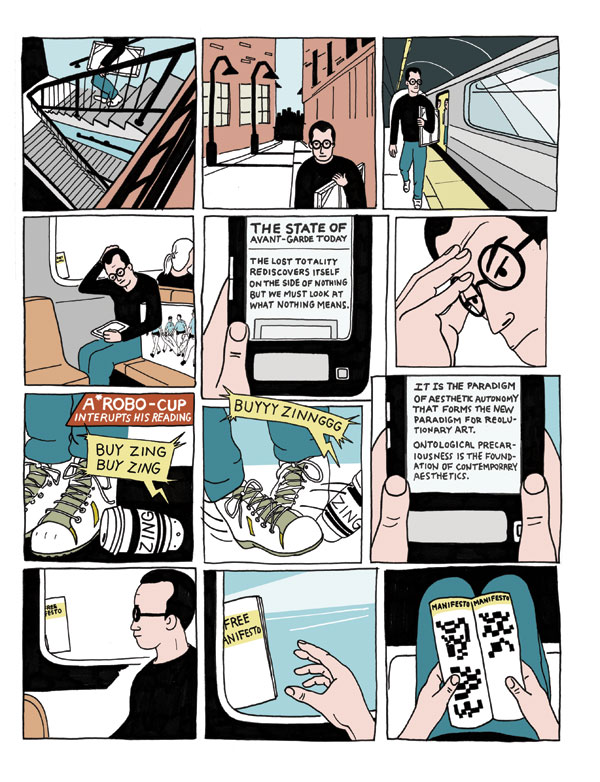 Hi Christopher, so here is a really rough storyboard and story outline for Frieze Mag. Tell me what you think based on your experience? 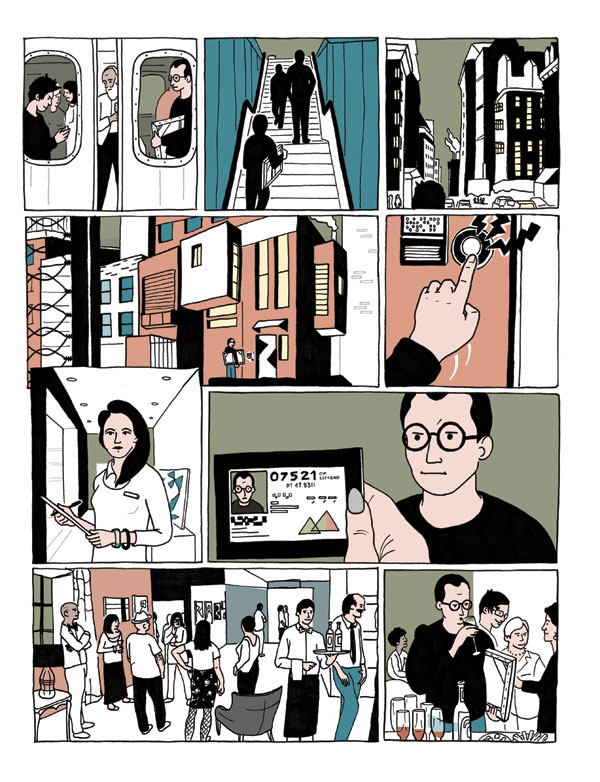 Hi Greg, So I read over the story – really interesting. [I have] a few technical questions: How many pages do we have to work with (thinking it'll be tough to get everything on two)? Also how much of the story do you see written out? I think a bit of it will have to be as the story is a little abstract/futuristic in parts. 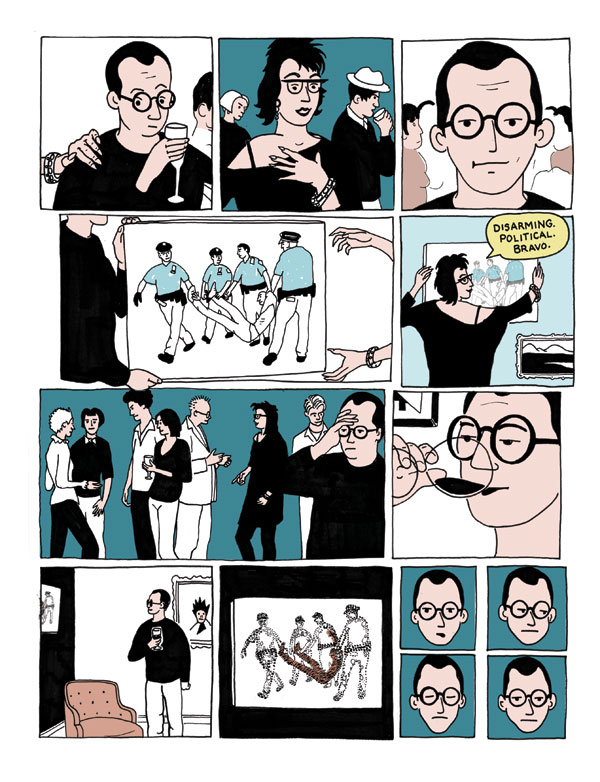 Christopher liked the story, which frankly made me feel good because he was the first to read it and this was a new direction for my work. After a few weeks his diligence and combination of technical knowhow and artistic refinement brought my dystopian universe into being with so much elegance that when Sam saw the results he wrote back to us: ‘after talking with our art director, Sonya, we were wondering if you might be interested in thinking about producing something for the cover of the issue itself?’ Christopher’s frieze cover picked up on the character we created for Double Story, a slightly bewildered young artist who spends most of his life on the subway. And it fit perfectly with the issue’s theme regarding fictional investigations by visual artists.

Chris later moved to Ohio from New York. Still, we discussed further collaborations. Other projects always managed to get in the way. Meanwhile, Chris continued to make an impact on underserved communities in his new home state, including working with 15 prisoners on the Hough Mural, a project that grew out of classes he taught at a correctional facility in Cleveland. 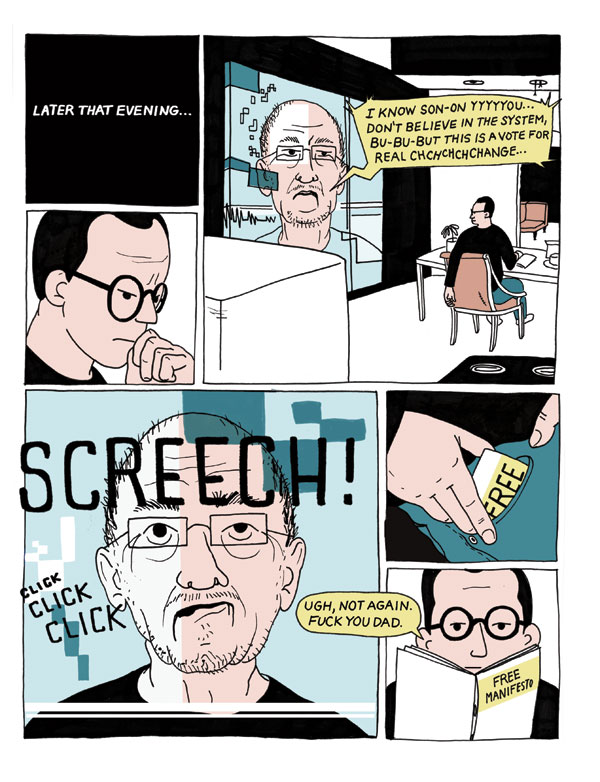 By the end of Double City chapter one entitled ‘Manifesto’ we find our demoralized artist protagonist riding home on the train. It's a long trip. He notices a tiny printed brochure tucked into the corner of the plastic seat. He tugs it out and finds a manifesto that starts off addressing the marginalized cultural workers who inhabit the dark matter of the art world.

‘Distinguished by our mutual redundancy we are the art world’s means of reproduction, an ever-present, unexceptional, yet largely invisible legion of art handlers, packers, fabricators, gallery attendants, photocopiers, schedulers, coffee fetchers, pre-failed students and precarious adjuncts [who are now] teaching ourselves to be militant, learning to interrupt the smooth culture and with it all that appears natural and inevitable … we suspect if you are reading this then so are you.’ 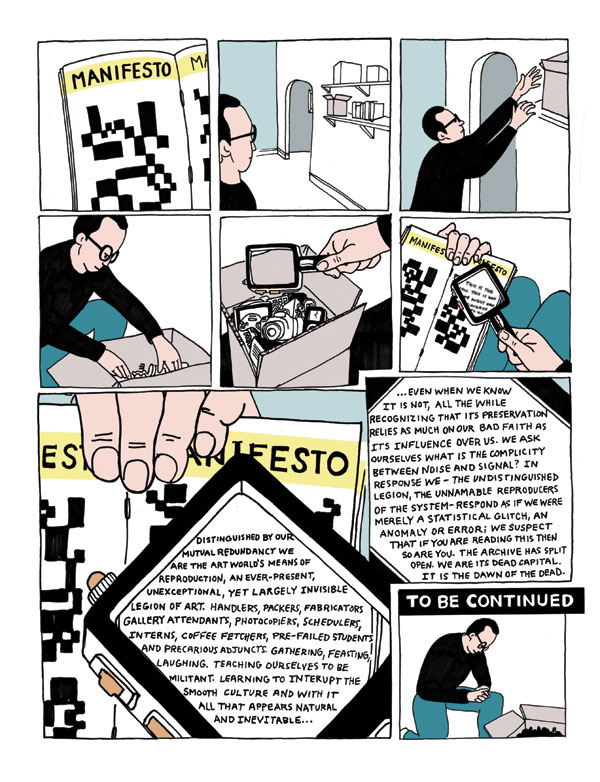 Christopher Darling was one of many artists who work in the far-flung trenches of the contemporary cultural universe. In the admiring words of artist and colleague Ryan Hartley Smith: ‘how Chris translated complex feelings, experiences and narratives into such simple line work and colour – and always with a sense of whimsy and gentle humor – without losing the power and dignity of his subjects, is something I will be forever be fascinated and inspired by.’ I can’t express my appreciation for him any better. Christopher Darling will be missed.

Gregory Sholette is an artist, activist and author based in New York. A member of Gulf Labor Coalition and co-founder of two artists’s collectives: Political Art Documentation and Distribution (1980–88) and REPOhistory (1989–2000), he is the author of Delirium and Resistance (Pluto, 2017), Dark Matter: Art and Politics in the Age of Enterprise Culture (Pluto, 2010) and co-editor of Art as Social Action (Allworth Press, 2018) and The Interventionists: Users’ Manual for the Creative Disruption of Everyday Life (2004).