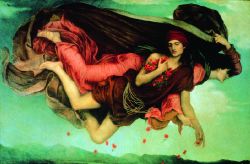 The artistic circles of the last quarter of the 19th century seem to have been dominated by winsome young and not-so-young things, loungers and dilettantes who would dispense the odd bon mot from the nearest chaise longue while luxuriating in the brocaded pleasure of aesthetic life. 'The Wilde Years' suggested that the flamboyance and perceived superficiality of this section of late Victorian society was one of the main catalysts in bringing about a change in perception towards individuality and freedom in an age where one's 'style' was as much a political statement as an aesthetic choice.

The influence of Oscar Wilde, perhaps the central figure in the backwater artworld of fin-de-siècle London, is inestimable. This exhibition traced his life - from the height of his career to his demise in Paris - through his effect on painting, sculpture, decorative arts and ephemera. As he appeared to know everyone it was important to know, 'The Wilde Years' was, in part, an album of that epoch's brittle beau monde.

The images of the personalities associated with Wilde fluently evoke the style and attitude of the period: Jaques Emile-Blanche's Sir Coleridge Kennard Sitting on the Sofa, or 'The Portrait of Dorian Gray' (1904) depicts a young aristocrat, the son of a Mrs Carew, one of Wilde's greatest supporters, who instigated the commission for the Wilde memorial by Jacob Epstein. Sir Coleridge's self-conscious elegance is heightened by Blanche's exaggerated style: his impossibly long fingers and slightly bulbous facial features are reminiscent of the more unfortunate Bourbon monarchs. Blanche seems to have been drawn to young men of a certain physical disposition, as his portrait of Aubrey Beardsley from 1895 shows; in both works the painterly refinement of the subject matter is so delicate as to be almost grotesque.

William Bell Scott's Portrait of Algernon Charles Swinburne (1860) comes close to caricature. Swinburne, the leading poet of the Aesthetic Movement was, we learn, weakened by excessive drinking and had to be supervised for the rest of his life by a close friend. Here Swinburne looks every inch the delicate, crazed aesthete. With a tiny body and rodent-like face, he stares out of the picture from beneath a mop of wild red hair that appears to have been tossed by sea breezes.

One work stood out as the least given over to stylish exaggeration: William Powell Frith's genre piece The Private View at The Royal Academy, 1881 (1881-82)is a group portrait of the rich, the famous and influential all gathered in one of the academy's galleries. Compared with many of the other paintings in the exhibition, everyone here looks rather ordinary. Wilde himself stands just right of centre, a white lily in his lapel, his hand poised over the exhibition catalogue. Frith sought to record for posterity the looks and the fashions of the day, and the result is a panoramic Who's Who of contemporary society. It includes portraits of Ellen Terry, Sir Henry Irving, Millais, Trollope, Browning, Gladstone, Lillie Langtry and Lord Leighton. In My Autobiography and Reminiscences (1888) Frith recorded that he 'wished to hit the folly of listening to self-elected critics in matters of taste, whether in dress or art'.

The exhibition provided a chance to see some astounding, relatively unknown works both directly and indirectly associated with Wilde. William Rothenstein's Parting at Morning (1891) is a stark portrait of a young woman dressed in a simple and slightly dishevelled evening dress, her face lined with exhaustion. At the other end of the emotional scale, one section of the exhibition dealt with Wilde's play Salome and included Gustav Moreau's The Beheading of St John the Baptist (1872-75). Salome, St John and the executioner are all depicted in an immense gloomy hall whose atmosphere is evoked with no more than a series of deft brush strokes.

Wilde's position as the doyen of the late 19th-century cultural élite meant that he and his 'type' were the objects of ridicule in magazines and advertising even after his death. Max Beerbohm's exquisite cartoons reacted to Wilde's influence in pieces such as The Name of Dante Gabriel Rossetti is Heard for the First Time in the Western States of America (1916), which depicts Oscar's portly figure in silk stockings and bowed pumps, holding a lily and declaiming to a group of sullen citizens during his lecture tour of the United States in 1883. The exhibition also includes a series of advertisements that employed his image to sell anything from wallpapers and stoves to 'Warner Bros. Crystalline Corsets'. The subject of Punch cartoons and West End plays, Wilde's swift downfall culminated in the popular press with the vivid illustrations of The Illustrated Police News during 1895, which traced his arrest, trial and imprisonment with grubby tabloid delight.

Inevitably, this exhibition said as much about the spirit of the age as it did about Wilde himself; however, the airless bunker of the Barbican Art Gallery and the show's division into thematic sections made for a glumly academic atmosphere. But it did clearly illustrate that Wilde was, in a very contemporary sense, one of the first media personalities. His persona was partly his own creation and partly the projection of others, and, through his style, flamboyance and notoriety he gained a kind of transgressive power. This, of course, is something intangible and so, inevitably, I found myself spending more time reading the many wall texts than looking at the work. Wilde lived relatively fast and died relatively young (46), setting a precedent for the idea of the tragic celebrity, the ghastly charm of which lives on. For all its contemporary relevance, this fraught but still languid world of not that long ago seems immeasurably different form our own. That, more than anything, was the exhibition's attraction.