The most embarrassing moment in Peter Carey’s memoir Wrong About Japan (2005) has to be when he naively queries a master sword maker about the ethics of conferring sublime artistry in the crafting of an instrument of death. Carey mangles it in great fashion, though I’m certain many readers would feel he struck a bold intervention into Japan’s supposed disregard of post-war ethics. I had forgotten about Wrong About Japan until the release of Hayao Miyazaki’s The Wind Rises (2013). 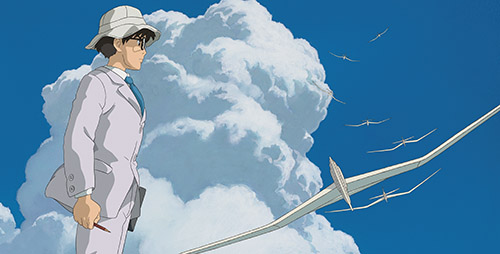 Much has been made of this film being septuagenarian Miyazaki’s swan song, but it’s more like a political phoenix arising from the ashes of 21st-century image-making – the very same epoch which has made such grand claims for how art, contemporaneity and politics are not only inseparable but also a requisite for engaging in critical discussion of their conjoined outcomes. The Wind Rises is superficially a poetic biography of Jiro Horikoshi, the famed aeronautical engineer of the Japanese ‘Zero’ air fighter. The Zero became an icon of the Japanese military during WWII and has remained so since. To those of us outside of Japan, it’s simply the Japanese equivalent of the German Messerschmitt, the American B-52 or the British Spitfire. But to those inside Japan, the Zero embodies the devastating transition the Japanese national psyche underwent as the once-valiant Zero was reassigned by the military to dive-bomb the US battle ships. The Zero effectively became an aerial suicide machine, a flying incendiary tomb, a vessel of self-destruction, guided by ‘divine wind’ (the transliteral meaning of kamikaze). 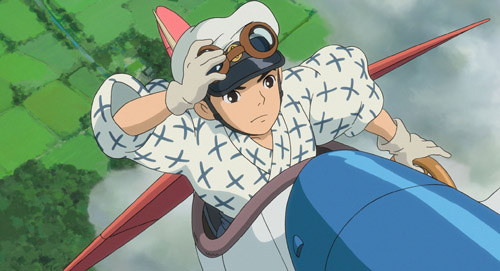 None of this is depicted or even mentioned in The Wind Rises. But that does not mean it isn’t there. Just as the master sword maker deftly fends Carey’s fumbling attempts to ‘truth-trip’ him into realising his role as oriental death master, Miyazaki’s nuanced telling of Jiro’s struggle to design the Zero coalesce into a quiet directive on how one must accept all that is entailed, implied and determined by pursuing visionary beauty with fatal consequences. Throughout the story, Jiro – an engineer, not an artist – unswervingly follows a very non-European line of aesthetic enquiry predicated on a stoic dislocation from all socio-political causality. He is thus a proxy for Miyazaki, who is widely regarded as an iconoclast in the modern history of Japanese animation and its role in voicing traditional precepts of image-making, storytelling and social critique (via the astounding films he has made for Studio Ghibli across nearly three decades).

There’s a gorgeously stifling moment in the film (out of many) which illustrates this. Jiro stands surveying the incinerated remains of an aircraft prototype following its crash during a test-run. The plane is laid out like an aerial-perspective version of those ‘exploded diagrams’ that accompany model airplane kits. I immediately thought of two things. The first was the Japanese illustrator Shigeru Komatsuzaki who painted those kits’ box covers in lurid hyperrealist watercolours. A cult figure for baby-boomer Japan (he was included in Murakami Takashi’s manifesto exhibition ‘Little Boy’ in 1995), Komatsuzaki created a psychic panorama of para-right wartime glory for Japanese baby-boomers who thrilled to the spectacle of war. Japanese cinema rarely, if at all, exploded its wartime exploits on the big screen, yet Komatsuzaki’s intense illustrations are uncannily similar to the nationalist ‘War Record’ paintings commissioned by the Japanese military during wartime (a collection of which only this century started to be publicly re-exhibited in small doses by the Museum of Modern Art, Tokyo). In stark contrast to this populist icon of imagineered military might, Miyazaki’s flattened panorama of actual plane parts deconstructs the thrill of piecing together model planes designed to eroticise the fatal allure of wartime glories – especially those involving the hi-octane death drive of the kamikaze bombers. 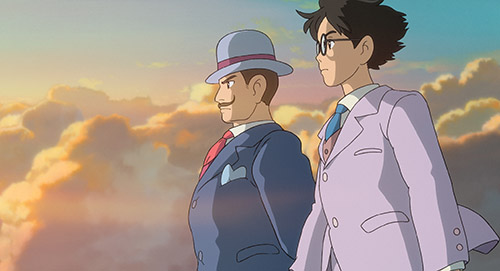 The second image that flashed in my mind is a work lionized by the European art world: ‘Melancholia’, the first of a series of wonky simulacra of WWII German aircraft in lead, produced by Anselm Keifer in the early ’90s. While this is not the place to interrogate the value of post-1980s German contemporary art predicated on stoic ‘re-politicizations’ for the post-war generation’s critique of the ethics of their war-fuelled parent generation, I’m at pains to forward_ The Wind Rises_’ superior complexity in exploring the same. I comparatively perceive ‘Melancholia’ and its post-Beuysian ilk to be metonyms of blunt material corollary. The palpable heaviness of the lead airplane (and much of the installed work and Keifer and Joseph Beuys are notably burdened by their own sculptural weight) mirrors the obviousness of the project’s conceptual bent. How could I not be confronted by the work’s forced rhetoric when standing in front of its passive-aggressive gauntlet, symbolically truth-tripping me like Peter Carey, and placing me on the stand at Nuremberg within the grandiose settings of contemporary art museums?

Unlike dominant tacit assumptions operating within the ethical and political Venn diagrams of contemporary art, The Wind Rises’ ideological voicing is not blared by its leaden construction, but rather muted by the film’s pictorial skein. Miyazaki’s ‘politics of aestheticism’ is articulated through an engineer’s sense of beauty in the Zero’s precision design, assigning the film’s message to be embedded in visuals that betray their very surface. To wit, the film looks, sounds and feels archaic, conservative, olde world: any card-carrying contemporary artist/critic would likely find this animation an execrable melodrama illustrated by particularly conservative modes of pastoralism. Yet, from its absence of standard tropes of politicization in the arts, the film’s significance is illuminated at a meta-poetic level. The Wind Rises shines light on the indelible problematics of segregating politics from aesthetics – which is the prime modus operandi of modern and contemporary art which, impelled to construct something of ‘beauty’, consequently feels it is ‘informed’ and ‘compelled to inform’ us about the world into which those constructs of beauty are directed.

What I’m addressing here is not ideological content, or an artist’s declaration of politics, but the mode of address by which an art literate audience accepts discursive reflections on art’s political impulses. Declaration is the province of T-shirts worn by radicals and titled monuments for politicians: their materiality becomes a vehicular form of construction, deliberately constrained by art-literate channels shaped and maintained by consensual linguistic procedure. Miyazaki’s ‘mode of address’ – like so much of post-war Japanese culture, art-literate or not – does not flow through these channels. The Wind Rises not once stands at a vantage to even imagine how politics and aesthetics could be anything but molecularly fused.

Philip Brophy is a writer based in Melbourne, Australia.