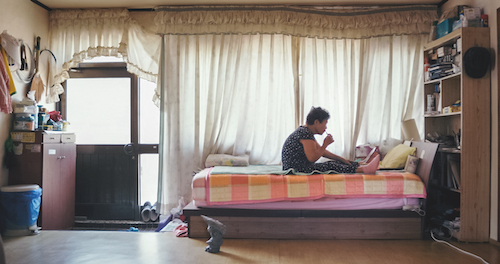 The Yangji-ri village, Cheorwon was originally located inside a strictly military controlled area, Civilian Control Zone, until 2012 when the Civilian Control Line moved to further north. A quiet town in the countryside (Yangji-ri) is covered by an almost invisible military presence, only inhabited by a handful of elderly men and women, and very few children. A foreign artist arrives with his team and, during a whole month, they build several sculptures, placing them all around the town: silent witnesses of the invasion. Portraits of many inhabitants, their rites, their habits. Adopting the shape of a fictional self, a man walks around the town, along the rivers, sacred temples and rice fields, engaging the inhabitants and modifying everything he steps on. The man is gradually and physically transformed, blurring the limit between science fiction and the observation of a presence. Film produced by Rei Cine SRL and Co-produced by the Real DMZ Project Committee Korea under the direction of Adrián Villar Rojas.