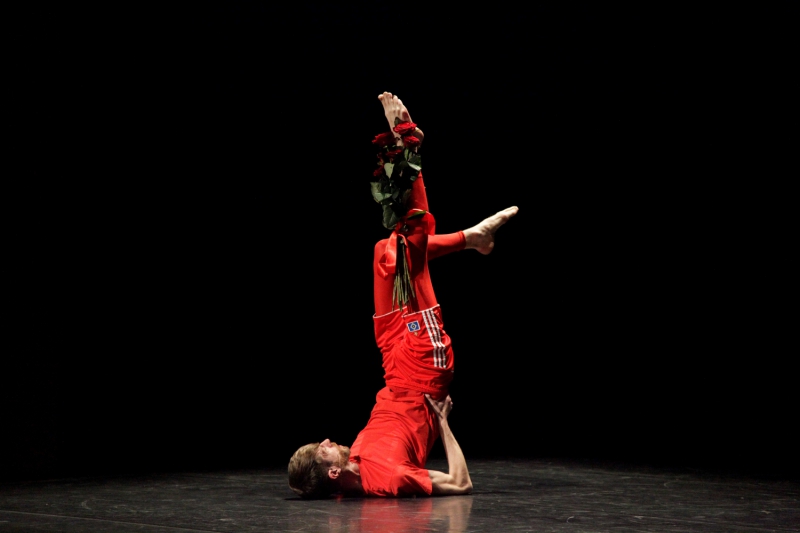 How to posthumously exhibit the work of a performance artist? Specifically, the work of Ian White (1971–2013), an artist concerned with the transmission of ideas, and with what constitutes liveness. Curators Kirsty Bell [a frieze contributing editor] and Mike Sperlinger pose a response to this question in ‘Any frame is a thrown voice’, an exhibition, or perhaps contemporary interpretation, of White’s diffuse and intellectually rigorous practice.

White’s absence is, of course, felt (his body was a slight but nonetheless physical presence in his work), however Bell and Sperlinger propose various strategies for reanimating these past performances. In his earliest work on show, The Neon Gainsborough (2002–3/2018), a slide show of Thomas Gainsborough paintings is projected onto a wall. An accompanying film slowly unveils handwritten subtitles, radically interpreting these works. In White’s own words, the paintings are ‘read as psychotic by a gay hysteric.’ At the climax of the original piece, White walked from behind the slide projector and unfurled two A1 photocopies of the Transvestite Transsexual News. In this retelling, a cued spotlight illuminates the posters. Elsewhere in the exhibition, archival photographs, technical scripts and written narratives describe the work. There’s an accompanying programme of performances (Adrian Rifkin and Julie Cunningham present performances of White’s pieces Black Flags and Democracy on 6 June from 7pm), film screenings and even an art theory course. Unusually for White’s practice, video is used sparingly in the show.

As part of 6 things we couldn’t do, but can do now (2004/18) White and longtime collaborator, Jimmy Robert, painstakingly learnt and performed Yvonne Rainer’s avant-gardeand ground-breaking dance, Trio A (1966). White understood that one way to grasp a gesture is to learn it yourself. As curators, Bell and Sperlinger abide by this dictum, re-presenting White’s practice in a manner faithful to its internal logic.