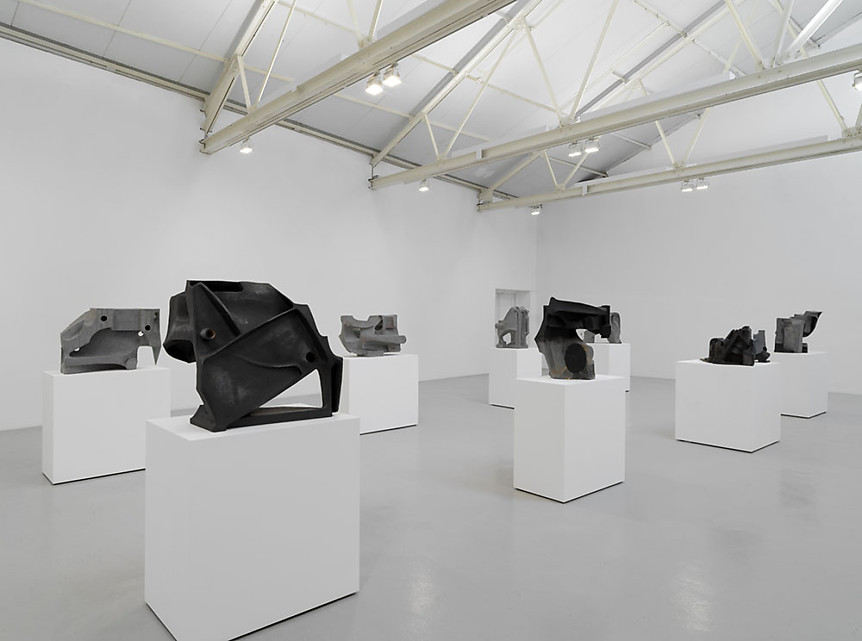 Vincent Fecteau constructs objects for a future that never happened. In his fifth exhibition at greengrassi, the American artist places nine sculptures (all around 60 x 60 x 60 cm), each on a white plinth, in one quiet room. Some forms are industrial, resembling engines or anvils. Others are more geological, like wave-carved rocks. All are painted grey or black and most are finely speckled with a watercolour pencil, to give a finish like tarnished steel. On some, lime green or brown specks have been flicked over the surface, evocative of lichen or rust. There’s a joke hidden in Fecteau’s sculptures; the industrial appearance of the objects is a crafted illusion. The captions reveal the objects’ homespun origins: papier mâché.

These new works (all 2018, all Untitled) have a more violent tone than his previous – often brightly coloured, sculptures of similar formal shapes – citing a genus via Italian futurism. As in previous exhibitions, Fecteau’s sculptures also include florist paraphernalia: birch twigs, curly willow, cane webbing, raffia. In one piece, a dried lotus pod is stuffed into a cylindrical shape that resembles an exhaust pipe. In Fecteau’s future who wins: nature or the machines?