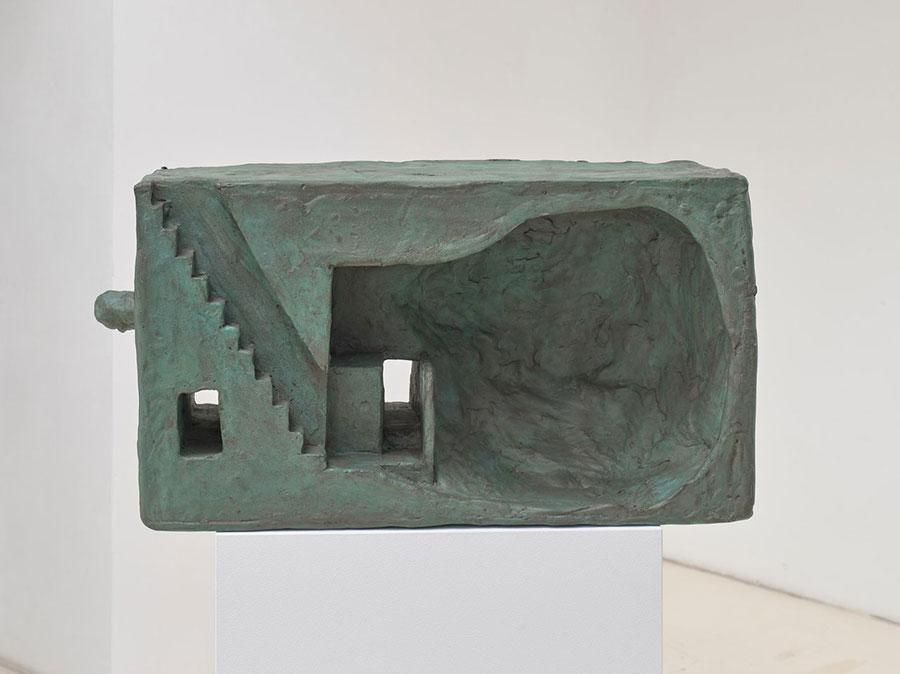 At the very front of Portuguese artists and collaborators João Maria Gusmão and Pedro Paiva’s two-in-one exhibition, ‘WHERE THE SORCERER DOESN’T DARE TO STICK HIS NOSE’ and ‘Another B&W Ghost Show’ is, perhaps, the most familiar of all the objects presented: Plato’s cave model (2018), a sculptural miniature of the philosopher’s mystical allegory. It’s a good set up for what follows, as we become miniature shadow puppets in Gusmão and Paiva’s immersive and cave-like installation. Within this fabricated dome, several new short 16mm films play on opposing walls, each depicting domestic and biological objects at a de-accelerated framerate: a rope that coils up and then back down, a slow, precise haircut, a green shutter that flaps in front of the lens. Stepping outside the installation, you walk around its scaffolding – and it begins to resemble more of a zoetrope than a cave. Large scale photographs (‘Ghost Show’) depict a different sort of shadow play: a hammer shape-shifts into something soft, a large camera shutter becomes a window. Gusmão and Paiva disrupt both the nature of time and the mechanical natures of image production in this striking exhibition.