A
BY Alice Bucknell in Exhibition Reviews , UK Reviews | 12 AUG 21

Zadie Xa’s multimedia installation at Leeds Art Gallery, Moon Poetics 4 Courageous Earth Creatures and Dangerous Day Dreamers (2021), opens with an instruction: ‘Go to where the sun sets in the western sky and you’ll find the life-giving water.’ The voice-over gives way to the sound of lapping waves and a spacecraft landing, while a spotlight roams the darkened room, changing colour to reveal the costumes of a band of critters: Seagull, Cabbage, Fox, Orca and Conch. A gnarled seashell glows radioactive purple as the narrator shifts voice. Conch hisses about an ‘infectious, malevolent rot’ lurking for ‘a hundred years, or maybe hundreds more’, while a revving chainsaw bleeds into the low screech of an oil rig and the rumble of jet engines. As the lights drop, Conch reassures us – ‘there are a million paths into the future, and many can be full of hope’ – before beckoning us to close our eyes and follow the sound.

Devised with artist Benito Mayor Vallejo, with whom Xa has closely collaborated since 2016, Moon Poetics is an invitation to journey in the shoes of Princess Bari, the Korean myth of the first mudang or shaman, who, despite having been abandoned by her parents at birth, goes west in search of an elixir to cure them. Lasting just under an hour, the polyvocal work applies this myth to writer and activist adrienne maree brown’s transformative vision for breaking negative human cycles, explored in Emergent Strategy: Shaping Change, Changing Worlds (2017), and Bruce Lee’s conception of water as a source of healing – from the martial artist’s only English-speaking interview on ‘The Pierre Berton Show’ (1971) – to flesh out an entangled, modern-day folktale.

In the entrance hall is a supersized painting of a map populated by Xa’s avatars, recalling both East Asian folding screens and medieval cartography of unknown lands riddled with monsters. This leads into a darkened main room where the three-dimensional soundscape and sculptural installation weave together in an audio-visual ecological allegory. Beginning above a smog-ridden cityscape verbalized by an omniscient Seagull, listeners traverse a moonlit field with a coy Cabbage, who unearths questions of settler colonialism and land rights, before diving underwater with a matrilineal time-traveling Orca.

Told by a single voice, the monologues invoke the presence of a shapeshifter – a prevalent persona in Korean shamanism. An installation of sculpted shoes, masks and hand-painted costumes is illuminated by a fluttering light, evoking the dramatic context of Talchum – a masked Korean folk dance that now embodies Xa’s creatures. Orca, a great wave of an animal, towers over the viewer, while Seagull is suspended from the ceiling, its feathery cloak washed in hazy aqua light. The narrative focus of Moon Poetics constantly toggles between macro and micro, apocalyptic and euphoric. Underscored by an ASMR-inducing buzz, it glazes ecological processes with intimately disclosed geological facts, sometimes supple and organic – like the photosynthetic tenderness of a cabbage patch germinating under moonlight – sometimes brutal and machine-led, like extracting petroleum from the ocean floor.

Yet, Moon Poetics is not a despairing work. The darker undertones of Xa’s shimmering environment and exuberant costumes – just like any good folktale – reflect the breakages of an interconnected world, as much as its capacity for repair. Rather than centring the human in an ecological disaster narrative we alone produced, Moon Poetics aligns itself with multispecies theorist Donna Haraway’s rejection of the Anthropocene – explored in her e-flux essay ‘Tentacular Thinking: Anthropocene, Capitalocene, Chthulucene’ (2016) – as a human-centric term that ‘saps our capacity for imagining and caring for other worlds’. Xa’s non-linear narrative underscores the urgency of cross-species interdependency for reimagining and reconnecting with the natural world and reforming the human systems that have damaged it. By framing folklore through an array of relatable references, Moon Poetics encourages accountability in the shared compost heap of this heating planet that is, as Haraway writes, ‘neither sacred nor secular; thoroughly terrain, muddled and mortal – and at stake now.’

Alice Bucknell is an artist and writer based in London, UK. Her work has been shown at KÖNIG GALERIE at Ars Electronica, Linz, Austria, the B3 Biennial, and Annka Kultys Gallery in London, and will be presented at RIXC in Riga in collaboration with the Goethe-Institut’s AI Residency in September 2021. She is currently a staff writer at Elephant and Harvard Design Magazine, and has contributed to publications including Architectural Review, Flash Art and Kaleidoscope. 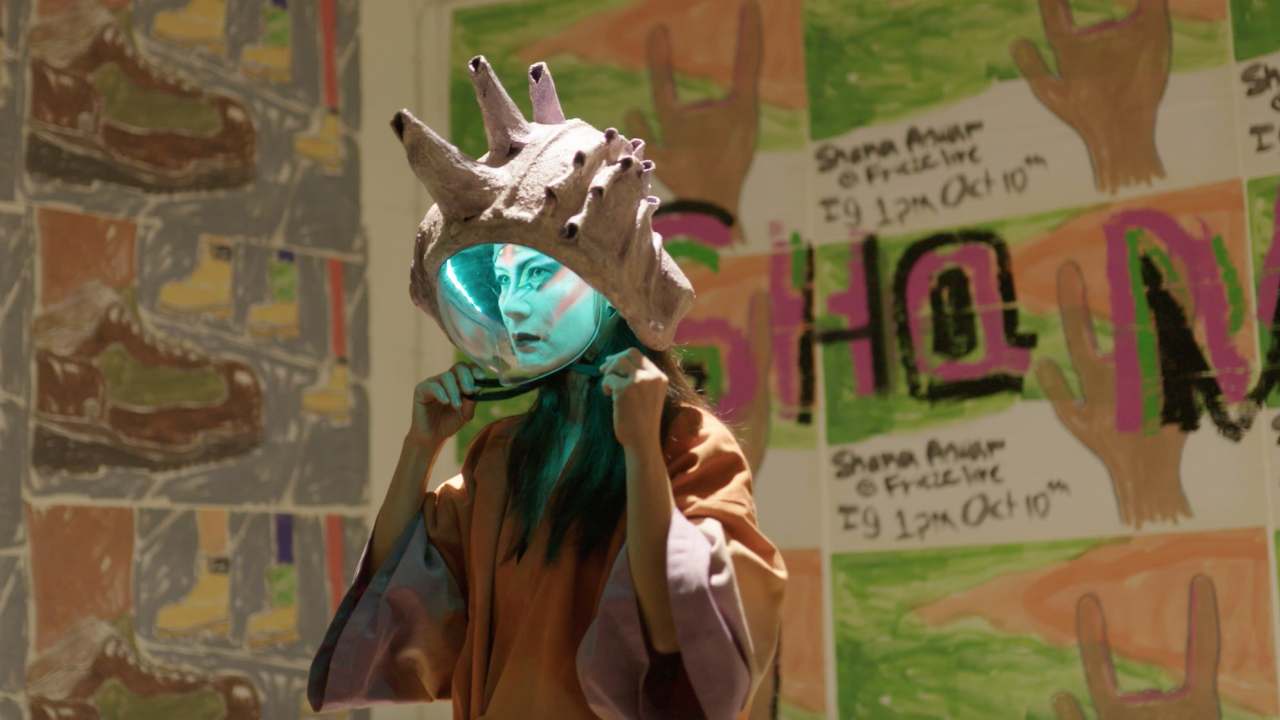 A new performance for the 2020 LIVE Programme, curated by Victor Wang 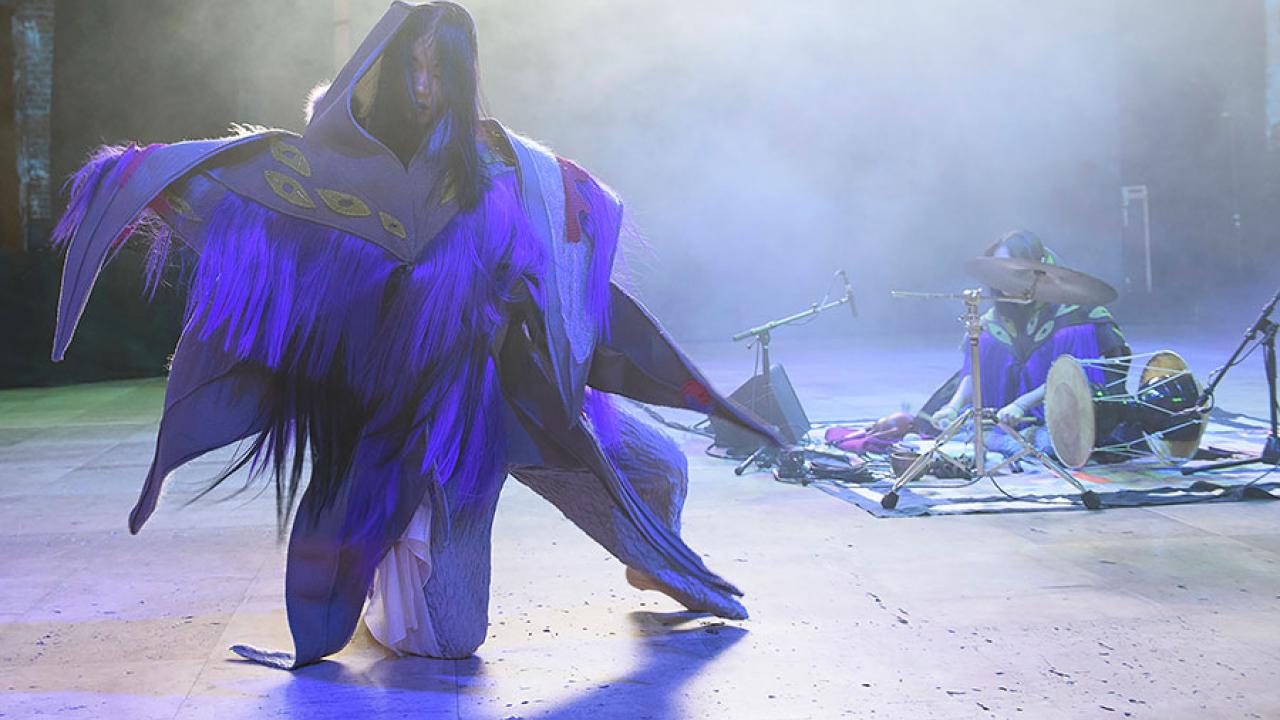