The fifth Athens Biennale, ‘Omonoia’(concord), is a platform for experimentation that will be take place over the next two years

A series of exhibitions, workshops, and urban interventions in collaboration with grassroots activists and art spaces, it will culminate in 2017 as the sixth edition, to coincide with the opening of documenta 14. To direct the focus on theory and social activism, Athens Biennale co-founders Poka-Yio and Xenia Kalpaktsoglou appointed the anthropologist Massimiliano Mollona as the programme director.

‘Omonoia’ kicked off at the National Theatre New Rex with the summit ‘Synapse 1: A Laboratory for Production Post-2011’ during an intense period of anti-austerity demonstrations and strikes. The sessions – ‘Alternative Economies’, ‘Rethinking Institutions’, and ‘The Performative in the Political’ – featured panels of political thinkers, social theorists, activists, and curators presenting projects and propositions for improving human welfare. To set the tone, moderator Andrea Fumagalli displayed a text on the screen: ‘Slavery exists, and it is called internship.’ Mechanisms for change included alternative economies, sharing networks, and cooperatives focused on the ideal of universal access to culture and a living income as a basic right. 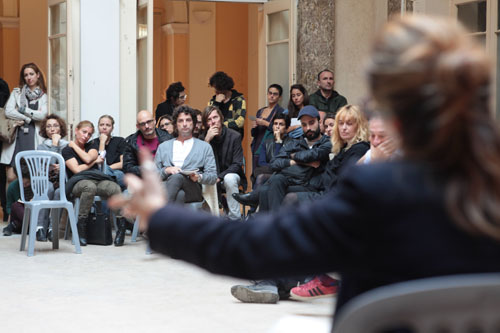 Discussions progressed the next morning in workshops hosted at the biennale’s basecamp, the former Bageion Hotel on Omonoia Square; it was the first of a ten-day programme mounted by groups set up in various rooms of the building. In the entrance, Oliver Ressler and Dario Azzellini’s three-channel video installation Occupy, Resist, Produce (2014-15) – focusing on collectively managed factories in Italy and Greece – served as an unofficial manifesto for the forum. That afternoon, participants gathered in the ballroom to plan a way forward, triggering lively and impassioned debate. Upstairs, the Contemporary Greek Art Institute (ISET) displayed an archive of artworks installed or proposed for the Omonoia district, along with Georgia Sagri’s video The New Kind (2003), documenting the artist struggling to move across the pavement with her hands and feet bound. As a key figure in Occupy Wall Street, Sagri is emblematic of the discord inherent to such collective endeavours, which often fall apart. 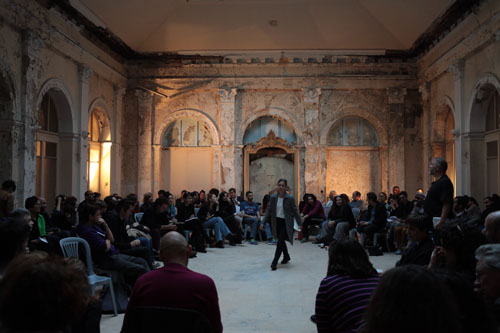 At the summit, Thodoris Karyotis, a member of the Vio.Me factory occupation in Thessaloniki, explained that cooperatives are often absorbed into and ultimately mimic the system that exploits labour. Later, Professor Leo Panitch called not merely for rethinking but for the complete dismantling of established institutions as the only way to effect change: ‘You can’t change the world without taking power, in spite of what Occupy thinks. You can protest as much as you want but you have to take away control.’ Similarly, Mollona suggested the need for a complete rethinking of the market toward a post-capitalist model. But are we, as Panitch suggested, just preaching to the choir?

As Professor Angela Dimitrakaki pointed out, ‘Occupation keeps people occupied but they need to make a living.’ Sylvia de Fanti, an actress involved in the three-year occupation of Rome’s Teatro Valle, said the goal was to deem culture not a privilege but a right, and one not based on volunteer work. Which brings us to the biggest elephant in the room: the Athens biennale is managed largely by volunteers, including the directors. Although this is common in underfunded cultural production, an organization that claims to address these issues needs to be the change it wants to be, first and foremost. Yet without the dedication and persistence of these people, the biennale would not exist, and these questions would not be raised. Where else is the opportunity for performing the political in the realm of art? 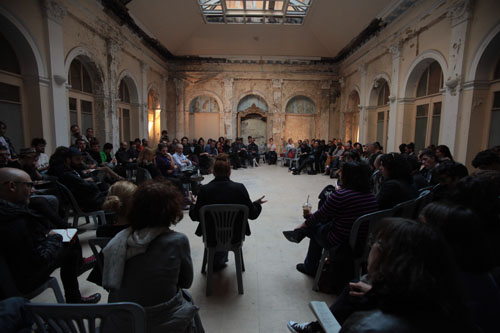 Conceived as a ‘device’ for creative subversion and transformation, the Athens Biennale has occupied vacant structures from its beginning in 2007, with ‘Destroy Athens’, a big international exhibition intended to break Greek contemporary art out of its traditional focus – to deliver a ‘punch in the face’, according to Poka-Yio. Technopolis, a former gasworks-turned-cultural-centre, was borne out of this, eventually enlivening the area as a night-club zone. The second biennale, ‘Heaven’, employed disused former Olympic facilities; and the third, ‘Monodrome’, took over an old school building for an exhibition lamenting the lost glories of Greece. In 2013, the fourth Athens Biennale, ‘Agora’, occupied the former Stock Exchange for two months of presentations and performances, as well as a small exhibition, in search of creative solutions to the condition of bankruptcy. The current location, to be used as an open laboratory engaging the neighbourhood, exemplifies the devolution of the city: the neoclassical Bageion Hotel, a gathering place for young writers in the early 1920s, was seen as the birthplace of new Greek literature. At the nexus of six main thoroughfares and the train and Metro lines, the once-elegant Omonoia Square, lately synonymous with the influx of immigrants into Greece and seen as unsafe, has always been an urban hub. An ambitious collective experiment using crisis as a catalyst, ‘Omonoia’ is the logical conclusion to the biennale’s trajectory.

Greek society has a long tradition of social activism, and Athens – the place that conceived democracy and is now at the forefront of the global economic and spiritual crisis – is an ideal place to contemplate new models. An installation across the front of the hotel reads ‘UNDER CONSTRUCTION.’ Indeed, as a reflection of Pablo Picasso’s wisdom that ‘every act of creation is first an act of destruction’, we may well be ‘learning from Athens’ by the time documenta opens. It is all part of the process – and there may even be some good art exhibitions. Stay tuned.

Cathryn Drake is a freelance writer, editor and curator.