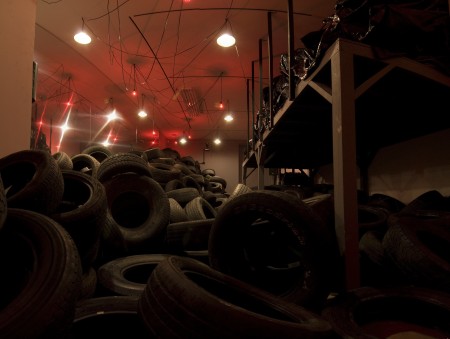 ‘Rearrange the tyres’ intoned William Pope L, who, along with Sharon Hayes and Josiah McElheny, was one of three artists invited by curator Helen Molesworth to reinterpret Allan Kaprow’s 1961 work Yard for Hauser & Wirth’s inaugural New York show. Kaprow was insistent upon reinvention and not – as Molesworth points out in her accompanying statement – ‘re-creation, or restaging, or remaking’. With that in mind, the voice asking visitors to rearrange the filthy mounds of car tyres that crowded the gallery’s new Upper East Side HQ could almost have been that of Kaprow’s ghost. ‘According to the first principles of Environmental Art’, wrote Kaprow in 1998, Yard ‘must always change.’

And change it did, although, in one sense, this notably politicized version had temporarily come home to roost; it was on these very same premises that Yard first appeared, when the building housed the Martha Jackson Gallery. In 1961, that gallery staged ‘Environment – Situations – Spaces’, a show featuring the work of six artists: George Brecht, James Dine, Walter Gaudnek, Kaprow, Claes Oldenburg and Robert Whitman. Originally situated in a small outdoor space at the back of the building, Yard was Kaprow’s contribution, designed to sit on a fuzzy line between being a new form of art with which people could interact, and looking like an everyday junkyard.

Pope L’s reinvention – entitled Yard (To Harrow) (all works 1961/2009) – was staged indoors. The gallery stank of oil and grease, tyres scattered everywhere, shelves and desks covered in black, body-bag-like tarpaulins. Visitors were encouraged to climb across these rubbery outcrops, fumbling in the gloomy space, which was illuminated only by flickering white and red lamps and the odd dim, closed-circuit television screen. Placed next to a grubby wall mirror, a large speaker played the sound of foghorns and train whistles, over the top of which Pope L’s voice delivered a compelling sermon, extrapolating ideas of race, compromised morals, political chicanery and ecological damage from Yard’s material components, and Kaprow’s more playful theories. ‘Rearrange the tyres, rearrange your morals’; the world described by Pope L’s Yard (To Harrow) was indeed harrowing – more suggestive of polluted groundwater and body-bags shipped back from Afghanistan than 1960s happenings.

Hayes’ Yard (Sign) could be found in the New York Marble Cemetery – the oldest public non-sectarian burial ground in New York. With its inhabitants interred in vaults beneath the ground, the cemetery is a long stretch of grass which Hayes filled with dozens of signs, including political campaign placards (‘Free Huey’, ‘Huckabee endorsed by God’); signs advertising lawn mowing or decorating services; sad signs (‘There was a Santa here but some crackhead took it’); angry signs (‘If I catch you dumping you are dead’) and religious signs (‘R U Sure U R Saved’). While Pope L’s take bore a more formal resemblance to Kaprow’s original, Hayes’ looser – though no less rich – interpretation resisted this; her Yard (Sign) was more about a fidelity to the work’s spirit than making a Kaprow cover version, in this case perhaps the idea that a work can exist both within the context of art, and somehow outside of it too; that participation in culture and society necessitates having to deal with conflicting voices and beliefs far messier than those found in the Neverland of many ‘relational’ art works.

At Queens Museum of Art was McElheny’s Yard (Junkyard); a composite digital aerial photograph of the ‘Iron Triangle’, a nearby area of scrap-yards and car repair workshops that is soon to be demolished and redeveloped. The image was projected onto a large wall that encloses The Panorama of the City of New York, a huge, handmade scale model of the city commissioned by Robert Moses for the 1964 World’s Fair. Although a simple visual consonance could be detected between McElheny’s and Kaprow’s Yard – tyres, scrap-heaps, cars – I struggled to connect the spirit of Kaprow’s happening to this portrait of a condemned neighbourhood; it wasn’t so much the loose interpretation that was problematic, but that this flat documentary image required little physical engagement on the part of the viewer; it seemed stand-offish, uninviting. I did, however, happen to notice a set of small signs newly placed around The Panorama, detailing the number of foreclosures in each borough of the city – a sad picture of what happens when others decide to rearrange their morals. 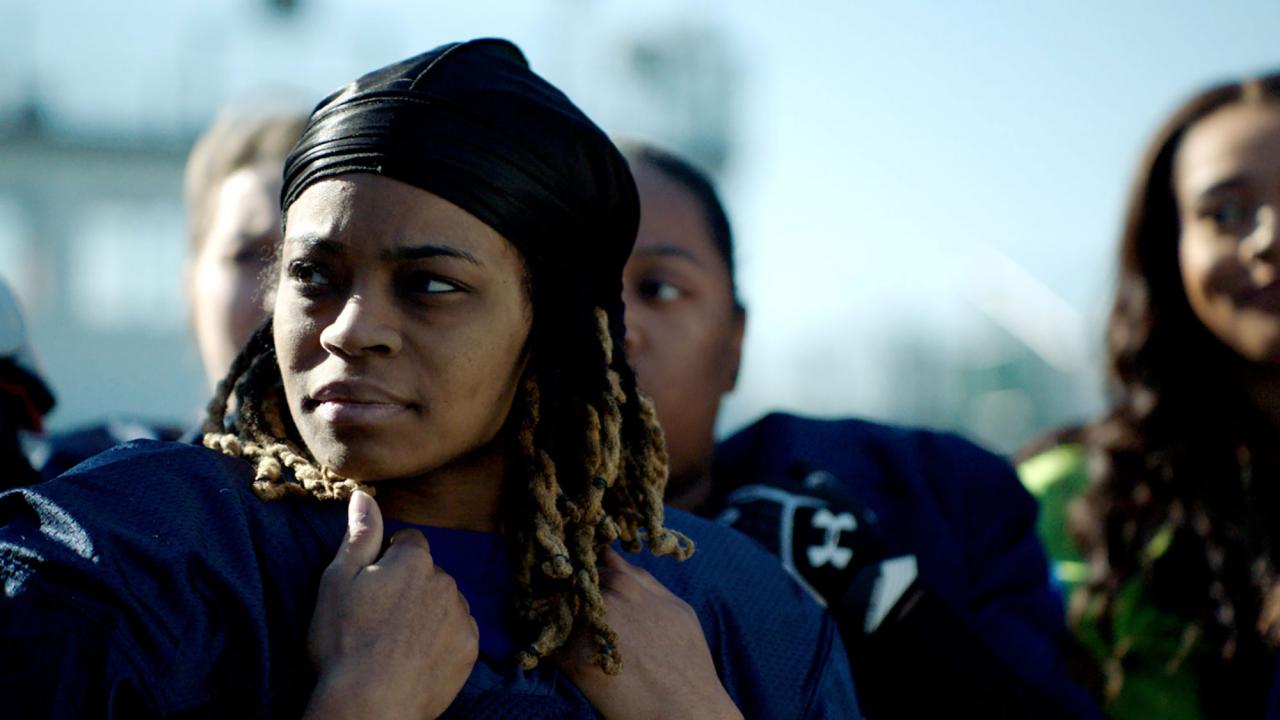 Film , Opinion
Sharon Hayes Turns the Camera on People Who Have Found Their People