The Bees Made Honey in The Lion’s Skull 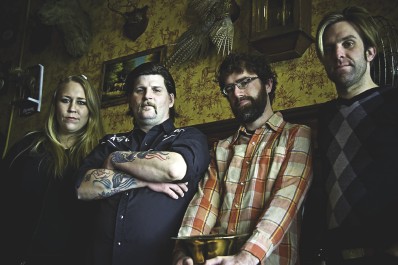 To many, Earth’s Dylan Carlson is synonymous with some of the most outlandish downer-rock records in the past 15 years. To thousands more, he is better known for being Kurt Cobain’s best buddy, immortalised on record by the Nirvana song ‘In Bloom’ (from their 1991 album Nevermind) and on film as the main interview subject of Nick Broomfield’s documentary Kurt & Courtney (1998). Cobain even appears on an early Earth demo entitled ‘Divine & Bright’ (from Sunn Amps & Smashed Guitars, 2001), yet despite their friendship, Earth’s home in Seattle and subsequent deal with grunge powerhouse label Sub Pop, they managed to evade the attention of a media frothing at the mouth for post-Nirvana grunge sounds.

To this day, Earth has more appreciative listeners in marginal genres such as experimental metal and noise than the safer waters of US alternative-rock. This polarization is largely down to Earth’s second album Earth 2. Recorded and released amidst the height of grunge/Nirvana mania in 1992 and ’93, it ranks alongside Lou Reed’s Metal Machine Music and Brian Eno’s Discreet Music (both 1975) in its defiant stance and revision of ambient or drum-free music. Earth 2 features little more than slow Black Sabbath-like guitar riffs (with the exception of one track, ‘Like Gold & Faceted’, which includes subtle percussion) over five long tracks. Carlson’s decision to sport a T-shirt of the famed Florida death metal band Morbid Angel on Earth 2’s back cover was probably as instrumental in getting them noticed by metal fans as the actual content of the album. Thorr’s Hammer, featuring Stephen O’Malley and Greg Anderson, latterly of Sunn O))), were a doom metal band based in Seattle around the same time and initially began as a kind of Earth 2 tribute band. O’Malley and Anderson are Earth’s current label bosses at Southern Lord.

Later Earth albums Phase 3: Thrones & Dominions (1995) and Pentastar: In The Style of Demons (1996) saw a return to the style of their first EP Extra-Capsular Extraction (1991); a kind of slow-grinding, largely instrumental rock that sounds like a 1970s’ Pink Floyd zoned-out on cough syrup instead of weed. However, Earth’s inability to tour and promote these records due to Carlson’s worsening heroin addiction has, perhaps, more to do with these albums being far lesser known or revered than Earth 2, for both albums are in fact sublime. The Bees Made Honey in The Lion’s Skull could be Earth’s greatest album. Since 2005’s ‘don’t-call-it-a-comeback’ record Hex: Or Printing in The Infernal Method, Carlson has been exploring his own take on traditional Americana (country and bluegrass) and its relation to drone-based music. Whereas Hex … felt more like a study in form, The Bees Made Honey … feels like the most fully rounded realization of Carlson’s ideas since Earth’s inception. Although still sparse, the instrumentation sounds richer and the overall mood is more reminiscent of melancholic US post-rock bands such as Aerial M and Labradford than the crawling death-marches of Swans and Melvins, or the empty black voids of Sunn O))). Carlson’s rehabilitation as true sonic visionary seems assured.