What Beverly Buchanan’s ‘Shacks’ Tell Us about the Black South

Later in her artistic life, Beverly Buchanan turned her attention to making a series of diminutive, makeshift sculptures known as ‘shacks’. For this compact but comprehensive exhibition, ‘Beverly Buchanan: Shacks and Legends 1985–2011’, at Andrew Edlin Gallery, New York, curator Aurélie Bernard Wortsman homes in on the artist’s almost-anthropological pursuit of self-built residences and the rural African Americans who lived in them across the southern US.

A number of colour photographs document Buchanan’s travels through Georgia and North and South Carolina in the late 1980s and early ’90s – places she had grown up in and to which she returned in 1977 to make art, after leaving a career as a public-health educator in New Jersey. Beneath these pictures, a small vitrine gathers more photographs, sketches and notes – ephemera that informed the artist’s ‘legends’: handwritten and typed letters affixed to the underside of her sculptures. By way of an introduction, two such legends are enlarged and printed next to the corresponding Harnett County Shack (1988) and Hastings House (1989) at the entrance to the exhibition.

A brief, chronological selection of Buchanan’s shacks, beginning with House (c.1985), sit on wall pedestals, peppered on one side of the gallery. Other shacks are interspersed throughout the space on plinths of various sizes, including Untitled (Tobacco Barn) (c.1987), a tall sculpture based on the North Carolina barns where the artist worked as a teenager. These earlier models were built from cardboard and foamcore and painted in bright colours, perhaps redolent of her former teacher Norman Lewis’s abstractions. Although Buchanan returned to these same materials in 2008, throughout her practice she favoured ramshackle, wood-and-nail constructions – perhaps her most recognizable motif.

While none of the shacks’ architecture is strictly based on existing buildings, Buchanan does allude to their ownership – often through titular attribution, as in Miss Tiny Aiken’s Shack (1987) – making them artistic homages to the individuals that constituted the Black communities she visited. Alongside the sculptures are vivid renderings of the homes in oil pastel on paper. The drawing Blue Sky Shack (1988) contains a short, handwritten text in which Buchanan writes: ‘As a southern artist, I found that I was interested in the work of folk artists and began talking with them and discovered that some of my ideas about returning to a “simple” uncomplicated look in my own work were shared with them.’ Significantly, Buchanan’s self-identification with artists commonly considered peripheral in the art world here reflects her desire to embrace a form of artmaking more representative of the people and community that inspired her work – expressing what she describes in Blue Sky Shack as ‘the spirit of these shack dwellers’.

Further archival material demonstrates how integral these written legends were to the artist’s project, adding a level of personal research to a formal practice that aesthetically treads a line with what is still referred to as outsider art. Buchanan’s witty accounts often describe the homes she’s encountered or retell the tales of their occupants, responding to what the artist refers to – in a notebook entry made available as part of an online component to the show – as ‘groundings’: the emotions these domiciles elicit as sources for storytelling. Yet, Buchanan also sought to pass on the stories of marginalized people as historical narratives, viewed through the lens of, as she put it in another notebook entry, ‘memory versus reality’ – capturing the essence of a people and their surrounding landscape in the feel and look of a single, humble dwelling. 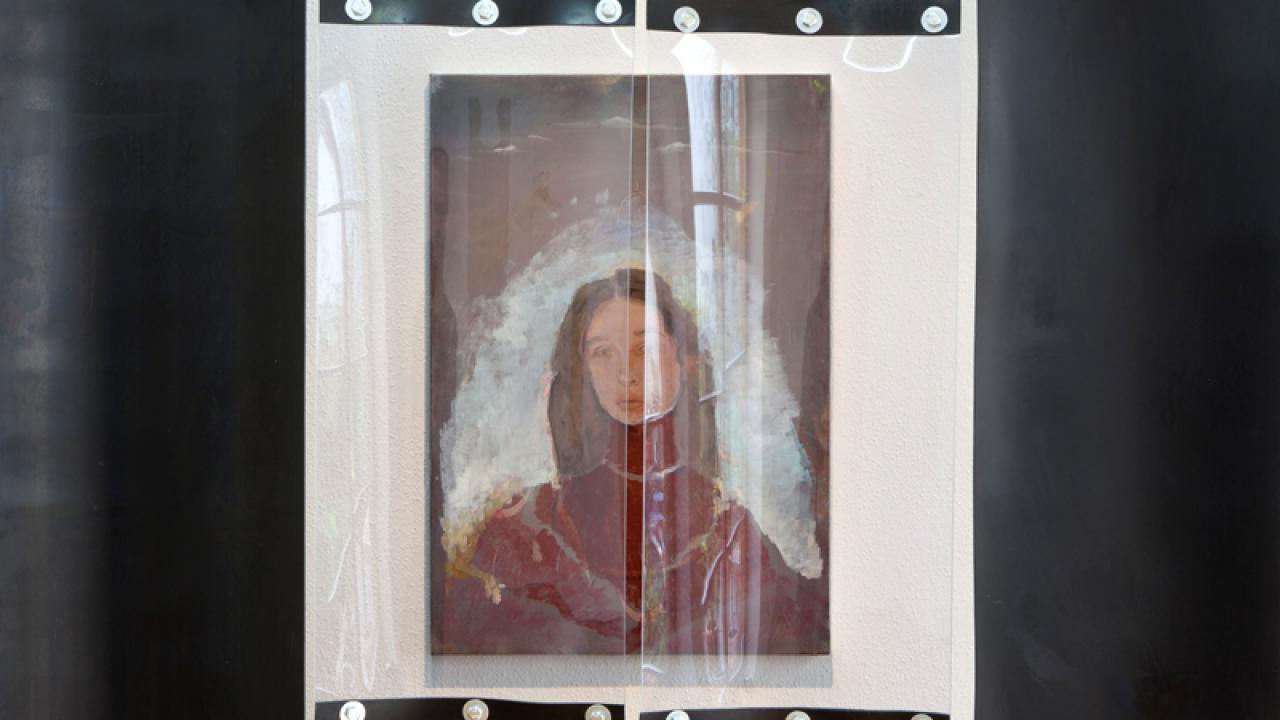