The Book of Dead Philosophers 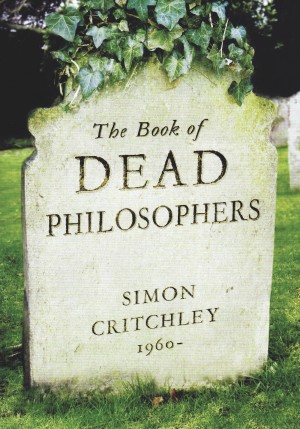 The idea for Simon Critchley’s The Book of Dead Philosophers, a roughly chronological miscellany of 190 deaths, was sparked by a line from Michel de Montaigne: ‘If I were a maker of books, I would make a register, with comments, of various deaths: he who should teach men to die, would teach them to live.’ Critchley characterizes philosophy’s main task as an act of preparation, a position indebted to Cicero’s comment, axiomatic for many ancient thinkers, that: ‘To philosophize is to learn how to die.’ Defending the ideal of the exemplary ‘philosophical death’ of Socrates or Seneca is clearly problematic, given that most philosophers’ deaths are either banal, have been mythologized (Friedrich Nietzsche’s breakdown had more to do with syphilis than his sister and editor liked to suggest) or have little connection with their own writings on death.

Critchley hopes that ‘humanizing details’ will aid approaches to some of the works mentioned, although I am unsure how Immanuel Kant’s aversion to perspiration, for example, would inform a reading of the Critique of Judgement (1790). In his favour, however, Critchley’s resistance to a neatly teleological history of philosophical systems is admirable, as he suggests a messy pluralism that includes sections on Islamic and Judaic thinkers as well as a laudable number of women (among them little-known figures such as Anne Conway).

Although it poses as a serious survey of approaches to big questions, The Book of Dead Philosophers’ scant bibliography and lack of footnotes (‘It is said …’ is Critchley’s default construction) suggest a self-help book that is closer to Alain de Botton than Alain Badiou. Even more disheartening is the citation of Wikipedia as a major source. Entries range from some three pages (Baruch Spinoza gets just shy of four) down to a quite superfluous single line (all we learn of Paul Ricoeur is that he ‘died peacefully and without incident in his sleep at the age of ninety-two’). Richard Rorty, who died last year, is understandably omitted on the grounds that his death feels too close. Friedrich Gottlob Frege and J.L. Austin, on the other hand, are nowhere to be seen for no reason other than that Critchley feels he could ‘find nothing particularly interesting to say about their deaths’. Marcus Aurelius is included, but Critchley, who is Professor of Philosophy of the New School in New York, forgets to mention how he died. A book of this size and structure necessarily favours epigrams and pithy exegesis, a deft comic touch that Critchley certainly lacks.

One of three patchy introductory essays makes the claim that ‘You will die laughing’ – a promise that is fortunately unfulfilled. Dead Philosophers’ tone is wildly uneven, as Critchley stumbles indecisively between puerile sniggering (‘Heraclitus suffocated in cow dung’) and a clear-eyed summary of Martin Heidegger’s Being and Time (1927). The book concludes – questionably and characteristically – with this tiresomely laboured entry: ‘Simon Critchley (1960–?): Exit, pursued by a bear.’