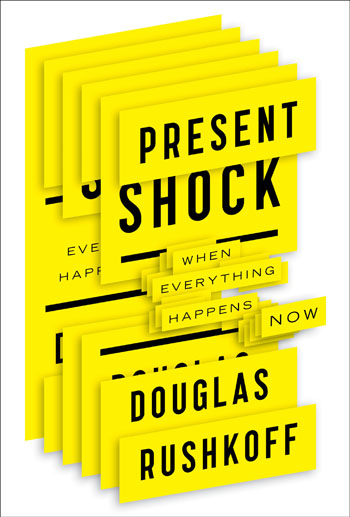 In the early 1990s, when I was about seven or eight years old, my father bought me a book about the world in the 21st century. It described future advancements in technology, even giving a timeline of when these developments would become available. While the book barely mentioned the Internet, it maintained that, by now, our cities would be paved with moving walkways in lieu of sidewalks and our fridges would be doing our grocery shopping for us. I’m still waiting for my flying skateboard, and I’ve been disappointed with the future ever since.

In Present Shock: When Everything Happens Now (Current, 2013), Douglas Rushkoff states that: ‘If the end of the 20th century can be characterized by futurism, the 21st can be defined by presentism.’ Rushkoff’s book takes place in a post-Alvin Toffler world. Toffler is the writer who, in the 1960s and ’70s, pushed the whole of society to become futurists; he recommended that children read more science fiction and that predictive skills may help protect us against what he called ‘future shock’ – the state of unreadiness to meet the future when it arrives. Rushkoff claims we have already arrived in the future and ‘That’s when the story really fell apart, and we began experiencing our first true symptoms of present shock.’

‘Present shock’ is an endemic syndrome in contemporary society: the state of unpreparedness to face the present future and the disorientation we experience when confronted by it. In Rushkoff’s examples, ‘present shock’ explains: television, in a fantastic reading of reality tv and YouTube videos, which Rushkoff delineates as the result of media saturation; personal schedules (with an amusing anecdote about double-booking himself due to a problem with Google Calendar); and even the recent recession – ‘Owing more on a 30-year mortgage than one’s house is currently worth is just another way of saying present shock.’

Rushkoff divides the book into five parts. The first looks into the collapse of linear narratives, especially in the media and in popular culture, and its political and social implications. The second section, ‘Digiphrenia’ (from ‘digital’ and ‘phrenia’, for ‘disordered condition of mental activity’), reads the results of over-availability, both of our time and labour and of data and information online. The third chapter focuses on what Rushkoff calls ‘overwinding’, which is the tendency to ‘lose the ability to distinguish between the different scales of time and begin to subject one level of activity to the time constraints of another’. In the fifth segment, the future becomes an ominous enigma as Rushkoff dives into the contemporary obsession with zombies, apocalypse and emergency preparedness.

The most impressive chapter is the fourth, which focuses on what Rushkoff terms ‘fractalnoia’, and looks at our ability to make sense of the world at a time of data overload. It includes a considered discussion of the way we create context today and how it is inspired by the Internet, as well as the way we use information on social media. It promotes creative thinking in our analysis of data and highlights the effects these have on our economy and consumer culture. (Rushkoff returns to a point he often discusses in the book, and on which he spoke in front of the us Congress last year during Computer Science Education Week: that children should be taught computer programming in school, along with inventive ways to assess information.)

How can we draw conclusions about the present? Rushkoff’s text is rich in narrative and references ranging from ancient theology to TED talks. He is an imaginative reader of contemporary (especially popular) culture, but his ‘present shock’ thesis is the glove that fits all. It considers the condition rather than its implication. For me, it also brings up a shameful sense of generational privilege: that even if all the miraculous futuristic things I read about as a child never materialized, the Internet did – as a tool for me to use, change and waste time on, rather than as a major shift to adjust to. Which led me to think: what should my generation be writing about? What kind of writing on technology and its influence on our daily lives should we be doing?

Technology undeniably changes the way we experience the world. The invention of the train in the 19th century is the classic example: it made travel accessible, altered people’s perceptions of speed and distance, and facilitated trade. Has the Internet done to our experience of time and linearity what train travel did for the 19th-century sense of distance?

Having internalized the Postmodernist idea of the collapse of grand narratives, networked thinking seems to be the catchall phrase we all use. It’s a helpful way of conceptualizing linked ways of organizing information but has been written to death. It’s time to start reflecting on the consequences of this thought process. There are so many complex conversations happening around the Internet and contemporary technology that need to be written about for their implications, rather than the state in which they implicate us. One such effect is the democratization and decentralization of power (think about the media’s obsession with the role of social networks in the Arab Spring, or the rise of the Occupy movement, supported by young, media-savvy intellectuals). The political repercussions regarding the accessibility of knowledge on education reach beyond activism (WikiLeaks being the obvious example) to affect the larger political arena and its policies. And the economic possibilities online and their effect on value, labour and remuneration, create a situation where work is unquantifiable – does answering email on one’s phone really count as work? – and its value can be abstract, as in the case of the public outrage which ensued from Instagram’s suggestion that it may begin to make commercial use of photographs uploaded to the site. These are but a few, quick examples, and I don’t think the Internet generates all these changes – rather, they are catalyzed by the way we use technology.

Anna Lundh’s web-based art work Q&Q 2022 (2012) is open on my browser as I write this piece and, intermittently, I turn my attention to the questions about the world in 2022 that were contributed to her project. ‘Will there be a world revolution?’, ‘Will we live prefabricated lives?’ and ‘Will pizza still be considered bad?’ are valuable in their own right: that is, they inspire us to imagine and, with it, to act. Futurism doesn’t seem all that bad if we can do something with the present – meaning write about it, analyze it, use its possibilities, not let it shock us.