The Great Contemporary Art Bubble, a new documentary from BBC4, claims to be ‘the film the art world doesn’t want you to see’ 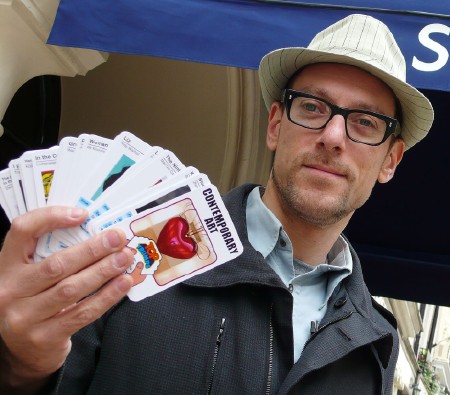 The recent tribulations of the contemporary art market deserve, and will hopefully receive, some extensive and thoroughly reported articles and books. These are unlikely to be by writers who have already alienated potential interviewees by writing newspaper articles entitled ‘Who Put the Con in Contemporary Art?‘ For now, though, there’s television, and there’s critic and broadcaster Ben Lewis. For those that don’t know him, Lewis purveys an alloy of Matthew Collings’ unthreatening faux-naivety and Brian Sewell’s philistine act, and his hour-long, apparently year-in-the-making documentary The Great Contemporary Art Bubble feels, similarly, carefully designed: aimed, specifically, at a broad audience now keen to warm itself around bonfires of vanities.

There’s a fairly linear narrative to be recounted and Lewis, flitting between London and Manhattan, tells it plausibly enough. Along the way he ticks off Charles Saatchi and yBa, the appearance of a particular wave of hedge-fund collectors around 2003, oil sheikhs, oligarchs, the rising power of the auction houses, the dubiety of dealers bidding on their own artists to protect their prices, and, of course, Damien Hirst’s sale of For the Love of God (2007) and briefly paradigm-shifting decision to sell directly through the auction houses in September of last year. Meanwhile, he tours collectors’ houses (internally gauging how cheeky he can appear, Lewis says ‘wow’ or ‘I wouldn’t get too many Gavin Turks if I were you…’). He regularly interjects whopping auction prices (at one point, he says ‘35 million’ and his voice slips slightly but tellingly into a salt-of-the-earth cockney accent, as if to position Lewis as the common man).

And he interviews… other commentators, mostly – such as market expert Godfrey Barker and Manhattan industry-newsletter publisher Josh Baer – and old pros. Powerhouse collectors Jose and Alberto Mugrabi deign to speak to him, and then toy with him like twin cats with a mouse. Baer happily articulates what Lewis needs his audience to hear: that the art world is rife with insider dealing. (‘Duh!’ Baer says repeatedly to Lewis’s knowingly simplistic questioning on this front.) Economists, way outside the magic circle and speaking of Warhol’s ‘screen paintings’, pronounce roundly on decline-and-fall from their book-lined studies; meanwhile, people who’ve already left Sotheby’s persist in defending prices and covering their own asses. Nicholas Serota, Damien Hirst, Jay Jopling, etc., remain blissfully unavailable for comment, as Lewis makes sure to mention; the Metropolitan Museum refuses to let its rooftop Koons display be filmed as a backdrop for a harangue about the market; and Lewis is banned from the Sotheby’s Hirst sale. Accordingly, he is able to infer that this is all a product of fear and collusion: what Lewis describes, in an article on the making of this programme on the blog of Prospect magazine, as ‘the Artworld Omerta’. It’s not his toxic reputation and transparent look-at-me temperament, it’s that he’s a crusader, a dangerous naysayer. For Lewis, who on film can come off as a distaff Nick Broomfield, a turndown is merely grist to his mill (and words for an article).

The Great Contemporary Art Bubble is certainly watchable TV, and engaging on the detail work, particularly on the show’s presiding obsession/exemplar. Lewis recounts his own recent-ish scoop of a list of unsold Hirst works totalling many millions, and the awkward responses he got from White Cube when he confronted them with it; he unravels, to some extent, the partial purchase of For the Love of God by a consortium of Jopling, Hirst and his agent, Frank Dunphy. Aside from the absent voices, there are other gaps and elisions. Lewis never really gets to grips with status anxiety as a putatively driving force among collectors. He talks to no artists aside from Tobias Rehberger, who gives him a miniature car to whiz around London in. A sort of ‘bubble car’ (and the show’s silliest visual conceit outside of the set of art-world Top Trumps cards which Lewis is seen fiddling with), this is, for Lewis, a great piece of art. Why? He spouts vague boilerplate: because it’s ‘colourful and witty’ and ‘taught you to see the world in a new way’. Rehberger, of course, is in exactly the same art world that Lewis castigates, and his electric car could be construed as a silly crossover bauble that’s as reflective of the times we’ve just been in. For Lewis, though, and utterly arbitrarily, it is major work. Or, like the ironic clips elsewhere of people predicting an artwork that sells for a billion dollars, this is a fragment of the film he was perhaps going to make before the market crashed. In any case, like the quick flash of a few of those ‘enthusiastic’ contemporary art reviews he claims to write routinely in the Evening Standard (for which Lewis provides bits of advertising elsewhere in the show, leafing through a copy at a newsstand), it allows him to credential himself as a sorter of the contemporary-art wheat from the chaff.

His default mode, however, is self-aggrandising, I’m-on-your-side-mate suspicion, which is why The Great Contemporary Art Bubble scents of both schadenfreude and pandering. It may also be why, from the title of his documentary onwards, Lewis makes no real attempt to separate out the activity of making art from the movements of the market, or the glitzy top tier from the whole organism, or ferret out the subtleties of the story (the auction houses have not been in a continuous nosedive in recent months, nor have all parts of the market moved in the same manner), or consider how the ructions at the top do or don’t relate to production and presentation per se. Yes, the format is restrictive. But the show, wherein the only visible artistic activity is the construction of a car for a TV performer, leaves one with the impression of the whole project of contemporary art as happily vanishing down the plughole: that project is, in one interviewee’s words, a joke, and one of the ‘corrupt aspects’ of a world we’re leaving behind. Don’t worry, dear viewer, because money has spoken and proved that you were right all along: the art was bad rubbish and the buyers were stupid, so good riddance. Watch The Great Contemporary Art Bubble here