In recent years, Camille Henrot’s anthropological scavenging has moved from India (The Strife of Love in a Dream, 2011) to the US (Gross Fatigue, 2013) to the Pacific Islands and now comes to Rome. In her travels, she seems compelled towards communities bound by faith and the images they produce to try and capture it. Rome, therefore, as epicentre of the Catholic Church and a key referece in Western art history, provides interesting pickings. Made over a year-long residency at the Fondazione Memmo, Henrot’s new bronzes and frescos comprise an exhibition called ‘Monday’ – a title that intimates the in-betweeness of the first weekday, with all its potential for lingering melancholy or renewed faith.

Symbols of power recur in Henrot’s bronze sculptures, fabricated in a Tuscan foundry and patinated in collaboration with expert craftspeople. At Memmo, these bronzes are placed against a backdrop of frescoes, painted wet-on-wet by Henrot in Japanese aquarelle, working together, metre by metre, with a specialist stuccoist. They fill the galleries of the three, wide, daylit exhibition spaces around the foundation’s courtyard. But, all is not decorum and grace. A strong sense of absurdity and humour underpins the works here. A lone outdoor bronze sculpture, entitled Dropping the Ball (all works 2016), for example, comprises a cartoonish foot perching on a ball, its fat, boneless leg arcing into a second, slimmer, footless limb. A diminutive cardinal’s cap sits preposterously atop this half-body, the whole thing mounted on a wooden base daubed in different shades of plaster. It’s a conspicuously informal support for an abstraction of two of Rome’s icons – the footballer and the cleric – a shape that conflates and deflates the two with brio. (The cap appears in several other works, including Punti Cardinale, Cardinal Points, where it’s scaled-up in bronze, polished, doubled and dangled from the ceiling.)

Inside the galleries, around these somewhat punctured symbols, images of women appear flattened by Monday blues. Henrot’s Derelitta (Derelict) is a bronze named after Sandro Botticelli’s 15th-century painting of a despondent woman, locked outside a palace. Henrot’s version is less inconsolable though, her horizontal squiggle of a body propped at one end by a pink bicycle tire. Beside it, Contrology lays flat on its (her?) back: a rectangular bronze slab with squared-off handles for arms and rounded legs extending upwards from the ‘body’, one foot that of a four-toed human, the other, that of a toad. The posture (and title) of this surreal, half-amphibian body alludes to Pilates principles of muscular strengthening through controlled movement, and the inelegant and wearying process of such self-transformation.

Metamorphoses are everywhere in ‘Monday’, particularly those that are encouraged in young women. The nine large, figurative frescoes (similar to the loose, Matissean style of Henrot’s watercolours shown at Metro Pictures in New York last year) read like a series of contemporary commandments, condemning such preoccupations as obsessing about horoscopes, cigarette smoking, body-toning and lying-in. Juxtaposed with her evocative bronzes, Henrot’s narratives read like a wry contemporary mythology of the female professional: religiously working out, self-obsessing and self-flagellating.

Articulated in Brâncus¸i-esque primitivism, No Message is a tall, abstracted figure that curls and slumps around the screen of a bronze-cast iPad or scaled-up smartphone. Next to this isolated body, craving communion, an unbroken horizontal line of colour extends along three walls at chest height, painted in watercolour with a wide, soft brush over a purpose-laid stucco base. Iridescent shades of pink and gold slip into one another and permeate through a lavender top stroke, the horizon vibrant and compelling. The gesture locates the artist’s body in the exhibition space far more explicitly than in her previous works, foregrounding her movement and toil. Here, among motifs of an imposing religious order, of female transfiguration and technology’s promises to connect us, this work evidences, if not renewed faith, then at least momentary release. 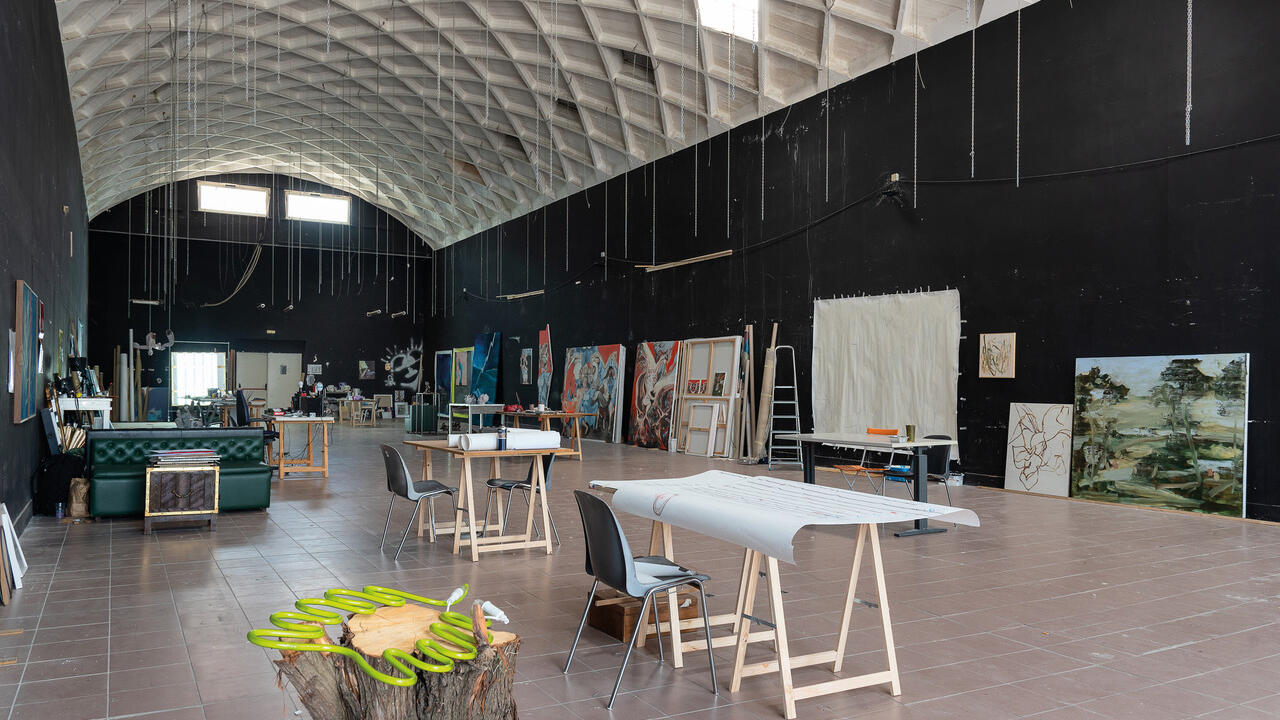