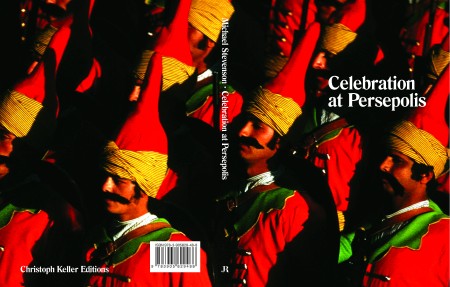 Celebration at Persepolis, the latest in the Christoph Keller Editions series, is a scintillating publication by the Berlin-based New Zealand artist Michael Stevenson. The small, cleanly designed, black and white book details a gripping tale of cloak-and-briefcase art dealings, a revolution, the dissolution of a monarchy and an opulent party beyond compare. The eponymous week-long celebration was held in 1971 on the site of the ancient city of Persepolis, and was intended to illustrate the grandeur of the 2,500-year-old Persian empire. The list of invitees who travelled to the Iranian desert for the event included kings, princesses, presidents, oil barons and all manner of hangers-on. The book is both the recounting of this mythologized event and an insight into Stevenson’s research process, usually borne out in his complex installations and sculptures.

Celebration at Persepolis is more than a document of the legendary party. It is, in part, about art, political propaganda and dictatorial regimes, which have made amicable bedfellows throughout the 20th century. During the oil price boom of the 1970s the Shah of Iran, His Imperial Majesty Mohammad Reza Pahlavi, while amassing one the world’s most powerful military forces, simultaneously spent much of his seemingly unlimited funds collecting and sponsoring contemporary art. His choice of artists (or rather that of his third wife, Her Imperial Majesty Shahbanou Farah Pahlavi, who steered his taste) perhaps surprisingly included such avant-gardists as Merce Cunningham, Iannis Xenakis and Andy Warhol. The Shahbanou was herself closely advised by the infamous art dealer Tony Shafrazi, who amassed on her and her husband’s behalf one of the most comprehensive collections of postwar Modernist art in the world. Following the revolution in 1979, in which the Shah and his wife were ousted by Ayatollah Khomeini, the collection was locked away in the basement of the Tehran Museum of Contemporary Art, where it has since been viewed by only a privileged few, its precise contents the subject of speculation.

While Stevenson’s disjointed paragraphs give an anecdotal insight into this moment in Persian history, the book also depicts another layer of the artist’s research: an installation, shown as part of ‘Art Unlimited’ at Art Basel 2007, which consisted of a 1:1 scale replica of a decaying structure that was one of the many purpose-built tents constructed for the celebration at Persepolis. The original, still in the Iranian desert, is now a skeleton, only a whisper of its former ostentation remaining. By exhibiting this installation at an art fair (and by elaborating on the process of its production in the book), Stevenson pulls the fable of the Shah and Shahbanou into a contemporary context. He stops short, however, of concluding that the fate of the Persian monarch awaits the currently heady art market. Instead, with a skilful knack for storytelling, he prods the reader to uncover clues as though in an old-fashioned murder mystery, dangling the suggestion, like the cluster of Warhol’s Silver Clouds (1966) which once bounced across the stage at Persepolis, that all great things must come to an end.