Kathy, by which I mean I, was getting married. Kathy, by which I mean I, had just got off a plane from New York. It was 19:45 on 13 May 2017. She’d been upgraded to business, she was feeling fancy, she bought two bottles of duty-free champagne in orange boxes, that was the kind of person she was going to be from now on. Kathy was met at the airport by the man she was living with, soon to become the man she was going to marry, soon, presumably, to become the man she had married and so on till death. In the car, the man told her that he had eaten dinner with the man she, Kathy, was sleeping with, along with a woman they both knew. They had also been drinking champagne, he told her. They laughed a lot. Kathy stopped speaking. This was the point at which her life took an abrupt turn, though in fact the man with whom she was sleeping would not break up with her for another five days, on headed writing paper. He didn’t think two writers should be together. Kathy had written several books – Great Expectations, Blood and Guts in High School, I expect you’ve heard of them. The man with whom she was sleeping had not written any books. Kathy was angry. I mean I. I was angry. And then I got married.

Two and a half months later, pre-wedding, post-decision to wed, Kathy found herself in Italy. She had been interviewed at the Register Office, she had not known her husband’s date of birth but nobody thought she, or he, were being trafficked. They were civil, they had chosen their songs, she’d insisted on Maria Callas because she didn’t operate via understatement. Now,  2 August 2017, she was sitting under a hornets’ nest  in the Val d’Orcia. She could have sat in several other places but she’d become fond of the hornets. Yesterday, two of them had fallen on her leg, still fucking. It was a good omen, her friend Joseph said when she emailed him about it.

She had a good routine going. First she swam twenty lengths, that woke her up. Then she drank coffee, then she arranged a sunlounger under the hornet tree. At ten she made her husband bring her more coffee. She hadn’t had a husband before but she knew how it worked. Was Kathy nice? Unclear. Kathy was interested in her tan, she was interested in Twitter, she was interested in seeing whether any of her friends were having a better holiday than her. Beside her, her husband was peeling off wet swimming trunks under a green towel. Everything was nicer than at home. Not  a little bit nicer, but profoundly, like every material  had been reinvented by a smarter species. Kathy and  her husband had accidentally gone on holiday with the super-rich.

They didn’t pass, obviously. They weren’t even trying. They ate their potato foam penitently, they spilled passata and plum-cardamom gelato down every T-shirt they owned. There was a laundry service but they were alarmed at the cost. Maybe they could wear darker clothes, or find a laundry in Rome.

It was the brightest day imaginable. Something weird had happened to the sky, it wasn’t clear or cloudy but somewhere in between. The light wasn’t concentrated in the sun, it was everywhere at once, like being inside a halogen bulb. Kathy had a headache. The internet was excited because the President had just sacked someone. Got hired, divorced, had a baby, and fired in ten days. Like a fruit fly, some joker wrote. 56,152 likes. None of it was funny, or maybe it all was.
Kathy had no parents, which didn’t stop them annoying her. She thought about them a lot. Her mother had committed suicide, her father had vanished before she was even born. She was an orphan, truly Dickensian. Her husband actually called her Pip,  sometimes the Pip. He was a very nice man, indisputably nice, everyone liked him, it was impossible not to. I always felt we were friends outside the poetry circle, his friend Paul Buck wrote, congratulating them on the wedding that still hadn’t quite happened and continuing with an anecdote about how he and Kathy had failed to have sex once.

It was getting hotter and hotter. 31 degrees, 36 degrees, 38 degrees. There were wildfires across Europe. One of them had been started by someone throwing a cigarette butt out of a car. Kathy stood neck-deep in the pool and thought about nothing. Wants go so deep there is no way of getting them out of the body, she’d written in the final paragraph of her last book. Her ear had become blocked by water and every hour or so it cleared for a moment and then quickly something rose up inside it like a thick wad of chewing gum, like a sock. It was unpleasant, the sense of something pressing at her interior, it dragged her down. In the bar her husband read a list of the hotel chef’s celebrity clients. Who’s Rachael Ray, he said, who’s Gloria Estefan, who’s Peyton Manning? She didn’t know who Peyton Manning was but she helped him with the rest.

Here’s what they ate. They ate porchetta in rolls and porchetta on rocket. They ate a kind of yoghurt cream dusted with lavender and tiny meringues. They ate rack of lamb and black cod and picci with pork ragù. They were definitely getting fatter. Have you noticed, she asked him, how everyone has younger wives here? It was like the second-wife club. Personally she was a third wife, so on that level at least she fitted right in.

What Kathy wanted currently was complicated to explain. She wanted three or four houses so that she could move between them. She was happiest on her travels, like a clockwork toy, maybe happiest unpacking or booking a train ticket. She liked to get in and settle down and she also liked to snap shut the door. She wanted to write another book, obviously, and she wanted to find a way of situating it nowhere. Nowhere like the interior spaces of the body, nowhere like the dead zones of a city. She was a New Yorker, she wasn’t meant to be in Europe, she certainly didn’t belong in a damp garden in England. The weeds were alarming, she was terrified of moths and mould. What she really liked was lizards, not just their tiny dashing feet but the way they were exceptionally dry. Kathy liked dryness, she’d always been the supplicant but now that she’d finally got things settled she was finding an abnormal talent for withholding, as if she’d finally become one of the many men she’d chased across Berlin, London, San Diego. In the 1990s, when she was young, she’d wept and sliced up her own flesh at the blink of an eye, she loved to get truly abject, but now she’d dried out, she was as cool and brown and flat as a piece of discarded toast, not appetising exactly, not desirable, but fodder for someone, a pigeon at least.

Was this getting older? Kathy was worried about ageing, she hadn’t realised youth wasn’t a permanent state, that she wouldn’t always be cute and hopeless and forgivable. She wasn’t stupid, she was just greedy: she wanted it always to be the first time. When she thought about the people she’d populated her youth with she cringed. She could have made it so much more glamorous, so much more debonair, she needn’t have had a bowl cut, she needn’t have worn dungarees, the minutes were passing, she’d failed to get a death-grip on time. Now she was cool, but old; now she was hot, but wrinkled. My life is delicate (more delicate than my cunt), she’d written to a boyfriend not that long ago. I’ve had eleven abortions, she told someone else, which wasn’t even true. Kathy was always lying, she’d lied since she was a small child with unattractive red hair. When her hair began to fall out because of the stress of living with her mother she told the girls at school that it had been eaten by her rabbit. At that school they had a playground game where everyone tried to hypnotise themselves and then lift someone’s body with just their little fingers. The girl about to be lifted had to lie flat and everyone had to press on her as hard as they could. After that the lifting was easy. Weightlessness was another exclusive possession of the very young. Later on you started clanking around like tins tied to a car.

Extracted from Crudo by Olivia Laing, published in the UK by Picador on 28 June and in the US by W.W. Norton on 11 September 2018. 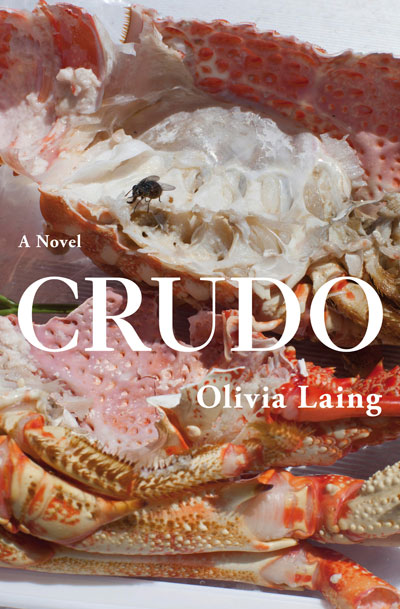