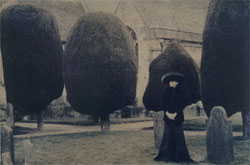 Deborah Turbeville, you might say, is the anti-Helmut Newton. Her most abiding images, the ‘Bath House’ series, produced for Vogue in 1975 (and reprised in the similar ‘Steam Room’ photographs of 1984), present models whose misty lassitude is the antithesis of Newton’s athletic automata. Turbeville’s early career as a fashion photographer depended precisely on a degree of suggestive blur (first spotted by Richard Avedon) that rendered her subjects – not to say the clothes that were the ostensible pretext for the pictures – so many excuses for conjuring an alluring haze. ‘I say yes to style,’ she said, ‘yes to mood, yes to ambiguity.’ But Turbeville also says yes to Art, and ‘The Narrative Works: Photographs 1975–1997’, the first UK exhibition of her photographs, continued her use of a wide variety of print sizes, rough or unfinished surfaces and scraps of attendant text. ‘I am’, Turbeville has also announced, ‘very avant-garde and extreme.’

In truth, a good deal of the work that she produced in the 1970s perturbs the fashion photography of the era only very slightly from its louche round of historical pastiche. At their least original or diverting (and allowing that Turbeville pioneered the style), her photographs are entirely of a piece with that decade’s mainstream revival of the styles of the 1890s and 1930s. Her models loll about in powdered morning light, glide through opiate afternoons and collapse, neurasthenic, to the hissing of summer lawns. Soft focus functions as a fog of longing, regret and debilitating privilege. The look may aspire to equal parts Luchino Visconti, Jean Cocteau and Rainer Werner Fassbinder, but the bathetic spectre of, say, Jane Seymour advertising cheap perfume c. 1978 is always at hand, winsome and strained. The tendency finds its absurd apogee in the ‘Unseen Versailles’ series (1980): luxury without a lick of degradation.

At her best, however, Turbeville suggests a more austere aesthetic: in key works of the late 1970s and early 1980s it is a look poised somewhere between the new hauteur of post-Punk and Kate Bush at her most authentically odd. The ‘Glass House’ series, photographed for Façade magazine in Normandy in 1978, hides its models behind the panes of a ruined conservatory; in one image they are scarcely there at all: mere memories of some idyllic (or institutional) past. When they do emerge into the light of an overgrown garden, they seem stranded between times, like World War II partisans suddenly signed up to an album deal with Les Disques du Crépuscule. In fact, much of Turbeville’s oeuvre is in love with a notional Mitteleuropa; a particularly resonant (if also quite fantastical) zone for the style culture of the late Cold War.

In other words, if these were indeed ‘narrative works’, it seems they were mostly ghost stories. The vague sense of historical distance that pervades the most haunting of Turbeville’s photographs is deliberately contrived to confuse: there is rarely an actual period being evoked (hence the weaker works’ tendency to nostalgia or kitsch when they seem too seduced by a particular decade). ‘Women in the Woods’, a series that appeared in Italian Vogue in 1977, places its models at some disorienting remove even from each other: two women flank a pallid stretch of woodland puddle, as though they actually inhabit quite different moments, brought together by a devious fold in time. And in a series taken in Kraków in 1982 a pair of middle-aged male twins enact theatrical games with two young women, that call to mind Hans Bellmer manipulating his eerie dolls, or a scene out of Edgar Allan Poe or E.T.A. Hoffmann.

All of these images, as ought to be obvious by now, operate at a level of self-conscious melodrama that is intensely adolescent. Turbeville catches exactly the cast of a certain late-adolescent image repertoire: turbid desire mixed with a botched, impossible nostalgia for childhood, the whole excitable amalgam expressed as an overeducated Gothicism. It’s a perennial theme of fashion photography, but she more or less perfected it. Which makes her conspicuously clumsy addition of handwritten quotations from certain almost decadent writers – Marcel Proust, Gérard de Nerval, Bruno Schulz – either a stroke of knowing whimsy or a touch of sincere ambition too far. I suspect, unfortunately, that it’s the latter: that Turbeville means it when, citing Nerval (who wrote more interesting things than this), she inscribes the legend ‘the dream is a second life’. Fashion photography, even (or especially) great fashion photography, is never quite aware of the aspirations and contradictions it embodies: forces that some rather precious faux-literary footnoting will not quite dispel.