[member:membership-name]
[member:full-name]
VIEW MY DASHBOARD
BY Will Bradley in Frieze | 04 MAR 07 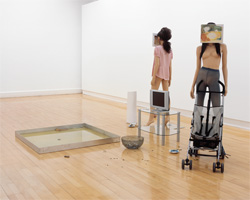 Many of Cathy Wilkes’ installations can be read, in some sense, as self-portraits, albeit ones where the idea of self is fragmented and dispersed, constantly being recovered or assembled from a web of memories, associations, histories and blurred symbols. The impossibility of unambiguously representing individual human experience is itself put on display, examined and offered as the basis for a mode of representation; an aesthetic that requires a consideration of the social conditions and codes that substitute for this unreachable connection.

One of the most striking shifts in Wilkes’ recent work is the introduction of female mannequins, objects that could easily be read as stand-ins for the artist. It’s a development, however, that has been prefigured by the many symbolic manifestations of the human body in the artist’s past works, from the long wooden table of Beautiful Human Body (1999) to the stripwood armatures that featured in her exhibition at Inverleith House in Edinburgh in 2002. The artist has since moved away from these constructions, which acknowledged early Modernist sculptural abstractions of the human form while attempting to augment their mechanistic reductivism with materials or gestures that reintroduced the idea of individual or social psychology into what was a fundamentally materialist formal language. Her recent installations comprise mostly found objects, things that were once industrial products but are now placed in precise but unexpected relationships that suggest the scattered debris of a psychological moment in an individual life. In keeping with this, the faces of the mannequins – perhaps at one point falsely imagined by their designers as representing generic or idealized facial features – are hidden by paintings, or even, in one recent installation, a battered white crash helmet; a cover-up that, if applied to specific human faces, might read as the replacement of the individual by a culturally determined image, but which, here, is the displacement of an imaginary archetype by a specific imagination.

In these installations objects are, at least notionally, lifted out of their intended circuits and set down in almost Surrealist tableaux, whose apparent dream scenes are not organized by strict Surrealist principles of unmediated subconscious association but aligned according to the requirements of a more directed investigation. In one of the most highly charged conjunctions, a mobile phone sits in a shallow metal tray part-filled with petrol, the smell of which fills the room: an immediate trigger for a feeling of unease and threat. The half-floating, defunct phone, which could be read as a dead body, suggests, of course, a difficulty in communication, but also offers the image of a productive abandonment, the rejection and potential immolation of a technology that has remade the relationship between the individual and the network, that has broken the distinction between private and public, between communication and surveillance. But the trashed phone is only one of a series of hi-tech products whose future obsolescence is depicted but, more relevantly, whose current utility as conduits of both the image and reality of a certain conception of society is contested by their appearance as disconnected or, in contemporary slang, ‘bricked’ shells that appear in Wilkes’ works blank and orphaned on slick glass tables or half-drowned in oil or water.

Many other carefully selected items – from prams and smudged mirrors to power tools and the used containers of so-called beauty products – show up in Wilkes’ art, but not as a Beuysian system of totems tied to hermetic experience and the mythologized body of the artist; they are more like its opposite – an attempt to engage with a system of objects in full knowledge of the complex meanings and relationships such a system can produce. Wilkes certainly deploys plenty of personal symbolism, with objects and themes that may have been lifted from her domestic life recurring and developing from one installation to the next, but always present is the suggestion of an autonomous cast of characters caught again and again in scenes from the same stylized psychodrama, a theatre in which they’re both the players and the set.

This doubling – where objects can be read as both specific and generic, metaphorical and actual – carries through to the inclusion (or, weirdly, considering we’re talking about a things in a gallery, intrusion) of painting and drawing, unequivocal art pieces that serve to crack the already tense relationship between the gallery space and the abstracted domestic interiors, studios, workshops and street scenes that Wilkes’ installations describe.

The space of modern art – of art for art’s sake, aesthetic contemplation and bourgeois game-playing, of false traditions and a constant striving for forms whose sole unifying characteristic is that they have currency in a self-referential market-place – is collapsed in Wilkes’ work to a thin, artificially imposed border between two spheres that might otherwise merge productively. On one side is a pursuit of personal expression that attempts to materialize a process of decision-making that hopes not to be assessed, or even understood, but felt – to constitute part of an imagined but unrealized social system in which its particular language, dependent on shared experience, addresses a community that has perhaps yet to be brought into being. On the other is a theatrical space: the gallery rethought as a place in which to consider why and how you have been brought here, to consider the otherwise hidden relationships that underlie, or in large part constitute, this temporary interface between artist and audience.

If Bertolt Brecht’s ideas of drama and alienation were to be transferred from the theatre to a contemporary art gallery, they might look something like Wilkes’ work. There’s a shared belief in the form, the medium and the process as offering something worthwhile whose loss would be unsupportable. This is coupled with a recognition that, under current conditions, form is compromised and cannot be allowed to function seamlessly, that those conditions cannot be unquestioningly accepted. Dramatic tensions, passages of action, allusions to and allegories of modern life are constructed and developed. The history of the form is understood and acknowledged, but any potential unity is disrupted and denied – not completely, but to a calibrated point close to the limit of what the conditions will support, intentionally describing an edge beyond which the space of illusion, of image, must give way to the space of action and effect.

Beyond this edge lies Agit-prop – gestures that have to leave behind the potential of art in order creatively to augment the language, to offer new configurations or ways of making meaning that may be able to articulate things previously unsayable. The precision of Wilkes’ work seems to come from the intention to find, or suggest, scenes in which the socially understood meanings or functions of objects are disrupted but can co-exist with their participation in these other networks of signification.

Wilkes’ work could certainly be read without reference to any history of feminist thought, without any connection to a history of experiments in art, formal or otherwise, that hope to add to the language of art a vocabulary in which to express or incorporate the complex and loaded relationship between the material conditions in which art works are made and the conditions in which they are shown. It could be discussed without any suggestion that there might, in the not-too-distant future, exist a situation in which such relations will be reframed; it could be encountered without any immediate sense of an intense but lost connection or reintegration waiting to be activated once these and other related conditions have been confronted and overcome. And without these things, much of what remains is the simple presence of the stuff itself, resisting any easy incorporation into the proscribed narratives of contemporary art. But that ambiguity, that resistance, is what allows Wilkes’ work to offer, somehow, the possibility of escape. Will Bradley is Visiting Curator at California College of Arts in San Francisco.