From Hollywood thriller and 11-hour Filipino epic to Minimalist monuments in celluloid, favourite films of the year 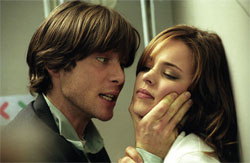 A freelance journalist and critic based in Berlin. His book Orson Welles (Zsolnay Verlag, Vienna) was published in June.

The two films I found most interesting in 2005 could not have been more different from one another: a Hollywood thriller that many of my friends thought was simply generic, and a political epic from the Philippines that was on limited release. Both appeared, literally and virtually, at opposite ends of world cinema.

I didn’t expect much when the curtains in the lush Multiplex in Berlin’s Sony Center opened to Wes Craven’s Red Eye. But this fast-paced little nightmare turned out to provide everything that blockbusters in 2005 didn’t. Lisa, a girl on a late flight, is taken hostage by the man in the seat next to her (who has also kidnapped her dad back home in Florida), because he needs her to rearrange the hotel accommodation for a Homeland Security politician, who is obviously an assassination target. Most of Red Eye takes place at the airport, on the plane and immediately after landing. Towards the end there is a terrorist attack, but it is up to trapped and seat-belted Lisa to sort things out and save the day. What I admire about Red Eye is how it unravels the complicated and claustrophobic plot structure of a TV-series such as 24 and transforms it into something that used to be called a ‘B-movie’. The film gave me an indication of how cinema might have felt back in the 1940s, when Fritz Lang depicted ordinary people going off the rails.

Hollywood has always been the norm that auteur cinema could inscribe itself into, or deflect from. The 11-hour Evolution of a Filipino Family (2004), by 48-year-old Lav Diaz, is in every sense a ‘home-made’ film, in a way that has only become possible in recent years. Shot over a period of almost a decade, on black and white 16mm film and digital video, the original storyline about a boy landing in the USA and facing the ghosts of his homeland ancestors in New Jersey was dropped and resurfaced as a separate work in the five-hour Batang West Side (2002), a bleak meditation on the Filipino diaspora. Evolution of a Filipino Family is about the Gallardos, three generations of rural people with loose connections to a rich family branch in the city. Kadyo, a man who is imprisoned under the Marcos regime, is at the centre of a complex narrative that encapsulates the political agony of the Philippines between 1971 and 1987. Diaz employs the orthodox Neo-Realist long shot as his basic stylistic element but switches to hand-held camera whenever he needs to allude to mental states. The protagonists appear to be haunted by traumatic losses. Evolution includes archival footage (for example, of the assassination of the popular politician ‘Ninoy’ Aquino, which eventually led to the downfall of dictator Ferdinand Marcos), popular radio dramas and an uncanny subplot involving Lino Brocka, the most influential Filipino filmmaker. (Gino Dormiendo, a contemporary critic, plays Brocka, who died in a mysterious car crash in 1991.) By weaving together all of these strands and then editing it into a complex, anti-teleological ‘national history’, a totality of the Filipino experience in the struggle for democracy and dignity, Diaz is in fact working on the evolution of political cinema itself.

January 2005, the International Film Festival Rotterdam. Film festivals can be awful places; there’s nothing quite as imprisoning. (Well, maybe prison.) How delightful then, it was, to take Une Visite au Louvre (A Visit to the Louvre, 2004) with Jean-Marie Straub and Danièle Huillet. At 45 minutes, the film must be experienced twice, watched back-to-back, in French, without subtitles. (Or are there two separate films? The difference was imperceptible.) As the title promises, various paintings in the Louvre – by Jacques-Louis David, Jean-Auguste-Dominique Ingres, Eugène Delacroix and Gustave Courbet – were filmed, each spectacularly rich and precision-framed on the screen. A gruff woman narrates the voice-over, revealing ‘herself’ at the end as the voice of Paul Cézanne. I understand some, though not much, French. Picking out only occasional words, I had the sense that these descriptions of the gestures and colours of paintings – and experiencing the limits of my understanding of them, twice – are also an apt description of cinema. The film’s (or films’, even) rigour, lucidity and beauty, combined with the period we’re given to view it (or them), foreshadowed James Benning’s latest films, shown at The Times bfi London Film Festival in October.

Benning has long been recognized as a maker of painterly films. 13 Lakes and Ten Skies (both 2004), his two most recent works, mark the pinnacle of this, but are also acutely Minimalist monuments. In the first film, we see a series of 13 lakes, each separated from the next by a black screen, and each shot from a single, fixed camera position; the frame is perfectly divided between sky and water, and is on screen for ten minutes, to an approximately synchronized soundtrack. In the second, we see ten skies, each one also shot from a single camera position and on screen for ten minutes, accompanied by an ambient soundtrack of off-screen activity recorded in cities, suburbs and the wild (which were taken from previous soundtracks of his films). Introducing the National Film Theatre screening of Ten Skies, Benning talked about both of these films as being requests to pay attention, and argued that this paying attention is political, critically so.

Oliver Payne and Nick Relph are two artists I’ve known for a long time – even before they started at the art school that (literally and metaphorically) failed them. I spoke the voice-over for their 2003 video Gentlemen. In September, on the last day of summer, their first solo show in a major UK public museum opened at the Serpentine Gallery. Included was one new work, Sonic the Warhol (2005), another not shown in London before, Comma, Pregnant Pause (2004), and everything else they’d made to date. I went early to the opening and felt the pleasure of seeing a coherent body of work that combined visual integrity and exquisite colour with literary strategies.

Other films that had no less of an impact: L’Éducation Sentimentale (2005), by Jimmy Robert: re-worked versions of pieces by Bas Jan Ader, a romance concerning something shared that is precise in its explorations; the brilliant queer videos of General Idea, courtesy of Stuart Comer at Tate Modern for the London Lesbian and Gay Film Festival; and Catherine Sullivan’s The Chittendens (2005), also at Tate Modern – exemplary, structured, multi-screen, gestural, difficult delirium.

Am I looking forward? I am, and I am implicated in it. A series of four programmes stemming from Anthony McCall and Andrew Tyndall’s 1978 film Argument, which I’ve curated with Mike Sperlinger from LUX for London’s Whitechapel Gallery. Argument is text as image, image as text, The New York Times unpicked into an inflammatory tract that reflects the situation now as much as then while questioning what avant-garde film might mean; its prejudices, sustainability, incestuousness, possibility, impossibility. Necessary.