Carmen Winant
All of your pictures are shot on 4× 5 film, scanned and then post-produced in Photoshop. Why work across multiple formats?

Lucas Blalock
Early on, it was important that the pictures had a foot in both the analogue and the digital. When I began making pictures in the late 1990s, I fell in love with the 4 × 5 camera. But analogue is not so significant to me anymore. I am more interested in the way in which it affords me moments of translation.

CW Between analogue and digital processes?

LB Yes, such as processing the negative through the scanner into Photoshop colour-space or removing the dust. Procedures like those, and others, become over-articulated in my process. Instead of approaching these procedural steps as expected, my action might be more evident, or less correct. As opposed to painting, which is considered to be an accumulation of a set of decisions, photography is classically thought of as a picture made by a single decision – the shutter – and that Photoshop or the darkroom is a kind of ‘post-production’. For me, the state of the photograph is much more in the physical object and I tend to think about all of these steps as stages of production.

CW Your work is reminiscent of surfing the Internet for images for hours on end, or of being on hallucinogenic drugs. Both of those experiences are alienating in their own way: hyper-real and hyper-false. In your work they appear to co-exist.

LB I started to think of the real and the false in this way partially through Jean-Luc Godard, which, in turn, led me to Bertolt Brecht’s ideas about theatre, and gave me a model for thinking about photography. I am interested in how I can use the technologies of picture-making, intended to be highly transparent, in opaque or interruptive ways. Offstage tools – studio, camera, Photoshop – are brought back onstage, and into the picture.

CW Your pictures feel like spatially jagged narratives within a larger plot. Were you a Godard fan before making pictures, or do you feel the influence was more circuitous?

LB I’ve been a fan since I first saw Breathless (1960) when I was 18. Though I love a lot of his contemporaries, the energy in his films has always been my favourite. It was in thinking through Godard that I began to establish some of the terms for how I work.

LB I remember reading in Godard on Godard (1986) the treatment for A Woman is a Woman (1961). It basically reads: plot point, plot point, gag, plot point. It is literally written: ‘gag’. It was a revelation to think about a film having such a simple structure. This skeleton could make anything be a space for a little performance, or a moment of humour. When I make a picture, I don’t have a tight script. My photographs are laboured in the sense that they involve a 4 × 5 camera, lighting and so on. But the production is very much done on the fly. Certainly, the apparatus could be a lot smaller; I could wander around with a hand-held camera making pictures on the move – that would be more recognizable as the traditional photographic improvisation. But I am interested in locating the place where tableau and accident meet. Between the two, I am always trying to veer back towards the accidental, letting the situation make the picture. 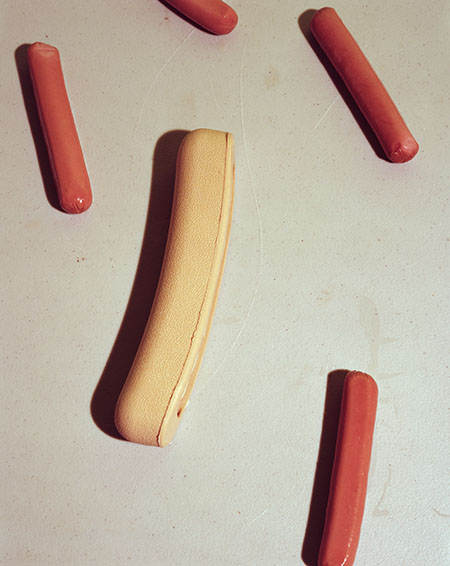 CW There has recently been a huge swell of young artists making abstract photographic images, ranging from pure abstraction to tableaux, or a kind of diorama-making. Is photography having a love affair with painting?

LB Photography is in a very insecure moment that I think is exciting. Without wanting to make big generalizations, I will say that there is a lot of interest in figure/ground relationships at the moment, and working with the idea of a ‘model’, which are both traditionally painting questions. For many years in photography, paper felt incidental; it was just where the image ended up, though it would be wrong to say that the photographic print doesn’t have its own history. I think there is a general attempt to look for a foundation. At times, this feels like a search for a Greenbergian canvas, or flat plane, for photographers. That curiosity – which oscillates between interrupted seeing and flat picture-making – has mirrored painting. I am not particularly interested in abstract photographs as such, although I am interested in what the activity is trying to dig up.

CW There is a lot of discussion about the Constructivists and early 20th century art as influences for younger photographers, but I wonder if this current tendency is also bound up in more recent history? I graduated from ucla in 2006, where my photographic education largely consisted of New Topographics, the Düsseldorf photographers and the Vancouver School. These movements were founded in their rigid devotion to depiction. A lot of emerging artists, I can only assume, had a similar education to mine. Do you think there is some desire to push back against that?

LB I studied under Stephen Shore at Bard College so, in some ways, I got the most classic photographic education possible. I graduated in 2001; Andreas Gursky was having a show at the Museum of Modern Art, New York, and Jeff Wall stood above a lot of us. Those were the pictures that we were trying to figure out how to make. Photography was having a very spatial moment a decade ago, which has since shifted to a more informational one. Of course, thinking about photographs as depicting information is part and parcel of their history, but with the emergence of digital technology, there has been a real push to sort out both the information in the picture and also the information the picture itself is made of. This shift has opened up a big space for these sorts of projects. It has also meant that a lot of the work which felt relevant ten or 15 years ago seem less pertinent. I think you’re right, that there is some serious generational rebellion going on too. But, in another light, I also think that photography is maybe the last art out there that you can do right: there are rules and expectations, ways to do it correctly. Which I think begs for people to do it all wrong.

Lucas Blalock is a photographer living in Los Angeles, USA. In 2012, his work was included in ‘New Pictures of Common Objects’ at MoMA ps1, New York, USA. Forthcoming solo shows include: ‘Inside the White Cube’, London, UK, in May; and Ramiken Crucible, New York, in September.