‘All my work might be about vessels, the idea that everything is contained by something,’ says Laura Aldridge, standing amid ‘California wow!’, her installation in the former transport shed of Glasgow’s Tramway. The statement is perplexing at first, as there’s only one actual vessel on show, Biggest Pot (2015), which was glazed to Aldridge’s design by the virtuoso ceramicist James Rigler (showing contemporaneously in an adjacent gallery). The colours of the la landscape – grape red, sea blue, bleach white – ooze into one another, like the layers of a Tequila Sunrise.

The three plywood structures entitled Large Bodies (2013–15) are punctured by a curved gap that is filled with cushions and, at a stretch, could contain a person. Indeed, I’m tempted to hop inside myself, but am told by an attendant it’s not allowed, which Aldridge confirms. This isn’t a strategy of frustration per se, she says, but a way of encouraging visitors to ‘think about perception’. And it works: looking at the elegant diagonal heft of one pod-like space, I’m suddenly conscious of my weariness, the throb of my feet. Not My Elbow (ix) (2015) – layers of dyed rice held in a plastic cylinder, open at the top but crowned with a twist of bisque-fired plaster – produces the same effect. The conjunction of smooth barrier, exposed surface and the ceramic’s flourish, makes me want to run my fingers through the rice, imagining the hiss of the grains. As in the work’s title, physical sensation is elicited but displaced. It almost amounts to a mild kind of synaesthesia, enmeshing one sense with another, making touch a business of hearing and looking and imagining, as well as of palpable contact. While we’re talking, Aldridge mentions someone she’s met whose vision cuts out if they hear sound of a certain pitch: a participant in one of the workshops she runs for the non-profit organization Artlink, which seeks to find ways to communicate with people with sensory disabilities and learning difficulties through art-making. When Aldridge describes ‘California wow!’ as ‘a conversation through materials’, my mind turns to this.

At Glasgow’s Centre for Contemporary Arts in 2012, Aldridge displayed another series of con­tainers: oversized fabric pockets, some fastened with giant pantomimic buttons. Entitled ‘Underside, backside, inside, even’ (2012), the series played around with the spatial expectations of sculpture. (Where’s the back and where’s the front? What’s the core of a work which declares itself hollow?) It also made a physical address: like a gargan­tuan kangaroo’s pouch, each pocket seemed, as in Large Bodies, to want to hold the weight of a human. Even the imposing patchwork fabric ‘banners’ that Aldridge showed at Kendall Koppe in 2012 are charged with a sense of the portable. Initially inspired by the advertisements that hang from lampposts throughout la, they look as if they could be borne aloft in a procession; moreover, when talking about their importance to her recent work, the artist describes the appeal of a form that she could ‘fold up and put in a suitcase and carry with me’. 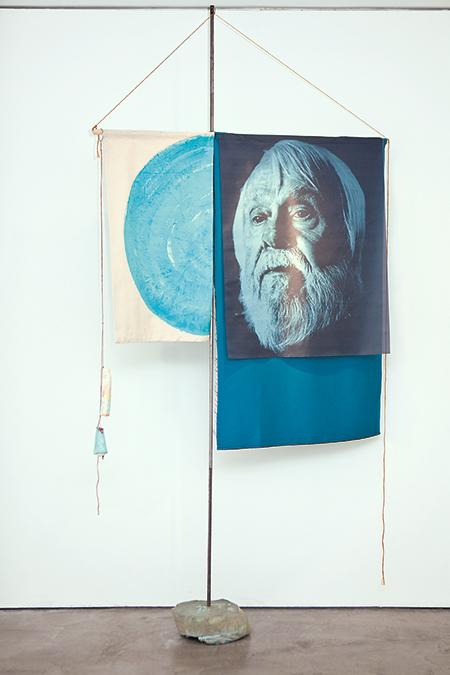 Many of the images that are printed on fabric at Tramway together form a kind of scrapbook encyclopaedia of how something might be held: an egg clasped just so between fingers in Purposeful Abstraction 1 (2015); the way beer sits inside a glass in The Matter of Things (2015); a pine cone, its load dispersed in Rolls (2015). Thinking about the Mobius-like muddle of inside and outside animated the Tramway show from its inception: when visiting the empty exhibition space, Aldridge says it felt as much like an open landscape as an interior; hence California, where, they say, everyone lives half-inside and half-outside. Composed of pink Perspex screens, Aldridge’s Seemingly (viewing) (2015) (co-designed with architect Iain MacLeod) looks a little like a neon hologram of Pierre Koenig’s Stahl House. The artist calls it her ‘California House’. A structure within a structure, it bluntly dramatizes how physical position attunes perception: standing within it, the whole installation quite literally takes on a new cast.

Given that Aldridge’s work transitions between outer and inner, it’s no surprise that it should finally implicate the body: the original bounded system. Transmission (or, you can eat an orange if you leave me the peel) (2013) comprises digital prints of an unpeeled orange and a human navel placed on wooden blocks, with ceramics resembling oranges and scraps of peel littered around them. At Tramway, two digitally printed silk hangings, Taking back our bodies (refund please) (2013), record excerpts of letters between Aldridge and Studio Voltaire director, Joe Scotland, trying to describe the anxious flux of feelings that being in a body brings: ‘I can feel my body in relation to my mind / I can feel my body in relation to the floor’; ‘To enjoy another person’s body / I think that you have to enjoy your own.’ In Seemingly (pushing) (2015), a woman re-creates a pose Aldridge came across in a fashion magazine: a model’s fingers are poised awkwardly at the front of her mouth – the digits could be pushing in or pulling out, eating crisps or performing a silk-scarf trick.

Aldridge’s work thrives on the threshold: neither fully static nor mobile, painting nor sculpture, there’s a sense of an aesthetic constantly reaching out, encompassing disparate material and forms. Her ethic seems not just inquisitive, but somehow deeply sociable. I’m thinking not of her many literal collaborations, or even projects like Openaries (2014) for Glasgow International, for which artists were invited to cast and perform arounda travelling kiln, but the gregarious crossings-over at the most basic material level: how a banner positioned near the ‘California House’ glows with some of the pink it sheds; how some clay shapes pick up stains from coffee, seaweed, salt; how towelling drinks in the paint splashed across it; how dye is soaked up by rice. It’s another form of that conversation: one-to-another, tête-à-tête, hand-in-(imagined)-hand.

Laura Aldridge lives in Glasgow, UK. Earlier this year, she had a solo exhibition, 'California wow!', at Tramway, Glasgow. In 2014, she had a solo show at Andrew Kreps Gallery, New York, USA, and her work was included in Glasgow International (with Anna Mayer) and in group shows at Rob Tufnell, London, UK; Greene Exhibitions, Los Angeles, USA; The Travelling Gallery, Scotland, UK; and The Basement at Paradise Row, London.