The Forever Now: Contemporary Painting in an Atemporal World

Featuring multiple works by 17 artists in different media – from soap and wax to ink and synthetic polymer, and good old fashioned oil on canvas – ‘The Forever Now: Contemporary Painting in an Atemporal World’, curated by Laura Hoptman, staked its premise not upon the varied matter of materials, but the fungibility of temporal allusion. Purporting to channel the ethos of the internet and its aesthetic upshot – repetition and pastiche, rather than a succession of clearly demarcated styles – the exhibition claimed to capture a slice of hyper-post-modernity. The works on display indeed skirted any single school or mode. Yet, with few exceptions, the paintings bore little detectable truck with some new phenomenology of time – even an atemporal, web-driven one. With a thronged homage to Henri Matisse across the hall in the museum, it is the exhibition’s ‘Forever’ that perhaps struck the most resonant note, reminding visitors that – in spite of the various assaults upon its continued existence or pronouncements of its obsolescence – the métier of modernism’s great masters remains alive and well.

Several works by each painter – nearly all of them under 45 and working in the US, with a few from Germany, Columbia, or other countries – afforded a sustained engagement with their respective projects. These ranged from Kerstin Brätsch’s suspended glass lattices, to Oscar Murillo’s canvases strewn on the gallery floor, inviting touch. By turns hung and stacked around the exhibition’s entrance, Brätsch’s other large-scale paintings greeted visitors upon reaching the sixth floor. Feathered and marbled with undulating whorls of paint, the canvases appeared pinned between outsized glass frames like large, nacreous butterflies – rhyming with the cryptocrystalline slivers of minerals that appear suspended between glass plates in Sigi’s Erben (Agate Psychics) (2012), erected in the exhibition’s main gallery.

Just around the corner hung some of the show’s most striking works: Rashid Johnson’s sprawling ‘Cosmic Slop’ series (all 2011), their waxy surfaces bone-dry yet seemingly slaked with a wet sheen. Scored with lines, the works recall a painterly process, even as their marks appear neutralized by the thick and viscous medium. If The Berlin Conference reveals subtractive grooves reminiscent of gestural brushwork, Backyard bears impasto-like lumps and pits, while Black Orpheus is marked by the remnants of splashes and splatters. Johnson’s formalism stands in elliptical relation to his allusive titles, though The Berlin Conference – which refers to the notorious 19th-century ‘carving up’ of Africa by the European powers – perhaps also makes literal its proverbial divisions. 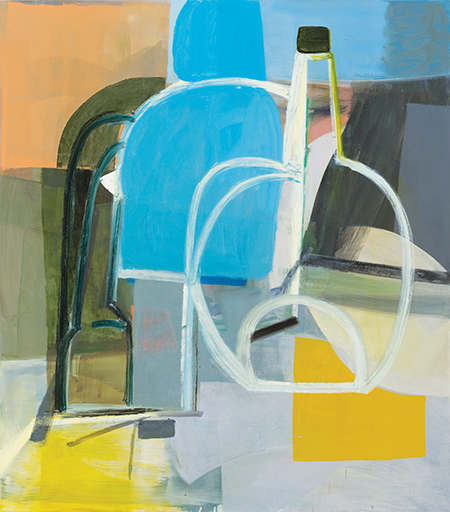 Michaela Eichwald’s canvases likewise incorporate wax and evoke scrawls on a wall, though she reconciles these more overtly to the legacies of gestural abstraction (visible, too, in Murillo’s more layered, geometric improvisations, these hanging on the wall). Like tracings by some minimalist Jean-Michel Basquiat, Joe Bradley’s grease pencil drawings on unprimed canvas – a cross, a Superman sign, the number 23 – conjure up graffiti as well, though they looked rather wan in execution and concept in the wake of stronger work nearby. The large canvases by Ethiopian-born American artist, Julie Mehretu, for example, reveal a mesmerizing play of grey and black with a similar economy of means, smeared into a frenzied cursive of mark-making that refuses to congeal into sense or sign. Across the room, Mark Grotjahn’s abstractions burst into a kaleidoscope of wedges and flanges. If his ‘Untitled (Circus)’ (2012) series began from a reproduction of Georges Seurat’s eponymous painting hanging in his studio, its vortex of forms now evokes everything from Joseph Stella’s Brooklyn Bridge (1919–20) to the anatomies of Pablo Picasso’s Les demoiselles d’Avignon (The Young Ladies of Avignon, 1907).

The spectre of 20th-century primitivism haunts Nicole Eisenman’s painted faces more manifestly. Over the swarthy visage of Guy Capitalist (2011) float collaged images of African and pre-Columbian sculpture, while a miniature bowler hat sits perched comically atop his head. With Untitled (Head) (2014) and Still Life 2 (2014), Amy Sillman reveals a facility with a cubist genealogy of a different sort, its facets filtered through the likes of Philip Guston and Richard Diebenkorn and lent a new, vital life in her able hands. Dianna Molzan’s work also evinces something of Guston’s, though in its abstract phase; her Untitled (2012) sets a tightly knit cluster of multicoloured forms on top of a gossamer layer of silk. Untitled (2010) and Untitled (2011) further highlight the artist’s knack for unorthodox supports: in the former, a canvas cut laterally in thin slices, its strips now drooping with their own gravity; in the latter, a frame replaced on its left side with a stuffed tube of (painted) canvas, confusing border and image in a manoeuvre at once simple and thought-provoking. Less convincing was Charline von Heyl’s nod to Lucio Fontana in Concetto Spaziale (2009), which restores to her canvas – and its maelstrom of whiplash forms – a material integrity (in)famously violated by Fontana’s pen knife. 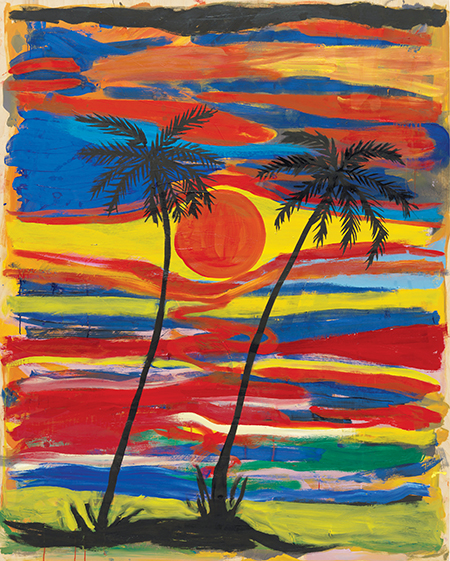 A certain irony obtained in this implicit mending of Fontana’s slash – an oblique indication, perhaps, of painting’s enduring pull. That said, nowhere did the show’s focus on painting feel spiteful or valedictory, nor did it devolve into some orgy of too-cute 1980’s-style citation. (Reading Peter Schjeldahl’s review in The New Yorker, in which he detects notes of ‘rankling self-consciousness’ and ‘nonchalance that verges on contempt’, made me think we had visited different exhibitions altogether.) To be sure, Richard Aldrich’s Angie Adams/Franz Kline (2010–11) obliged with a ‘sampling’ of an ab-ex luminary crossed with pop-culture references; and Josh Smith’s wall of canvases (all Untitled, 2007–13), hung poised between irony and earnestness, pastiching kitschy palm tree scenes and abstraction alike. But is such insouciant simultaneity really the product of the internet age’s accelerated synchronicity? Pitched at an angle from the wall, Matt Connors’s towering triptych, Variable Foot (2014), turns the primary colours into a Day-Glo homage to Elsworth Kelly, Barnett Newman and Aleksandr Rodchenko (to name just a few) all at once, even (or precisely) in its minimal means.

‘These are the hottest young painters on the market.’ Thus cooed an older gentleman to his companion in MoMA’s cloakroom queue, arriving as I left, plainly chuffed that they were about to lay their fingers on the proverbial pulse of the New York art scene. That MoMA might serve as the market’s unadulterated conduit is arguable indeed; that this exhibition assembled all of its painterly stars more dubious still. In the light of the show’s somewhat clunky premise, its selection of artists seemed all the more arbitrary. ‘The Forever Now’ laid no claim to be a comprehensive survey. And yet the premise on which it was founded bore only a vague relation to the (largely strong) work on display. Hardly anything on the walls looked like the ‘atemporal’ fruit of a web-driven age. If, like their pre-millennium predecessors, these artists continue to thwart notions of originality and diachronicity, they do so by engaging with the history and future of painting itself, in ways that often seem to plainly (and productively) ignore the virtual revolution.

Ara H. Merjian is Associate Professor of Italian Studies at New York University, USA, where he is an affiliate of the Institute of Fine Arts and Department of Art History.