A History of Artists’ Film and Video in Britain 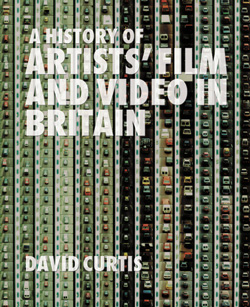 I have a confession. I grew up in a small town with minimal access to information about the world of avant-garde film. A close friend was a librarian at the local art college, and I selfishly asked her to withdraw a book from the catalogue so I could have it all to myself. I didn’t feel too bad because it had only been taken out once in ten years. Experimental Cinema: a fifty-year evolution (1971), by David Curtis, was vitally important, having been published at the time when serious interest in avant-garde cinema first peaked. So little detail about its development was available then, and for years Curtis’ book was one of only a handful of surveys. Decades later, what’s now called ‘artists’ moving image’ has been theorized and academicized. Plural histories have developed but there is still much to be discovered. Writing on the subject often buckles under the pressure of impenetrable theory, which thankfully is not the case in Curtis’ new book. With its diplomatic indefinite article, A History of Artists’ Film and Video in Britain avoids rigorous analysis of the work in favour of a comprehensive overview; both an introduction to the field and a necessary source of reference.

As director of the British Artists’ Film & Video Study Collection, the author was always well placed to write what will inevitably become the primary text. He began as a film programmer at the Arts Lab in 1967 and was Film Officer at the Arts Council from 1977–2000, a period in which many significant works and projects received essential support. However, it’s the earlier period, from the 1920s through to the 1950s, about which Curtis writes with the most enthusiasm. The author seems more at home discussing the Film Society and John Grierson’s documentary realism than defining the London Film-Makers’ Co-operative’s materialist tendencies or feminist film practice.
The first section, which considers the structures within which artists have produced and exhibited, makes a case for just how much work was tied to funding and surely reflects the author’s uniquely informed viewpoint. It’s possibly not too wide of the mark, but the narrative is a conventional one, and, as with the discussion of the films which forms the second part of the book, the devil is in the detail. A few more voices giving a sense of the lived experience would have added precious character, since a reliance on archival documentation leaves the overall tone rather dry.

The book’s main strength – the ambitious scope – is also its drawback. Writing on the films is unfortunately reduced to one-line descriptions or lists, probably the result of not wishing to appear too selective. Here, the works are classified in categories that are, by turns, long established (landscape, the body) or somewhat arbitrary (sculptor’s films, Peter Gidal’s legacy).
Still, it’s an impressive achievement, and in contrast to most texts on what is, lest we forget, a visual medium, it is heavily illustrated. Many new stills have been digitally created to complement the tantalizing selection of historical documents. For me the measure of a good book on cinema is how much it makes you want to see the films, and in this it succeeds. A quick glance through the pages demonstrates how little of this work is screened today. I hope the author’s forthcoming season at the National Film Theatre (in June) will temporarily satisfy this need until our institutions recognize the importance of film as an art form and commit to consistent programming of works such as those covered here.

Mark Webber is an independent curator of artists’ film and video. His retrospective of Valie Export screens at the NFT London in October. He is currently preparing a retrospective of Owen Land (formerly known as George Landow) which will travel to the Whitney Museum, Tate Modern and other venues in early 2005.