Ahead of the 5th edition of his cult annual event – the first outside of New York – Stewart Uoo talks positivity, performance and parties

This Friday, London’s Institute of Contemporary Arts will play host to the fifth edition of Stewart Uoo’s radical annual event It’s Get Better. Taking place for the first time outside of New York City, the night was first initiated at Artists Space in 2013, when then director Stefan Kalmár (now director of the ICA) gave Uoo the opportunity to experiment with the format. Extending across the entire building, and running from 9pm to 5am, the event starts with live performances, followed by a series of screenings, culminating with a party. 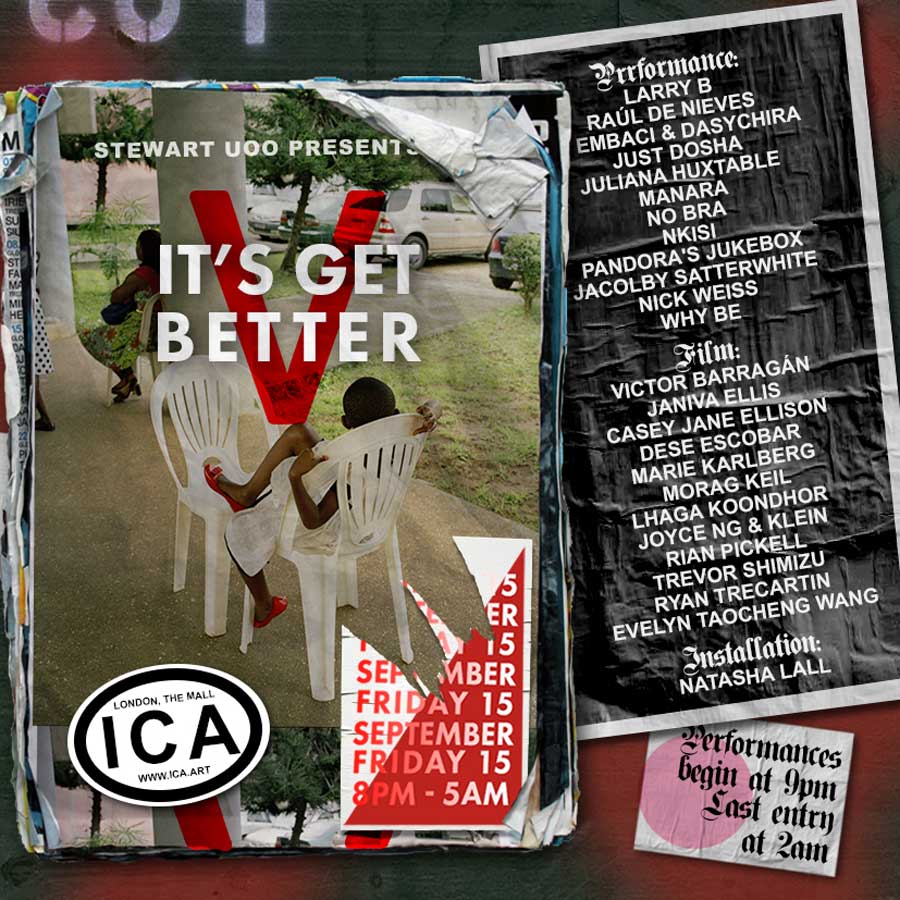 The lineup mixes London and New York-based activist performers, artists, and collectives. There will be performances from artists and musicians such as Larry B, Juliana Huxtable (whose solo show just opened at Project Native Informant), No Bra, Jacolby Satterwhite and Teengirl Fantasy’s Nick Weiss. Other artists such as Casey Jane Ellison, DeSe Escobar, Joyce NG & Klein, and Ryan Trecartin have been commissioned to create short films that focus on certain aspects of their current lifestyle. These will be screened in tandem with a series of sex-positive adult films curated by artist Janiva Ellis and fashion designer Victor Barragán.

Uoo’s own art practice, which spans sculpture, video and collage, engages with the mutation of human identities under the influence of digital culture, and It’s Get Better can be traced back to when the artist first moved to New York in 2012, and began collaborating on a series of underground parties called XTAPUSSY with Marie Karlberg and Hayley Pisaturo. These events merged the art-viewing experience with nightlife and club culture, bringing together, in his words: ‘a lot of amazing people from different communities across social media and other networks to do something in real life.’ The notion of bringing people together – the fusing of the digital space with real life – is intrinsic to the foundations of It’s Get Better, which is ‘organized around perspectives from persons of colour, and invested specifically in queer, feminist, and radical modes of expression.’ There is also a strong emphasis on community. Queer nightlife and club culture provide fertile, liminal environments for counter-cultural resistance. Dancing, too, has long offered another means of freedom of expression and experimentation regarding gender and sexual identity.

Philomena Epps  This is the fifth edition of It’s Get Better, which debuted at Artists Space in 2013, and has since been hosted at MoMA PS1. However, this is the first time the event has been held outside of New York. The formula has been consistent: a performance, screening and reading series, but how and has each edition grown over the last five years? What are your highlights?

Stewart Uoo  Each edition changes depending on the participants. The event has become more ambitious, as we are being invited to larger venues with larger audiences, but it always maintains an experimental and intimate atmosphere. We never know what to expect, since everyone is given an opportunity to do whatever they want. All the moments have been major, but some of the more emotional moments that I can remember are as follows. Ian Isiah sang a cover of R Kelly’s ‘The Worlds Greatest’ dedicated to Treyvon Martin in the wake of his death; Contessa Stuto raged so hard against the institution at PS1 that she had to be escorted away by security; Shelley Hirsch, who performed magnificently to an audience unfamiliar with her work, was met with a standing ovation and left the audiences dumbfounded; Juliana Huxtable read some of her texts in public for the first time; and editing and screening a selection of videos submitted by artists’ mothers for It's Get Better IV, which was dedicated to Brenda Marquez McCool, who lost her life while dancing with her son at the Pulse nightclub shooting in Orlando.

PE  The event brings together a community of ‘friends, collaborators and heroines.’ Why are you excited to bring this specific group together?

SU  I think seeing how individual each participant is – where they are coming from, their subjectivity, and method of performance – will express the opposite of being defined by a specific community and group. I guess that may be the defining feature of bringing this group together.

PE  Running from 9pm to 5am, the night spans eight hours, from sunset to sunrise. How do you interpret the relationship between queer nightlife, activism and art?

PE  What makes for a good party?

SU  I like chaotic nights where nothing is planned but it ends up feeling romantic and cinematic.

PE  The club has historically offered a space of refuge and escapism for marginalized communities, operating as a space in which to reclaim multiple subjectivities. In London and New York, we are seeing alternative spaces for nightlife – specifically LGBTQ venues – being closed at a rapid rate. How can this be countered?

SU  Make your own lane. I think people on the margins always find ways to overcome being policed out of spaces and continue to find new ways of gathering. Some examples of queer parties and spaces in NYC that continue to pave their own way and are less established are Ragga NYC, Papi Juice, Shock Value, GLAM, The Spectrum, sex parties that should remain unnamed, and many more I'm sure I don't know of.

PE  What are potential benefits of placing events like It’s Get Better within the context of the gallery or the museum space? How do these events seek to rupture the art world’s pale, male, stale hegemony?

PE  Can I ask about the title?

SU  It’s Get Better was named after the widely-circulated tattoo fail. A failure of declaring a specific branded pride and optimism. An alternative to singular discussion.

It's Get Better takes place at the ICA, London, this Friday 15 September, 8pm – 5am. Performances begin at 9pm and run through the night, last entry 2am.

Philomena Epps is an editor and writer based in London.