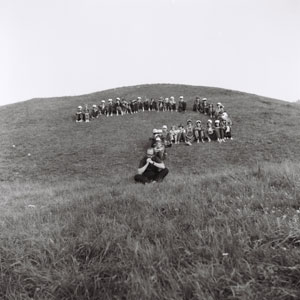 Although it is now almost two months since I received the sad news that Július Koller had died from a heart attack, I am still struggling to accept it. Koller was one of those people who, like a much-loved parent, you unconsciously expect always to be around, because they foster a feeling you thrive on: they inspire confidence in the possibility of living as you want to live and doing what you want to do simply by virtue of the way they are and how they go about their lives. In this sense the philosophical humour, provocative critical wit and, fundamentally, the unruly optimism that Koller articulated in his Conceptual art practice and embodied as a person were a source of inspiration that I now can’t do without; they constituted an irrefutable argument for making art and pursuing criticism, and for the joy that can be gained from doing so, no matter how marginal such activities may appear to society at large. I believe that Koller will have inspired similar feelings in many others, and I know for certain how much he meant to Roman Ondák, not only as a friend but also as the progenitor of the existentially engaged Conceptual art that Ondák continues to practice.

The historical context in which Koller, who was born in 1939, developed his work in Bratislava during the late 1960s was marked both by the hopes entertained during the ‘Prague Spring’, when strict communist policies were briefly relaxed, and by the violent quelling of this ‘thaw’ period in August 1968 by the armies of the Warsaw Pact. Against the backdrop of this violence, Koller’s art appears as a gesture of defiant opposition: the erratic poetic wit at play in his work implies an uncompromising insistence on the Utopian potential of free thought and intersubjective communication in the face of authoritarian social order. For over 50 years Koller sustained his practice on the margins of society with minimal means and great resilience. He realized his works in the form of simple diagrams drawn on index cards or developed in conceptual paintings, as well as in the form of symbolic gestures that he performed in both public and private spaces, sometimes just for the camera. Koller called these gestures ‘anti-happenings’, a term that describes them well. At times they consisted of a question mark or a wave line being ‘graffitied’ in whipped cream onto walls in public places (Univerzálny Futurologicky Otáznik, Universal Futurological Question Mark, 1972); at others they took the form of a table tennis match staged in a gallery as a model of direct intersubjective exchange (J.K. Ping-Pong Club, 1970), or of the redrawing of lines on a tennis court, designated as a minimal yet fundamental form of agency by the title Time/Space Definition of the Psychophysical Activity of Matter (1968).

While his sense of irony may have come from the heart of Old Europe, Koller had a laid-back cheekiness that felt almost Californian. Wordplay was a central focus of his work, in particular the acronym U.F.O., which he adapted in his diagrammatic drawings to stand variously for Univerzálna Futurologická Organizácia (Universal Futurological Organization, 1972–3), Univerzálny Filozoficky Ornament (Universal Philosophical Ornament, 1978) or Underground Fantastic Organization (1975), and which also appeared in a series of slapsticky self-portraits titled ‘U.F.O.–naut’ (1970–2007). These infinite variations on a common cipher constituted a insistent incantation of the Utopian principle. Friedrich Nietzsche argued that to realize a fundamental critique of ‘bad faith’ means to move beyond cynicism and embrace a radical optimism that exceeds the petty dialectics of expectation and disappointment. In his approach to life and art as the U.F.O.–naut, Koller embodied precisely this: he actualized the potential of his imagination as a form of existential agency. As we get entangled in the strange possibilities of art and ideas, we all become U.F.O.–nauts and are deeply indebted to Koller, our patron saint of U.F.O.–nauts. To practise the defiant exuberance of his optimism then, seems a sincere way to mourn his death and celebrate the philosophy of his art and life.