BY Carina Bukuts in EU Reviews , Exhibition Reviews | 25 MAY 21

José Montealegre Blurs the Lines Between Reality and Fiction

C
BY Carina Bukuts in EU Reviews , Exhibition Reviews | 25 MAY 21

In ‘Nuevo Mundo’ (New World) – Honduras-born, Florence-based artist José Montealegre’s current solo show at Mountains – the line between reality and fiction is so blurred that every detail merits questioning. Yet, as with all the best storytellers, Montealegre knows precisely how to lure us into his world.

The first part of ‘Nuevo Mundo’ comprises an installation of seven small sculptures in the gallery window, which passers-by might easily mistake for seedlings, herbs and houseplants placed there to catch the sunlight. It takes some time before you notice that these plants will neither grow nor wither because they are made of copper. Set in plastic and terracotta pots and embedded in soil, these fragile sculptures might pass for real were it not for Página 0138 (Page 0138, all works 2021), which stands in a water-filled glass vase. Here, the red-brown hue of the water and copper deposits at the bottom of the vessel reveal the true material of the plants. Looking at the small and fragile roots, it’s even possible to detect traces of verdigris, the natural green patina formed when copper is exposed to water over time.

Inside the gallery, more copper plants are dotted about the space, their leaves coated in light-green paint (Página 0214) or adorned with handmade flowers (Página 0426). Empty pots and a bag of soil lie in one corner, as if the gardener’s work here is not yet done. I suspect that even a botanical expert would struggle to identify the many different specimens assembled in the gallery; thankfully, the titles of the works offer some guidance. They refer to page numbers from the 16th-century manuscripts of Spanish naturalist Francisco Hernández de Toledo, which contain illustrations and descriptions of more than 3,000 Mexican plants that he came across while travelling through Central Mexico to study its botany when the country was under Spanish rule. Compiled in the 1570s, Hernández’s studies were published posthumously in 1615 as Quatro libros de la Naturaleza (Four Books on Nature). Modelled after the illustrations Hernández commissioned from local artists, Montealegre’s sculptures speak to the transfer of indigenous knowledge during colonialism as well as the complex relationship between original and translation.

The question of authenticity is also at play in a series of wall works. The Sundial: First Story is the one of three coloured-glass frames containing a torn-out book page. In this extract of the story, the narrator spends a day in Florence, bikes up a hill, tries to visit a museum (which turns out to be closed) and discovers the titular sundial. Further excerpts in The Sundial: Story Six and The Sundial: Story Thirteen give the impression that the book from which the pages are supposedly taken truly exists, but here – once again – Montealegre tricks the viewer. The paper’s torn edges, traditionally typeset serif font and yellowing hue are not the effects of time but the work of the artist, who also devised The Sundial’s storyline.

Presenting a series of works that prove we should not trust everything we see and read, Montealegre compels us to confront how vulnerable we are to narrative manipulation. This is further underscored by the show’s title, ‘Nuevo Mundo’ – the term coined in the 16th century by European colonizers who claimed to have ‘discovered’ the Americas – which stands as testament to the fact that novelty is always a matter of perspective and history has multiple truths.

José Montealegre, ‘Nuevo Mundo’, was on view at Mountains, Berlin, through 24 April 2021. 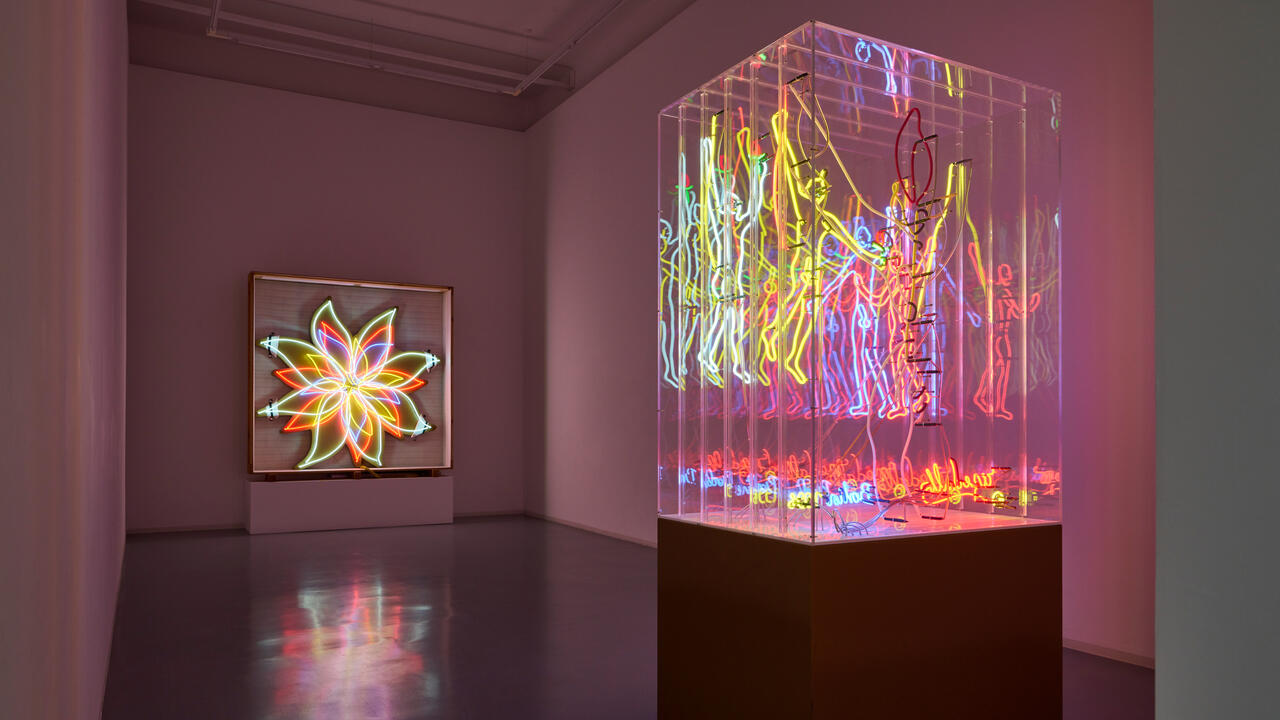