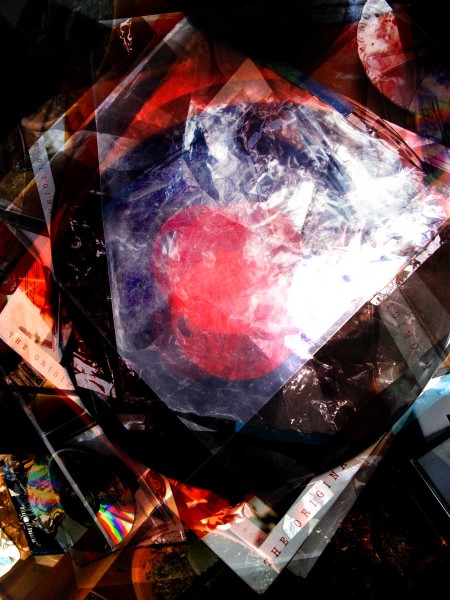 Kristan Horton is driven by an insatiable need to speculate on how photography affects knowledge. Everyday objects continually serve as vehicles for his investigations. For each work in his ‘Orbit’ series of photographs (2009), shown recently in Toronto, Horton wielded a digital camera in the studio as though it were an apparatus in the laboratory, orbiting a pile of paraphernalia while snapping shots at regular intervals. He then digitally superimposed this series of images on top of each other in the same order in which they were taken to create a dynamic, multilayered composite of perspectives within a single frame.

Horton’s adherence to a set of procedural rules is indebted to Conceptual art’s studies of the perceptual and technical limitations of recording technologies. (One thinks of the self-reflexive photographic projects of John Hilliard such as Camera Recording Its Own Condition (7 Apertures, 10 Speeds, 2 Mirrors), 1971.) In addition, however, Horton is stylistically in dialogue with the Modernist past; Orbit (Zen), for instance, features a pair of diagonal wedges, dramatically extending from left and right. Hanging off these pointing forms are strips of green masking tape that serve no apparent adhesive purpose; these diagonals float freely within a compositional soup consisting of column-like stacks of staples, printed packaging for batteries, a Nintendo console, extension cables, pieces of clear plastic and a paperback entitled The Three Pillars of Zen (1965) – a philosophy that is certainly reflected in Horton’s ritualized tendency to follow rules. While formally reminiscent of canonical Futurist and Dada works that densely combine geometric structures, lowly detritus and found texts – such as those of Carlo Carrà or Kurt Schwitters ­– Horton’s practice is also inspired by analytical Cubism’s melding of multiple viewpoints. However, it is Horton’s insertion of sheets of malleable plastic into the compositional mix that allows for an assertively contemporary and serious investigation of perceptual phenomena associated with image transparency, opacity, reflection and degradation – and with the descriptive limits of digital technology.

And yet, several works suggested a not-so-serious critique of Modernist notions of artistic originality. The title of Orbit (The Original), for example, provides an ironic sentiment, further expressed by the inclusion of critical superlatives (‘Hilarious! Superb!’), along with a ZZ Top CD. But the CD emanates a decidedly non-kitschy luminous spectral glow that is echoed by other circular and ovoid forms in the picture. In addition, a centrally situated black shape – which could derive from a lowly rubbish bag – registers as a cosmic expanse of dark matter punctuated by milky-white passages, and by twisting, amorphous forms that may signify the processes of digital becoming or morphing.

Orbit (Doorknob) contains a yellow label with the phrase ‘please read carefully’. One may obey this direction by dwelling upon a golden orb – actually, just an utterly conventional doorknob – which glows in a manner that may provoke unexpected associations, such as the moment of glare from a flash bulb or some sort of cosmological event – although, in the end, such objects semantically return to earth as lowly hardware-store trinkets. As with much of Horton’s recent work, these intriguing images manage to offer surprising hints of the unexplainable while dutifully testing the representational limits of technology.

Dan Adler is an associate professor of art history at York University, Toronto.