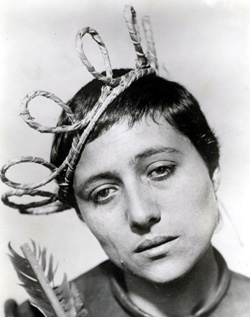 Runa Islam is a British artist and filmmaker who lives in London. She has recently exhibited at the Künstlerhaus Bethanien in Berlin, Germany. Her solo show, ‘Centre of Gravity’, will travel from the Bergen Kunsthall to the Nasjonalmuseet Oslo, Norway, and her work is currently included in exhibitions at Eva Presenhuber, Zurich, Switzerland, Two Rooms, Auckland, New Zealand and the ICA, Boston, USA.

Under instruction: the immense catalogue of 500 or so Screen Tests made by Andy Warhol between 1963 and 1965 was anchored by the simple instruction ‘no action’. Filmed in black and white at 24 frames per second but played back at the rate of 16 frames per second, the footage materializes a silent world of close-up portraits in which the proximity and duration of each subject create some of the most transcendental film imagery ever made. In the impossible attempt to stay entirely still, the subtle flicker of expression and emotion across the faces of his ‘subjects’ stands in for drama.

Almost 40 years earlier, the compelling face of Maria Falconetti filled the camera frame with equally affective presence in Carl Theodor Dreyer’s La Passion de Jeanne d’Arc (The Passion of Joan of Arc, 1928). But Dreyer’s methods were somewhat harsher on his actress: she had to personify a saint, not a chic Warholite. In the attempt to extract the most authentic portrayal possible from his actress, Dreyer made Falconetti kneel on stones for hours and laboriously repeat lines and actions over and over. (Dreyer had been influenced by the radical approach to acting of the newly founded methods of the Stanislawski school.) Dreyer abandoned the script written for the film and ended up using the original transcripts of the actual trial of Joan of Arc. Most impressive are the extreme camera angles, which boldly tilt up to Falconetti’s face in a pose reminiscent of classical religious paintings. Now, 40 years on from Warhol’s screen tests, his subjects possess a similarly iconic status.

When making his first feature, Tres tristes tigres (Very Sad Tigers, 1969), Raúl Ruiz instructed his actors to try to find the camera while he tried to avoid them. Hand-held and shot in black and white, Ruiz’ method of hide-and-seek filming takes a vertiginous and almost plotless tumble through the confines of bars and apartments of the Santiago underworld, glimpsing the lives of three restless middle-aged characters along the way, who, in one drunken scene, try to recite the tongue-twister ‘the three trapped tigers tumbled through the trees’. Ruiz liked to cover his actors in Vaseline to make them feel, and look, sweaty, a technique similar to that used by Luis Buñuel during the shoot of El Ángel exterminador (Exterminating Angel, 1962) – the Spanish director smeared honey on the hands of his actors in order to make them feel dirty and uncomfortable.

During the filming of 2 ou 3 choses que je sais d’elle (Two or Three Things I Know about Her, 1967) Jean-Luc Godard fed his actors questions and lines through a concealed ear-piece and recorded their improvised responses. Their distracted and often contradictory replies and their casual address to camera are among the several approaches to filmmaking that Godard employed, along with disruptive sounds that fragmented the narrative in unprecedented ways.

The story at the heart of Michelangelo Antonioni’s film L’Avventura (The Adventure, 1960) drifts like a boat lost at sea. Antonioni resisted the narrative causalities and closure of classical drama. Anna, played by Lea Massari, disappears on an island and is never found. Her friend Claudia, played by the then almost unknown Monica Vitti, looks for Anna, becomes attracted to her boyfriend and cements her stardom. Vitti went on to star in La Notte (The Night, 1961) and L’Eclisse (The Eclipse, 1962), also black and white visions of bourgeois ennui, longing and disassociation in postwar Italy. In a highly stylised approach to filming, Antonioni’s vision culminated in the subtly toned colour film Il Deserto rosso (The Red Desert, 1964). The director always instructed his cameraman to continue to film for one minute after the action had stopped, as he believed this was when the most authentic performance of the actors would emerge – a performance he could never direct into being.

Setting the stage; other worlds and times: within the spaceship in Andrei Tarkovsky’s Solaris (1972), the cosmonauts become subject to the powers of a mystical sea. Kris Kelvin (Donatas Banionis) conjures up an incarnation of his dead wife, Hari, who has no memory, is unable to exist without her husband, can heal even severe injuries, and struggles to reconcile her emotional core with her non-state. Tarkovsky’s films are so long that falling asleep during them and then waking up in the depths of the story only enhances the effect they have on you. They are time bombs, films that explode in your psyche long after the event.

The artificial world of Jacques Tati’s Play Time (1967), meticulously explores stylizations, cadences and repetitions that are as much form as content. Against the droning sounds of modern machinery, the often comic and absurd rhythms of people and objects have the potential to take centre-stage. In the far-fetched, post-Holocaust world of Marco Ferreri’s Ciao maschio (Bye Bye Monkey, 1978), New York is the backdrop for a group of misfits. A fallen ‘King Kong’ and a small chimpanzee are discovered on the sands of Battery Park by a manic depressive character played by an ageing Marcello Mastroianni. A feminist amateur dramatic group rapes Lafayette, a character played by a young Gérard Depardieu, in order to get in touch with method acting. The chimpanzee is adopted as a child, whilst a real pregnancy goes unwanted. Meanwhile, in the wax museum where Lafayette works, the misanthropic owner is caught rearranging the pubic hair on a statue of Cleopatra. As ever, Ferreri portrays, with black humour, the dysfunctional malaise of being.

The classic apartments of London, New York and Paris become the sites of psychologically charged paranoia for the protagonists in Roman Polanski’s films Repulsion (1965), Rosemary’s Baby (1968) and Le Locataire (The Tenant, 1976). In the perverse stage that is the drawing-room drama of Alfred Hitchcock’s Rope (1948), scene takes are ten minutes long and seamlessly cut together. The film has echoes in the sociopathic space of the apartment in Michael Haneke’s Benny’s Video (1992), where the camera is both witness and protagonist.

Trickery, kaleidoscopes, Russian dolls and Möbius strips: the editing and tempo, montage and narrative arch of Nicolas Roeg’s film Bad Timing (1980) spin around an axis that has no centre of gravity. The story spirals, flashbacks and mosaics its way into a heady mixture of intimacy and sociopathy – the darkness of the characters played by Theresa Russell and Art Garfunkel, is what lights the film. The ground shifts under the film, just as it did in Roeg’s first work, Performance (1970), co-directed with Donald Cammell.

In Le charme discret de la bourgeoisie (The Discreet Charm of the Bourgeoisie, 1972), Luis Buñuel provides an unrelenting onslaught of interruptions that prevent a group of six bourgeois Parisians from sitting down to dinner. From each interruption, another springs forth, until sex, dreams, drug smuggling and finally death succeed to defer the event. Within the disjointed progression of an otherwise straightforward plot, the only constant is a reccurring sequence of the guests walking endlessly along a country road in their dinner-party attire. According to legend, this scene was inspired by a conversation with Marilyn Monroe. The director had commented, ‘the bourgeois are always talking’; apparently Monroe, having mishead him, replied, ‘yes, the bourgeoisie are always walking’.

In Dennis Hopper’s incredible, underrated The Last Movie (1971), misunderstandings lie at the heart of what forms a highly convoluted three tier meta-fiction. After the departure of the crew and cast of a Sam Fuller film, the Indians of a small Peruvian village are left with the elaborate sets in which they ritualistically re-stage the ‘shoot outs’ they have witnessed as extras and bystanders. Using make-believe equipment – camera and lighting woven out of wicker – the Indians mimic the roles of the director and cast, but ironically, not attuned to Hollywood’s representational methods of ‘faking it’, their flights and shoot outs are for real.

Magic, trickery and deceit conspire in the undisguised reflexiveness of Orson Welles’ Vérités et mensonges (F for Fake, 1974). The structure of this free-form documentary plays out to the fullest the familiar Welles motif of the hall of mirrors. The premise that film is only an image is never laid to rest, and the duplicitous line between truth and illusion, art and lies is roguishly trodden by Welles, who proclaimed to be the biggest charlatan of them all.

The entwined nature of documentary and fiction come together in Abbas Kiarostami’s Close Up (1990). An intriguing portrait of a would-be criminal emerges as the director follows the real-life trial of a man accused of impersonating Mohsen Makhmalbaf, (another famous Iranian filmmaker). The impostor does indeed have an uncanny resemblance to Makhmalbaf, but he is also a knowledgeable cinéaste and keen admirer of both Makhmalbaf and Kiarostami. Bringing together interviews, confessions and re-enactments, the making of the film influenced the court case and charges were dropped as a direct result. In the memorable scene near the film’s end, the ‘impostor’ is introduced to his would-be doppelgänger, Makhmalbaf, and the two ride away on a motorbike, one holding a bunch of pink carnations.

Two thirds of the way through David Lynch’s Mulholland Drive (2001), the story slides along a Möbius strip into a starkly different second part, making the viewer feel like they have been awoken from a immersive lucid dream. In the pivotal scene, Lynch deftly exposes the powers of cinematic illusion. A beautiful female singer keeps the audience spellbound with a haunting a capella performance of Roy Orbison’s song ‘Crying’. Just as the emotions peak, the singer suddenly collapses, the song continues without her and for a moment we are snapped out of the hypnosis of cinema.