Maggie Nelson's meditation on a set of oxymorons: the pregnant woman who thinks, the mother who writes and the queer who procreates 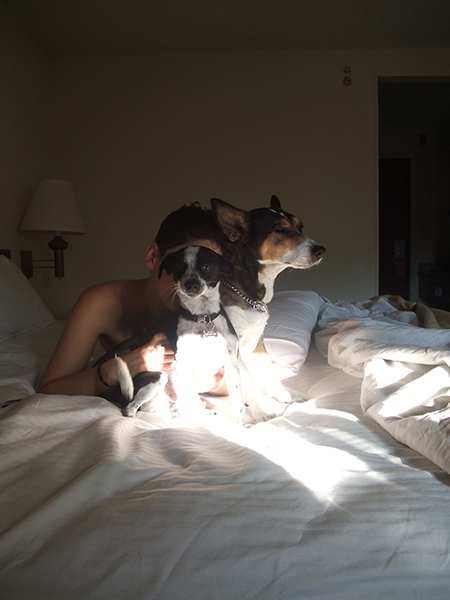 At a speaking engagement for her previous book, The Art of Cruelty (2011), a well-known playwright asks Nelson how, ‘in her condition’, she was able to deal with the book’s dark content. Returning to work after the birth of her son, a colleague reassures her that, eventually, she will get back to writing. And a friend reacts to a personalized mug in her cupboard featuring a pregnant Nelson with her stepson and her partner, artist Harry Dodge (who identifies as neither male nor female), dressed up to see the Nutcracker: ‘I’ve never seen anything so heteronormative in all my life.’ These are not only snapshots of Nelson’s life: they are negatives of a cultural binary that places mothering on the side of normativity, cordoning it off from the rigors of intellectualism, even in supposedly radical feminist and queer circles. Nelson recalls a seminar she once attended featuring feminist theorist Jane Gallop and art historian Rosalind Krauss. To make a point about the objectified status of the mother in Roland Barthes’s Camera Lucida (1980), Gallop discussed photographs of herself naked in the bathtub with her baby son. Krauss’s response to this slideshow, as remembered by Nelson, was that Gallop’s ‘maternity had rotted her mind… contaminating serious academic space with her pudgy body and unresolved, self-involved thinking.’

Nelson is not engaging in feminist reversals. She is not speculating on the double standards and microaggressions that many women face when they open up about their reproductive lives. There are certainly plenty of men who have been applauded for their forays into the deep, dark domestic. (Nelson mentions philosopher Peter Sloterdijk’s theory of the uterus as a ‘bubble’ that cradles the fetus before individualization in the world— ‘negative gynecology’ – but the immersive, autobiographical writing of Karl Ove Knausgaard also comes to mind). And there are many female writers and artists – Moyra Davey, Elena Ferrante, Mary Kelly and Mierle Laderman – whose work defies, and is celebrated for defying, the ban on maternity. (Though Kelly initially scandalized the public by bringing stained diaper liners into the ICA, London, in 1976 for her installation Post-Partum Document, and Davey’s 2001 anthology The Mother Reader, published with a social justice press, is seldom discussed in interviews about her photography or mentioned in her biography). The real genre-defying aspect of The Argonauts is its effort to engage questions about what it means to be immersed in the material conditions of one’s life and to subject that life to the operating table of language. In other words, it is a book about the performance of memoir. Or, as Nelson puts it in another context, she is ‘in drag’ as a memoirist. The book is structured as an assemblage of anecdotes from Nelson’s life and references culled from her library. These notes sometimes amount to only a line or a small paragraph, but it is from within this compressed form that Nelson seeks to expand the aesthetic and cultural terminology–- especially the supposedly radical terminology— that categorizes the experience of all bodies and households. She asks questions about writing autobiography that most writers take for granted. How can she write about pregnancy, marriage, child and stepchild rearing without sneers of hetero- or homonormativity? How can she open up about life with her partner without betraying their love and intimacy? How can she even speak about her partner without assigning them a gender? (‘How to explain,’ she asks, ‘in a culture frantic for resolution, that sometimes the shit stays messy?’) And what does it mean to write a book while latched to a breast-pumping machine? ‘Here’s the catch,’ says Nelson, ‘I cannot hold my baby at the same time as I write.’

A.L. Steiner’s installation Puppies and Babies, for which Nelson wrote an accompanying essay and mentions several times in The Argonauts, is in many ways the art world equivalent to Nelson’s memoir. In 2012, Steiner arranged a collage of private snapshots she had always thought of as ‘personal’, ‘cheesy’ and ‘unartistic’ – hence not part of her professional oeuvre – on the walls of 3001 Gallery in Los Angeles. Dogs and babies, the most reprehensible and lowbrow of photographic subjects, are seen nursing, walking, spooning and suckling with their caregivers. Arranged in a way that a pre-Instagram teenager might tack up photos of friends and family on the inside of a school locker, but with far more sexualized nudity (the work includes pregnant women in provocative poses, as well as children and parents naked together), Steiner’s collection undoes the distinction between the deviant, non-reproductive sexuality of, say, Robert Mapplethorpe or Nan Goldin’s photographs, and the joyful messiness of everyday caretaking. Steiner’s show, says Nelson, ‘reminds us…that nothing we do in this life need have a lid crammed on it, that no set of practices or relations has the monopoly on the so-called radical, or the so-called normative.’ At its core, The Argonauts wages a much-needed attack on what passes for radical thought and art in our times. But her book is more poetic than polemic. Nelson swerves away from academic language even as she pays homage to her favorite philosophers and teachers (‘I am not interested in a hermeneutics, or an erotics, or a metaphorics, of my anus. I am interested in ass-fucking’), and she has little patience for the grandiloquent, masculinist thinking of Žižek, Baudrillard and Badiou (‘let us leave them to their love, their event proper’). She is especially irked by the anti-natalism of queer theorists such as Lee Edelman, whose book No Future (2004) espouses queerness as a rejection of what he calls ‘reproductive futurity’, a ‘fuck you’ to the metaphorical Child in whose name the future is propagated. Edelman encourages queers to reject the conservative and homophobic illusion that ‘children are the future’, turn away from a society modeled on the family, and embrace the disruptive negativity of sexuality for its own sake. Nelson rightly questions the anti-social, even narcissistic, dimension of this thesis: ‘basking in the punk allure of ‘no future’ won’t suffice, either, as if all that is left for us to do is sit back and watch while the gratuitously wealthy and greedy shed our economy and our climate and our planet.’

What good (or bad), ultimately, does avoidance of reproduction do? We, of course, have more than enough reason to question the sustainability of the future, but to emphasize singleness and deviant sexuality as glamorously radical at the expense of fragility, dependence, care, disability – all of which are part of the experience of pregnancy and motherhood – is to banish the lives of many women from discussions of politics, progressive or otherwise. I remember once applauding John Waters when he said, during a performance in Ithaca, New York, that ‘being gay was not enough’ for radical action; and then feeling quietly ushered out of the building when he went on to declare heterosexual people without children as more ‘his people’ than lesbians with baby strollers. (And I once fretfully gave a talk for a job interview in front of Edelman with a tightly bandaged pregnant belly; the fear of being with child before the ‘fuck the Child’ theorist seems to throw the wrong kind of wrench at my future). It is tempting, and in bad taste, to think of The Argonauts as some kind of alternative take on Helen Gurley Brown’s Having It All (1982). In the end, Nelson is not promoting an extension of duties for the mother, a right to be both art and body, or a right to be represented in the first place. There is no agenda here. There is no having it all. Instead of a binary between the mind and motherhood, sex and reproduction, the former is folded into a new state – one that Nelson calls exhaustion, in a positive sense. Exhaustion is a transitive state, a state of rest and repose between fighting and fucking, or failing to fuck and fight. It defines the shift from the insatiability of sexual desire to post-partum collapse. It is not the moment of giving up, though. Exhaustion, as Nelson figures it, involves acknowledging a dependence on the care of others. It is from an exhausted state, then, (The Argonauts was written in the year after the birth of her child) that Nelson invites her reader to encounter the fragility of her body, the body of her lover, and the body of her child, all the while redefining, or rather un-defining, what a memoir can be: ‘from my station of fatigue,’ says Nelson, ‘exchanging horniness for exhaustion grows in allure. Unable to fight my station, at least for the time being, I try to learn from it; another self, stripped.’ The Argonauts by Maggie Nelson is published by Graywolf Press

Profiles
Collector Victoria Rogers on How Art Can Change Society

Profiles
Larry Ossei-Mensah Is Not Wasting His Time