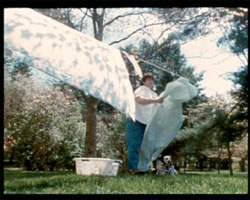 Margaret Salmon has described her films, shot on scarred and eyelash-licked 16mm and trembling Super 8, as ‘time-based portraits’. It’s a technical-sounding term, but one that also yields up a surprising poetry. Time, here, refers not only to the click-clack spooling of celluloid reels but also to the types of temporality experienced by the people in her films. Their time is lost time, or wasted time, or else, at best, down time (and their down times are always smudged with sadness; they’re always a little down). In Salmon’s work what we’d usually identify as the significant moments in life happen not so much off-camera as off-planet. Hers is an everyday world in which every day is the same, and in which our tears bore us to everyday tears.
Ramapo Central (2003) opens with a shot of a suburban house – the kind you find in kids’ drawings, with eye-like windows and a maw-like door. In a series of cuts, from colour to black and white and back again, the house’s inhabitant, a fat woman, lives out her lonely life. We see her gardening and gathering washing from the line, see her performing pull-ups and playing with her overweight Dalmatian (it’s true, dogs do begin to resemble their owners as the years wear on). Most of all, though, we see her working behind a desk, where she handles calls from job-seeking special needs teachers. The woman’s role is to sherpa them through an officious application process, and she does this with warmth and willingness, pointing to short cuts, spelling out difficult words (‘B as in boy …’) and giving the public body she’s working for, if not a face, then at least a gentle, good-humoured voice. But while the woman’s callers can rely on the kindness of a stranger, there seems to be nobody in the film for the woman herself to rely on. Away from her desk she is always pictured alone, and always with a melancholy expression. Maybe, though, this is what all of us look like when we’re not caught up in a social moment, when we are not acting. Maybe melancholy is our default emotion, one that, like the woman’s cheerful telephone manner (‘Ramapo Central, how may I help you?’), was long ago made policy by some ineffable bureaucrat-in-chief.
Higher powers also inform Salmon’s film Peggy (2003), in which an old woman gives thanks to God. Pressing her face to the camera, the downy fuzz on her chin forming an inverted halo, she sings ‘Amazing Grace’ in a voice that’s become splintered by the passage of time. As the line ‘I once was blind but now can see’ escapes her lips, she covers her eyes, and although her singing continues to soundtrack the piece, the camera cuts to various domestic vignettes: Peggy opening the garage door, Peggy gazing out of the window, Peggy effortfully wringing clothes dry over the kitchen sink. Filmed in faded black and white, these scenes feel like they’ve taken place a thousand times before, and have become worn and wan through repetition. What kind of fate divine grace has saved Peggy from is uncertain, and it’s even more uncertain whether her shadow life is any kind of salvation at all. The God she thanks seems to be a god of small miracles, one that can ensure survival, yes, but not necessarily something worth surviving for.
Shown as part of last year’s ‘New Contemporaries’ touring exhibition, PS (2004) is by some distance Salmon’s most emotionally affecting film, and the one in which her focus on time as the parent of failure and upset feels (and cuts) the sharpest. Here – over footage of a lanky man mowing the lawn, yanking up weeds and taking angry pulls on a cigarette – a married couple engage in an argument. Claustrophobic, circular and tense with drink and barely checked violence, it’s the kind of row we all hope we’ll never have, one in which it feels as though love has not only died, but that it arrived in our lives stillborn. Every now and then Salmon relieves this hell with a glimpse of something heavenly. Fireworks flash, or a hosepipe sprays an aqueous flower onto a window pane, but in the end these moments of fleeting beauty aren’t enough to overcome the horror of a passion that’s curdled into contempt. If PS is a portrait, it is one not only of its protagonists but of anybody and everybody who lives by the ticking of the clock. Salmon understands that it is time that makes us, and unmakes us, and that it is the dimension that portraiture truly calls home.