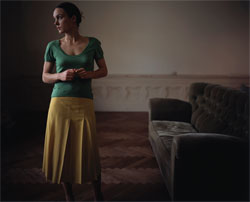 While Sweden’s Ministry of Culture has declared 2006 the Year of Multiculturalism, the Moderna Museet opened ‘The Moderna Exhibition 2006’, an exclusively national salon featuring 49 Swedish artists. This may seem counterintuitive: the museum’s first survey of contemporary Swedish art is a departure from its tradition of internationalism. Two weeks later the curators of the Whitney Biennial in New York declared that the institution’s 75-year mission to circumscribe an American aesthetic had lost much of its relevance and that ‘geographical boundaries had become irrelevant’, listing eleven artists in the exhibition as ‘international’. The two museums appeared to be ships passing in the night.

While the Whitney re-rigs to accommodate the priorities of globalization, is the Moderna expressing scepticism at the efficacy of contemporary international biennials and triennials? The museum has never hosted one. What kind of future does the Moderna imagine for national cultures at a time when Kofi Annan warns that ‘arguing against globalization is like arguing against the laws of gravity’? Adam Weinberg, the Whitney’s beguiling Director, offered partial answers, remembering that in the 1970s American artists ‘began to see themselves as a part of a larger international situation. But there was a noticeable shift, when people stopped painting the American scene.’ In a paradoxical twist ‘The Moderna Exhibition’ suggests that the most relevant Swedish artists – to paraphrase Weinberg – continue to epitomize the Swedish scene. Among the numerous examples in the exhibition here are Dorinel Marc, Miriam Bäckström and Felix Gmelin.

Sweden’s Year of Multiculturalism – designed to boost the integration of ethnic minorities into Swedish life – is as much an expression of altruism as of pragmatism in a country hoping to stem the tide of ethnic apartheid rising throughout Europe. As his contribution to the spirit of multiculturalism Dorinel Marc, a Romanian immigrant, has given over his place in the show to Markus Anderson. Anderson, a shadowy Swedish artist, paints voluptuously naked women lounging on animal pelts, and thunderstorms at sea – when he is not immortalizing northern European right-wing supermen in his gauche and inelegant attempt at Realism. His subjects include Pim Fortuyn, Theo van Gogh and lesser-knowns including Mijailo Mijailovic (the assassin of Sweden’s popular Foreign Minister Anna Lindh) and Daniel Wretström, a ‘victim of the multicult’, as one neo-Nazi website mourns. Wretström, murdered by a Swedish immigrant, is a patriot in Anderson’s eyes, while Mijailovic is a sacrificial lamb. On the coat-tails of Anderson’s extremism Dorinel Marc manipulates cultural relativism, pulling hard at the thread that would unravel free speech in this open society while deftly touching nearly every sensitive nerve in Sweden’s laudable if uphill endeavour at ethnic assimilation.

Miriam Bäckström’s stunning film The Viewer (2005) is a discerning psychological drama expressed in the artist’s usual sparse and debonair style. Employing the remarkable talents of actors Tomas Ponten and Rebecka Hemse, Backström exploits the unpretentious interview form to excavate emotive vulnerabilities from these two people. But which two people do we see: Bäckström’s fictitious characters soul-searching or Ponten and Hemse indulging in their own indiscreet confessions? Or both? In conventional art history there is a difference between a picture of a person and a portrait: a portrait is made in the presence of the sitter. Bäckström ingeniously muddles up portraits and pictures, leading her actors along a hall of mirrors that reflects realities and illusions that exist not least in the mind of her audience. Bäckström is one of Sweden’s most talented screenwriters in the tradition of Ingmar Bergman, from whom she has lifted as much as she could and made it her own.

In Sound and Vision (2005) Felix Gmelin digs into his past and into Sweden’s legendary egalitarian liberalism. He unearthed a Swedish sex education film from 1970 in which a class of blind adolescents is guided by a teacher to discover by touch – in this case, discovering the genitals of a young man and woman which they squeeze most disspassionately. The patently idiosyncratic film is positioned in counterpoint to a small monitor presenting the young Gmelin in an eccentric home movie in which his father, Otto Gmelin, a media theorist, subjects him to home-made experiments in synaesthesia. Designed to provoke his son to express feelings through visual associations, his father’s antics only elicit a bemused smile from the young Gmelin. With tongue planted firmly in cheek, the artist captures the whiff of a libertarian mood that makes you wonder if you can teach someone to feel.

As the gravitational pull of globalization becomes increasingly irresistible, ‘The Moderna Exhibition’ raises pointed questions on which the jury is still out. That the Swedish artists seen here are engaging, persuasive and talented is a conclusion one can come to quickly, but taking the long view, the timing of this exhibition may ultimately say more about globalism than about Swedish art.