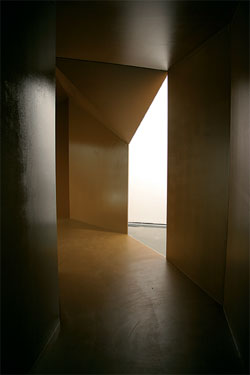 Maybe you know the type, the fellow passenger on your plane who (while they’re a perfect stranger to you) goes on to haunt your every holiday moment. You see them on the beach, or buying peaches at the market. They book the table next to yours in that trattoria you thought only you knew about, where their children cry and slurp their spaghetti. Half-way through your trip the two of you begin to exchange uncomfortable smiles, an acknowledgement of your improbable, chance-dictated bond. For some reason, though, you never speak to them. You will never be friends.
Monika Sosnowska’s Untitled (2004) seemed designed to generate such semi-encounters. A sprawling plywood labyrinth of irregularly shaped, babyshit-coloured chambers and passages, the piece occupied the Serpentine’s galleries like an architectural parasite, one spatial system living inside another. Visitors threaded through in various states of disorientation, pacing with Theseus-like purposefulness or else bumping, for the fourth time in five minutes, into a chubby woman in a neck-brace or a man brandishing a damp umbrella. Gallery wardens sat in the culs-de-sac of Sosnowska’s construction, like guardians of a secret or end-level villains in a Sega-era platform computer game. Weirdly, meeting a particular warden more than once felt a little shaming, as though one wasn’t quite equal to the labyrinth’s (rather basic) challenge.
The success of Untitled turned not, as the Serpentine’s publicity material claimed, on altering perceptions of a particular space (does any gallery visitor invest enough in a venue to give this notion wings?) but on a set of twists in the everyday art viewing experience. Some of these, for example the shift from environment as support for art to environment as art itself, were clearly signposted, others less so.
By recasting viewers in the role of exhibition objects
(in the relentlessly brown labyrinth a punter’s toupee or turn-ups had the visual pull of a minor masterpiece), while at the same time setting them a puzzle that they may compete or co-operate to solve, Sosnowska pushes some very real, but very rarely spoken about, gallery-going behaviour into the spotlight. In theory, of course, our encounters with art are characterized by monkish contemplation and various types of rapture. In practice, they’re caught up with fantasizing about the beautiful boy in the café and our faint smugness at overhearing married men misinterpret paintings to their mistresses. Untitled amplifies this sociological stuff, creating an echo not so much of a gallery’s architecture as of the matrix of actions and reactions that the idea of a gallery provokes.
This, though, is not to forget Untitled’s formal qualities. As you walked through the piece’s polygonal interior, unexpected shifts in scale took place, walls and ceilings expanded and contracted, and sharp angles dissolved in shadow. The Polish Constructivist Katarzyna Kobro was there somewhere in its art historical DNA, as was (surprisingly) the Italian fin-de-siècle sculptor Medardo Rosso. More prosaically, its drab paintwork and endlessly winding passageways recalled the schools, hospitals and prisons of a mid-20th-century socialist state. While work dealing with (especially former Eastern-Bloc) Modernist architecture is looking more and more like a flat-lining currency in contemporary art, Sosnowska’s construction is unspecific enough still to prickle and provoke, despite the overfamiliarity of this trope. Indeed, for all its clean lines, Untitled also had a faintly Gothic sensibility, a whiff of moon-induced madness and ogres-in-the-basement that problematized its institutional atmosphere.
Importantly, it’s impossible to view Sosnowska’s piece from the outside, with all the safe distance and laissez-faire visual consumption that that implies. To do business with Untitled you had to enter the labyrinth, just as you might enter a dream, or a bureaucracy, and allow strange logics to bite on what you thought you knew. Even inside, your experience of the work is fragmentary (a glimpse of the Serpentine’s original ceiling here, a portion of eavesdropped conversation there) and likely to differ markedly from that of other visitors. However, if Untitled is, at base, an exploration of the tension between public and private, between the act of coming together to look at an art work or inhabit a space and what happens when that act gets filtered through different imaginations, it is one that does not set these things up as opposites. Rather, Sosnowska understands that our lives are always public and always private, and that while we are the world’s idea, the world is our idea too.