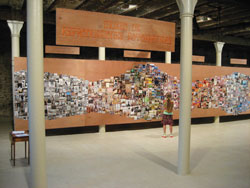 Art reproductions are big business and even a source of pride. In my home town of Chicago, in certain circles of middle-aged suburban women, there is even envy, mixed with admiration, in having Georges Seurat’s A Sunday Afternoon on the Island of La Grande Jatte (1884–6), The Art Institute of Chicago’s most visited and well-known painting, stamped on an umbrella. Undoubtedly it must offer a satisfying mimetic experience, as both ladies, the suburbanite and her elegant counterpart in late 19th-century Paris, hold their parasols haughtily aloft as they parade around their respective urban environments.Because it is so common these days to see famous works of art slapped on all manner of trinkets, it's easy to forget that art reproductions are not a new phenomenon; in the 19th century, for instance, plaster casts of Roman antiquities and copies of Old Master paintings were in heavy circulation.

Triple Candie’s ‘Museo de Reproducciones Fotográficas’ is a sly homage to this history. In an otherwise bare space there were 1,200 colour-photocopied reproductions spanning the history of art – indigenous, ancient, modern, contemporary and everything in between – installed in the shape of a candlestick laid sideways, across a wall that bisects the gallery. These images are mixed and matched seemingly randomly, with a healthy sprinkling of provocation thrown into the arrangement, such as a shot of Frank Lloyd Wright’s architectural masterpiece Fallingwater (1935–9) hung near the arse view of a Cindy Sherman mannequin. Toilet humour or complete chance? Hard to say for sure, as some of the juxtapositions were not quite close enough to represent pairings of genuine art-historical intent – such as Louise Bourgeois in her latex breast costume near but not next to the Venus of Willendorf near but not next to a slender Cycladean fertility sculpture. There were a few perfect pairings: the stylized yuppie angst of Robert Longo’s Men in Cities (1981–2000) – pained faces and skinny ties – next to a frenzy of tormented souls in a Last Judgement scene carved on a frieze in the medieval Orvieto Cathedral. Another brilliant pairing is Christopher Wool’s painting PESSIMIST (1995) next to a 1972 political poster by the collective Grupo de Artistas de Vanguardia that reads Defendamos el cobre por Chile (‘We Must Defend Chile’s Copper’). Wool’s painting becomes a kind of non-committal commentary on the political upheaval in Chile in the early 1970s.

Each image is assigned a long number with a decimal point, mimicking the accession numbers used in museums, in an attempt to convey the sterile sensibility and often arbitrary logic of institutional cataloguing and record-keeping (or score-keeping, as the installation seems to imply). Museums necessarily create divisions and categories, which in turn cement into place hierarchies that, the Museo seems to be saying, have grown useless and ridiculous in our Postmodern age. Maybe, maybe not. Last time I checked, ethnic African instruments are more in demand when Peter Gabriel plays them than when Sothebys tries to sell them.

These numbers are then randomized, further contributing to a sense of frustration and confusion. There is a lengthy booklet in which the viewer can look up the numbers (07.797, 09.432 etc.), but this is a drearily comedic business, since the single copy must be shared among all the viewers in the exhibition space. Perhaps the only real entertainment in this venue is the self-satisfaction one gets from being able to tick off which works you can name and date properly. However, these connoisseurial efforts get boring quickly, particularly since the photocopies are small and require a bit of squinting.

The significance of the museum of reproductions, as conceived over a century ago, was the access they afforded to cultural literacy for the non-affluent and a vicarious possession of the great works of Western art and artefacts, thus producing the effect of moral edification. At Triple Candie the effect falls somewhere between museum postcard rack and an obsessive dorm room. It is a project that asks questions about the authenticity of the experience of looking at art, and the ownership of masterpieces and artefacts. As such, it is essentially riding the now tired wave of early 1990s’ art of institutional critique in the vein of Group Material’s AIDS timeline or the recontextualized objects arranged by Fred Wilson or Rene Green. It attempts to dismantle the hierarchies that abound in the process of acquisition, installation and collection. Perversely, it had the opposite effect, inspiring a keen desire to see the museum as something more than a mall, where 18th-century tea cups, 19th-century stereographs, Raymond Pettibon drawings and a Balthus all peacefully co-exist.