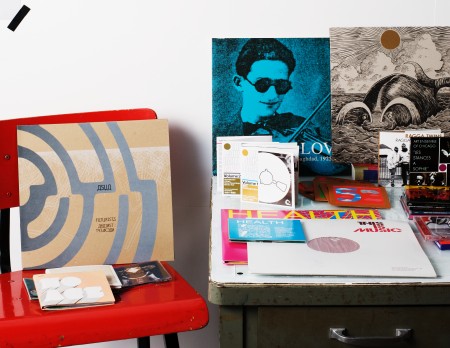 It’s tempting to search for a ‘defining moment’ of 2008, but for now I’ll stick with the one I’m in. Sitting writing in my bedroom, I’m listening to the sounds of the house swirl upstairs and mingle with one of the year’s less anticipated highlights. Art Ensemble of Chicago’s re-released soundtrack to Les Stances à Sophie (1970), a long-forgotten film from the tail-end of the French New Wave, thrums with an immediacy that suggests they might be playing in the room next door rather than a recording studio in Boulogne some 30 years ago. Rolling jazz grooves dissolve into free-form freak-outs and regroup with ease. Two tracks stand out, both variations on a theme by Claudio Monteverdi: horns and scraping, bowed bass set up a centuries-old chord progression that spins off into abstraction before coming back refracted through a blissed-out, early-1970s’ haze.

Like a lot of the best music of 2008, it makes us reflect not only on where we are but also on when. Treasures unearthed from the archive were aplenty. Les Stances à Sophie was put out by the London label Soul Jazz Records, who also released two outstanding compilations: An England Story traced the development of Jamaican MC culture in the UK, while a retrospective of the Ragga Twins (Ragga Twins Step Out!) took us back to the birth of jungle. Two volumes of music by John Baker (The John Baker Tapes, Trunk Records) proved yet again that the BBC Radiophonic Workshop was at the forefront of sonic experimentation during the mid-to-late 20th century, while Analog Africa put out a series of 1970s’ Afrobeat compilations, the highlight being Orchestre Poly-Rythmo de Cotonou’s The Vodoun Effect: Funk and Sato from Benin’s Obscure Labels 1973–1975. Most haunting of all, however, was Give Me Love: Songs of the Brokenhearted, Baghdad, 1925–1929, released by Honest Jon’s Records. It recalls an era when Baghdad was a thriving, multicultural city: the musicians, who came mainly from Iraq’s ancient but now departed Jewish community, performed Egyptian nightclub hits, Muslim devotional songs and country ballads. Like the best archival expeditions, this is anything but an exercise in nostalgia. Honest Jon’s, along with the other labels mentioned above, are actively engaged in rewriting history, alternately challenging and embellishing established narratives. If 1920s’ Baghdad seems aeons away from the UK in 2008, then remember that, at the time, Iraq was under British mandate – the contemporary resonances don’t need spelling out.

Not everyone was looking backwards in 2008. Bassline (also known as niche, after the Sheffield club in which it originated) continued to be the most exciting current in dance music, precisely because it carries the energy of a musical form under construction. Contender for most infectious dance track of the year – along with the South African kwaito producer DJ Mujava’s shuffling ‘Township Funk’ (Warp Records) – is Dexplicit’s ‘Lifey’ (DXP Recordings), with its cascading vocal by the 15-year-old Sweets.

Last year also saw the centenary of Olivier Messiaen marked by a programme of events at the Royal Festival Hall, along with a performance of his 1948 Turangalîla symphony (in brief: tragic love, dread-inducing Mexican statues and a dash of early electronica) by the Berlin Philharmonic, conducted by Simon Rattle, at last year’s BBC Proms in London.

When I interviewed Robert Wyatt – whose back catalogue has just been reissued by Domino – in early 2008, he told me that the job of musicians was to create ‘lost and imagined worlds’. One of the reasons Wyatt’s music retains such power is that he has always related these worlds to the one around him, mixing the emotional depth of the music with a defiantly left-wing political outlook. I’d be tempted to say that sensibility was an anachronism these days, but just as I was wrapping up this column, the new EP by Antony and the Johnsons dropped into my lap. ‘Another World’ (Rough Trade) is a precursor to this year’s forthcoming album The Crying Light. With a voice that sounds like a cross between Arthur Russell and Nina Simone, accompanied by floating piano chords stolen from Claude Debussy, Antony Hegarty is as affecting a singer as ever. But lyrically he’s looking outwards, taking climate change as his theme. ‘I’m interested in the inner garden,’ Hegarty told Wire recently. ‘But I think the next step is: how does this relate to the greater world?’ As the year turns and recession bites, how many more musicians will follow him? And, more importantly, where will they go?

Frances Morgan
Publisher of Plan B and a regular contributor to Terrorizer and New Statesman. She is also a musician and a curator of live music.

Surveying a year in underground music can feel a little like observing organisms multiplying under a microscope – fascinating, yet exhausting to catalogue. There is pressure to note the niche developments yet also to acknowledge innovation in the mainstream, and there is always a taxonomic imperative to name fresh genres and hybrids.

It is easy to forget the power of one record’s ability to still the critical babble and exist in a space of its own making. In April 2008, the Seattle-based metal band Asva released their second full-length album, What You Don’t Know Is Frontier, which served as a reminder of both this fact and of how there is an emotional force that extreme sound can wield when it is conceptually thorough and deeply felt. Consisting of four long tracks that work extended, doomy riffs into experimental soundscapes and vocals (by singer Holly Johnson) drawn from Javanese traditional music, What You Don’t Know Is Frontier fits well alongside other releases said to redraw metal’s boundaries. The album was released by Southern Records, which in recent years, along with Southern Lord, has played host to impressive work from paradigmatic metal bands such as Earth, Om and Sunn O))). Yet it is Asva’s album I come back to with compulsive regularity, each time uncovering new detail and complexity beneath the monolithic foundations of G. Stuart Dahlquist’s bass and B.R.A.D.’s drums.

As both Dahlquist and B.R.A.D. had been members of cult 1990s’ doom band Burning Witch (alongside Sunn O)))’s Stephen O’Malley), previous form dictated that the two would produce music that plumbed depths and scraped edges both tonally and emotionally. But What You Don’t Know Is Frontier contains a different kind of depth: the sonic illusion of vast, dark space that could be said to represent the frontier of the title. It is not abject extremism, nor the harsh, elegant architecture of previous album Futurists Against the Ocean: it has an emotional depth that suggests the infinite terrain of human loss. What You Don’t Know Is Frontier was, in fact, written in the wake of bereavement: Dahlquist lost his brother Michael in 2005. The bassist explains: ‘It seemed to me that the best thing I could do was write something that related directly to my love and respect for him […] an homage. I’m not sure that What You Don’t Know Is Frontier didn’t become more homage to my personal grief in the end.’

The record’s emotional affect lies in the intersection of Dahlquist’s understated use of melodic forms and attention to texture – the acknowledgement of noise, feedback realized by the guitarist Trey Spruance and, most crucially, producer Randall Dunn (who also worked with Earth on their album The Bees Made Honey in the Lion’s Skull). Dunn is responsible for the volcanic rumbles, oceanic roars and earthy hums that provide a distant but essential environment for the music to inhabit, as well as the album’s impressive realization of space – an effect achieved by the careful layering and panning of multiple tracks. Dunn, says Dahlquist, ‘has an extraordinary talent for looking ahead in the studio. Many of those details can seem superfluous at the time, but when it comes to mix-down, frequently that’s the tone or texture the track needed.’

‘Communicating atmosphere and feeling is where things get difficult because I don’t consider the two as being the same thing. Atmosphere is the physical space a recording evokes. Feeling is the step beyond atmosphere. It’s the subliminal workings – things that aren’t seen or heard but are sensed as coming from beyond the work – that create feeling, and feeling can get lost if there’s too much adornment.’

The presence of Hammond organ throughout the album seems, at times, a direct response to over-complication – stately drones and contemplative melodies that reference devotional music more than rock. Says Dahlquist, ‘A lot of ideas become much better after trying to play the part on the keyboard; the bass and guitar parts become more controlled, and the music becomes less abrupt, less jagged.’

The use of organ is also illustrative of the process by which doom metal’s conventions have been expanded – shifting the focus away from the guitar, while still channelling the weight and power integral to the form. Critical appreciation of the genre has, in the last five or so years, increased: yet often it has been tinged with a morbid concentration on metal’s theatrical props and esotericism – explored, maybe exploited, most for the art music audience by Sunn O))), whose use of black metal aesthetics comes close to Performance art. Less acknowledged, now that the critical limelight has faded somewhat, is the achievement of bands such as Asva in approaching metal with the methodology of modern composition and using ‘heaviness’ as a redemptive quality rather than an abject one – in itself a neat détournement of doom metal’s initial motivations.

It does not feel right to position Asva’s What You Don’t Know Is Frontier within a zeitgeist, for its power seems to have no fixed temporal point other than its own. For that very reason, it is 2008’s most compelling record in the field of extreme music.