Her videos gently unhinge your sense of time and space. No special effects are used, and all the actions shown are real events, none of them what you might call spectacular 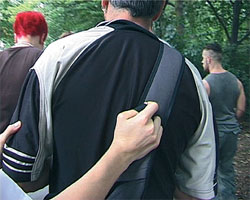 The techniques Nina Könnemann employs are simple. An oblique camera angle, a time-stretching take, and the occasional counter-intuitive cut or unexpected sweep: this all it takes to set the mind adrift and alter your perception of the images in front of you: you see what you see, but you just can’t make out what it is you are looking at.
In M.U.D. (2000) the camera slowly pans across a park at daybreak the morning after an unnamed festival. Mist is rising from a litter-strewn patch of grass and mixing with smoke from smouldering campfires. Teenagers in grungy outfits wander about lazily. Occasionally someone stops to inspect some relic of the previous night’s festivities. Old men collect bottles for recycling. The scenario is as apocalyptic as it is peaceful: a pastoral vision of purgatory. Judgement day was yesterday. In its aftermath time has become a void that elicits apparently random actions and gratuitous gestures. Reality is putting on a show that looks like something by Samuel Beckett. And indeed a character appears who could be one of Beckett’s creations: a tall figure in a plastic poncho, face partially covered by a hood, riffling through the litter with a stick. Some boys pester him but soon lose interest, and he blends in again with the other dislocated figures in the park. He is an actor. Yet, like a mirror among mirrors, his appearance only testifies to the indifference of his presence. At the festival, in the park, everyone is performing but no one is acting, because time itself is held in abeyance. The concept of acting, of agency, has become radically unclear.
Unrise (2003) explores this theme further. The location is the futuristic under-ground station at Potsdamer Platz in Berlin. The place looks like a deserted space lab, with its elevated ceilings, illuminated glass walls and polished floor. It’s daytime. Young people are passing by. To judge from their clubbing gear, dazed expressions and jerky actions they must be on their way to, or returning from, some sort of parade. The huge, brightly lit, empty space makes everyone look as though they are on stage and somehow out of place. Some disoriented revellers perform small, autistic dramas of exhaustion, confusion or rage, brain and body visibly out of synch. Some start interacting with the camera. One guy sits down to face it, remains silent for a while, then puts his blood-stained fingers on the lens and mumbles, ‘you can’t go in with a hand like that’. As he staggers away, he passes three boys singing the tune of an ice-cream ad in harmony to a group of girls. This is reality. In a brightly lit twilight zone right under the centre of the German capital a disparate set of characters is improvising an unscripted drama for a generation lost in space.
Though the performances in Könne-mann’s videos often take place within, or subsequently reflect on, a specific social setting, it is at a phenomenological level that they are so unsettling. Der Firmling (The Confirmation Candidate, 2004), for example, was shot during Berlin’s Love Parade, but the event itself is pushed into the background by a single small gesture: a white-shirted boy in the crowd firmly holding the loop of an older man’s rucksack with his thumb. Könnemann focuses in on this particular scene and tracks it as the parade moves on. The boy controls the man’s body with a single finger. It could be a son taking his drunken father home, yet their relationship is defined in corporal terms. To the viewer the hooked finger is an image of pure intensity and power. In the installation Spurlos (Without Trace, 2004) Könnemann projected this video onto a wall, behind which Castles Made of Sand (2004) was playing on a monitor with headphones. Here the camera moves through a dull pedestrian underpass before suddenly swerving to the left and coming to rest against the yellow tiles of the wall. Then it slides back into the centre of the walkway, only to swerve against the opposite wall, and so forth after every few steps. The effect is overpowering. On the soundtrack dizzy guitar riffs eventually crystallize into Jimi Hendrix’s ‘Castles Made of Sand’. The piece is like a visceral meditation on the pleasures and fears engendered by the possession and loss of physical control.
Könnemann’s videos make you feel that it takes no more than a gentle slip of the hand or askew glance for reality to unravel. And when the matrix of orchestrated events that regulates social performance does start to come undone, time starts to flow away, space becomes indistinct and the body manifests its intensities in surprisingly minor actions. That Könnemann uses video in this way is significant. Video is a medium designed to record real events in real time. In our society it is the most prominent method of generating visual data. By undermining its normative, realist power Könnemann works against the grain of the medium, making other realities emerge in the process.