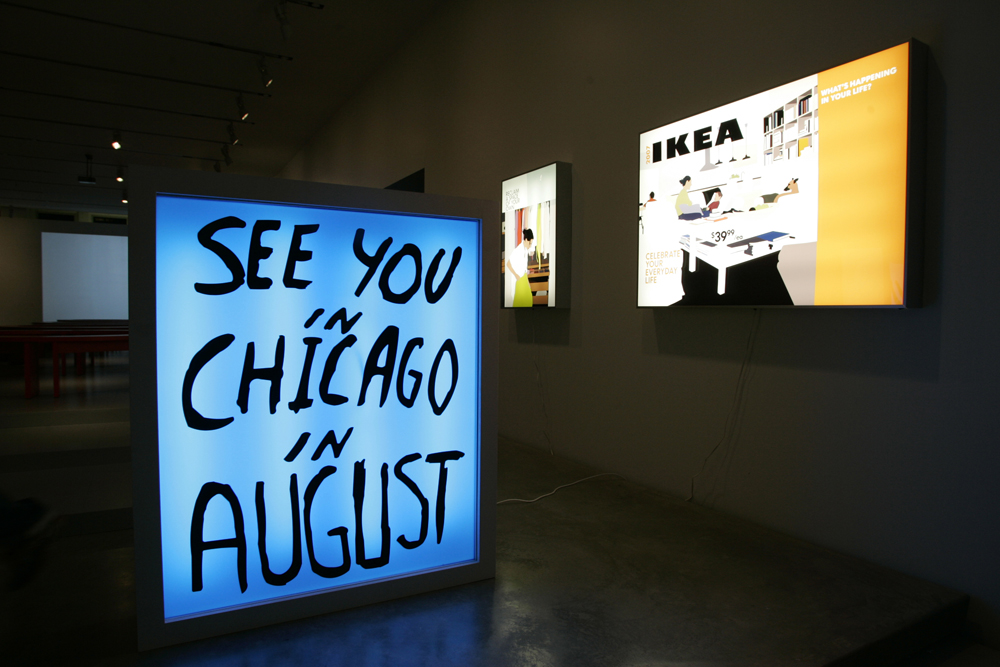 A thematic exhibition designed to coincide with the US election year, ‘Ours: Democracy in the Age of Branding’ was a small but sprawling group show with grand ideals, waging a visual argument about the high personal stakes of both political and consumer participation and the toll they take on individual identity. As such, slogans and messages – both deadly earnest and deadly ironic – abounded. True to its commitment of participation, ‘Ours’ offered an ambitious educational component seemingly influenced by Documenta 11’s platform model of itinerant symposia and workshops.

Called charettes, these workshops were conducted by faculty and occurred within the gallery space on a platform that was the high-design centrepiece of the show. It included four circular red benches by Liam Gillick titled Revised Sochaux Structures (2008). Here seated viewers (many of whom were students) were arranged into a circle, a primal symbol of inclusion, recalling scout campfires and/or feminist consciousness-raising groups. In light of the recent protests at The New School, curator Carin Kuoni’s focus on student participation seemed particularly prescient.

Besides a strong and dedicated educational initiative, the exhibition comprised a mixed roster of emerging (Carey Young, The Yes Men) and more high-profile socially conscious artists (Paul Chan, Sam Durant, Gillick), who, by and large, make Conceptual, video, photographic and installation-based art works. This is nothing new, but such an exhibition felt startlingly – and deceptively – original because Agitprop work hasn’t been seen in New York for a while, at least not since the early 1990s, when artists such as Jimmy Durham, Hans Haacke and Martha Rosler were known as ‘Whitney artists’ (as though the Whitney Museum had its own stable of artists) for their consistent appearance in the biennials and, more notably, the spate of Whitney Independent Study Program Exhibitions and its coursework during its heyday in the early ’90s. Mounted by student–curators encouraged to work thematically, these shows had short runs but long shelf-lives, allowing for the opportunity to conceive of a concept, either historical or theoretical in nature, such as ‘Homeland’, ‘Abject Art’ or, as late as 2004, ‘Social Capital’.

Group thinking was also in evidence in ‘Ours’, with its charettes initiative, a diverse and active web and mobile phone programme and a cadre of interns and exhibition co-ordinators. This signals that perhaps the most interesting aspects of the exhibition were actually taking place via the experience of active participation (i.e., attendance, actual or virtual) rather than in the gallery – which is why the experience of the art works themselves was, predictably, a bit underwhelming: Chan’s flat, unwatchable video Untitled Video on Lynne Stewart and Her Conviction, the Law, and Poetry (2006), for example, or Susan Hiller’s The Last Silent Movie (2007), a 21-minute video about extinction and causality, in the form of dying languages and cultures under threat from the impact of globalization. Both videos would have had more of an impact if they hadn’t had to compete with so many others. On the other hand, Sharon Hayes’ My Fellow Americans 1981–1988 (2004–6), a nine-hour marathon reading of all of Ronald Reagan’s official ‘Address to the Nation’ speeches, was earnest artistic labour at its best, an endurance performance in which Hayes’ exhausted blankness reinforced the drivel of the material.

The object-driven work created light relief from the sombre video and offset poster work. Aside from Gillick, the German-born artist Kota Ezawa’s light-box transparencies of fake IKEA ads lightened the mood, as did Miguel Luciano’s Cuando las gallinas mean (When Hens Pee, 2003), a vending-machine frivolity that twists a Puerto Rican maxim aimed at silencing children, ‘You can speak when hens pee’. The piece was a welcome inclusion, both for its domestic twist on its theme of democracy and for the sheer novelty of seeing a clucking plastic hen, complete with bells and whistles, peeing for money.