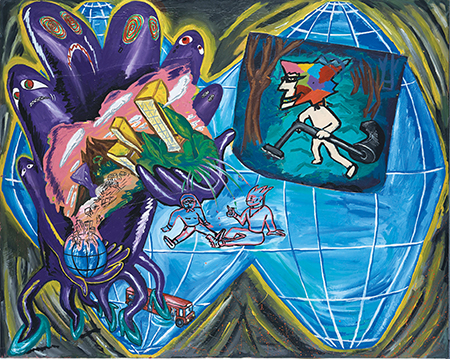 Having seen a small exhibition of Patricia Gadea’s paintings in 2012 at García Galería in Madrid, I felt like running to her first retrospective. Active from the 1980s until her untimely death at the age of 46 in 1996, Gadea was one of the most talented, subversive and under-acknowledged figurative painters on the Spanish art scene.

Gadea’s oeuvre is closely associated with Madrid’s ‘Movida’, a hedonistic and free-spirited counter-cultural movement that arose in the early ’80s, after the death of General Franco, when Spain was slowly but buoyantly transitioning from a 40-year dictatorship into a fully fledged democracy.

In her 20s, Gadea captivated gallerists and viewers alike with her often-hilarious, large-format paintings that incorporate or appropriate comic imagery. Her early work also displays her interest in cartography and geography. Images of the globe and the contours of the Iberian Peninsula feature profusely, as if Gadea were trying to figure out Spain’s place in the world, at a point at which budding democratic ideals co-existed with out-dated stances towards gender, religion, art, and dissent, still deeply entrenched in the Spanish collective imaginary.

In El Ritmo del mundo (The Rhythm of the World, 1984), for example, a large map of the globe houses a five-headed purple creature, seemingly representing the West, which twists in upheaval. To the right of the canvas, a human figure, its head the shape of the Iberian Peninsula, vacuums and smiles blankly, as if oblivious to international turmoil. Whether Gadea is mocking the common assumption that Spanish immigrants across Europe would wind up as domestic cleaners, or that Spain itself was too caught up in its own ‘domestic affairs’ to be able to participate in the global agenda, is never made clear. In Capricho (Caprice, 1986) a globe-headed butler drags a trolley, which supports a Flemish-style still life, towards a Native American surrounded by tepees and bloody footsteps. Ostensibly anti-colonial, the painting makes its point while being both comic and joyful.

Interpreting Gadea’s paintings too literally, though, can be counter-productive. They are best read as visual streams of consciousness, acidic free associations where vibrant colours, thick impastos and cartoon sensibilities collide. Their meaning lurks in the background, like an afterthought that freezes a smile. In this respect, Gadea was part of a zeitgeist embodied by her contemporary Martin Kippenberger or, closer to home, the group of figurative painters known as Los Esquizos de Madrid (The Schizos from Madrid), who mixed pop, surreal and drug-fuelled aesthetics in the service of a highly satirical agenda.

Gadea moved to New York in the mid-1980s, where, with her husband, the artist Juan Ugalde, and the poet Dionisio Cañas, she formed the artist collective Estrujenbank – a play on the Spanish verb estrujer, which means to squeeze or crush. By the early 1990s, she was back in Spain and her work had become even more politicized and opinionated. Her 1992 exhibition ‘Atomic-Circus’ – also the title of the Museo Reina Sofía show – comprised a series of paintings in which the circus was protagonist. Only, it wasn’t tigers and jugglers that she was aiming her brush at, but the farce of Spanish politics, where corrupt leaders served as clowns.

Increasingly alienated, disappointed with the whims and flaws of the Madrid art scene and struggling with her own addictions, Gadea moved to Palencia, a provincial town in northwest Spain, where she made ends meet by teaching drawing to local children and the elderly. Her prolific paintings from the time are still fiery, but with a greater focus on gender issues. Diosas, esposas, rameras y esclavas (Goddesses, wives, whores and slaves, 1993) is a case in point, with its amalgamated depiction of tired female archetypes rendered in various comic styles.

As is so often the case, Gadea’s death from a drug overdose, in 2006, when she was penniless and forgotten, in Palencia, reignited interest in her work. Thanks to a group of curators, artists and friends, a reappraisal of her career has gained momentum slowly, leading to this show, her first retrospective. Relatively small and taut, ‘Atomic-Circus’ cleverly avoided falling for the rhetoric of the damned artist and pitching overegged readings of the works. Instead, curator Virginia Torrente’s light touch let Gadea’s bright and acerbic works do all the talking, tersely presenting an overlooked body of work ripe for reassessment and inclusion in the history of both contemporary painting and Spanish art.