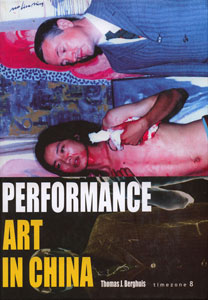 ‘In order to civilize the mind, one must first make savage the body.’
Mao Zedong

On the afternoon of the 5 February 1989, the day of the official opening of the ‘China Modern Art Exhibition’ in Beijing, the artist Xiao Lu walked into the ground floor of the gallery and drew a borrowed pistol from her pocket. She fired two shots into the glass mirror that formed the centrepiece of her own installation, Dialogue (1989), before being promptly arrested by gallery security guards. Her action would lead not only to a prison sentence and the closure of the entire exhibition but also to the complete (if temporary) withdrawal of official support for performance art in China, a move that virtually constituted a ban on the genre.

A decade later Zhu Yu constructed an installation from a severed human arm (bought for 500 renminbi) suspended on a meat hook and holding a rope. A year after that, he raised the stakes again by sitting down to a meal of deep-fried still-born foetus accompanied by Caesar salad and orange juice. In a statement released with the documentation of the work he wrote, ‘Morals and ethics are nothing but something which human kind changes at will.’ Unlike Xiao Lu, Zhu Yu has never been officially censored (although since then the criminal code has been amended to include the prohibition of cannibalism).
That one act received such harsh condemnation while the other raised no more than mild consternation can be seen as a mark of the extraordinary velocity of change in Chinese culture, but also of the helplessness of Western schemas in interpreting Chinese art. Thomas Berghuis’ publication Performance Art in China (2006) attempts to bring some insight to this bewildering field. The result of seven years of research, the book draws on hundreds of published sources in Chinese, French, English and German culled from an unprecedented range of archives, both public and private, and over 70 hours of interviews with artists. The generous detailing of these sources, and the inclusion of a chronology and a bilingual index of artists cited, render the book an essential resource for those engaged with contemporary Asian art.

More esoterically, Berghuis’ book shows how Western Modernist divisions between avant-garde and academicism, official art and subversion, state and market, break down entirely in the landscape of Chinese performance. Protagonists constantly change sides, shift genres and move seamlessly between publicly acceptable and prohibited practice. In Appendix IV Berghuis enumerates a taxonomy that brings to mind Jorge Luis Borges’ encyclopaedia. His categories of performance include ‘the body in endurance and transcendence’, ‘the body in self-mutilation, masochism or necrophagy’ and a separate category for ‘disconcerting events’. Space constraints don’t allow me to expand here, but suffice to say that some of the performances detailed within make Chris Burden look like a big girl’s blouse.

A word of warning: the proofreading, in chapters one and two especially, is rough. More typographical errors make it into print than would normally be acceptable in an art-history textbook – enough to introduce unwelcome ambiguities. Although they are chiefly errors that would be readily erased by a second edition, they limit the text’s accessibility; nonetheless, they do not diminish the importance of this book as the first major overview of performance art in China.