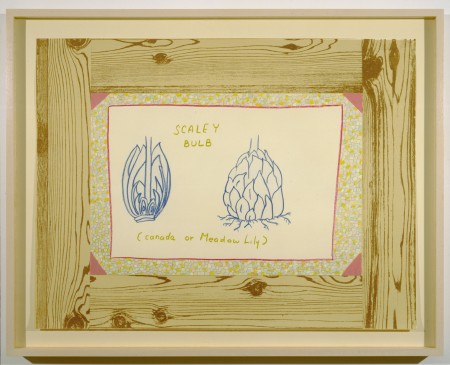 The catalogue accompanying ‘At the Still Point of the Turning World’, the Ree Morton survey at the Drawing Center, tells us that her work contains a ‘personal narrative’. This is just the kind of thing one wants to find in the work of an artist with such a vivid biography: Morton trained briefly as a nurse in the mid-1950s, before marrying a naval officer and then spending a peripatetic few years raising three children. She only devoted herself to art in the late 1960s, upon which she left her husband and children and did a BFA (hers was a classic feminist tale). She digested the likes of Eva Hesse, and then – so the show’s curator João Ribas convincingly asserts – suddenly and impressively emerged as a mature artist. But in 1977, shortly before her 41st birthday, she died in a car crash – robbed, like her approximate peers Hesse, Ana Mendieta and Robert Smithson, of perhaps her greatest opportunities.

Morton generated a considerable – and considerably diverse – body of work in the ten years she spent as a practicing artist. ‘At the Still Point of the Turning World’ inevitably focuses mostly on her works on paper, but this is not inappropriate for an artist who, as MoMA curator Connie Butler points out in the catalogue, shares affinities with Allen Ruppersberg – their work is similar in ranging across media and often delving into literature (the American Minimalist sculptor Scott Burton called Morton ‘Emily Dickinson in love with Raymond Roussel’, and this survey’s title is taken from a T.S. Eliot poem that Morton kept in her studio). The media of pen and pencil also suited her post-Minimalism. Some of her first drawings, in the ‘Repetition Series’ (1970), present a grid of elementary pencil marks that have been progressively broadened and shadowed to evoke wounds or tears. Another drawing, an untitled piece from 1969, sets off an unsettling percussive clash, with stacks of short horizontal lines piled up on long verticals, like papers on a spike. Morton was pre-eminently a sculptor, interested at first in questions of site and phenomenology, but these issues also found their way into her work on paper. The ‘Newfoundland Drawings’, produced in 1973 during a summer spent with her children, borrow motifs from organic and ancient cultural forms, and transform them into faintly cartographic diagrams. One drawing resembles a huge, upended pustule, delineated with various ridges and contours.

Among Morton’s early notes there is a list of likes and dislikes, and under the latter appears ‘Abstract Expressionism’. The style was all but exhausted by the time she wrote this list (around 1968), yet it continued to hold sway academically, and, at least early on in her career, one sometimes wonders whether Morton was herself still trying to exorcise it. It is not simply that so much of her work is grounded in abstraction, because often her handling of motifs points to deliberation, rather than spontaneous expression. But the ‘Newfoundland Drawings’ were inspired by how the archaic could be a vessel for a species of ‘personal narrative’ – albeit not a confessional, biographical one – in ways that Mark Rothko and Barnett Newman would have understood.

Stylistically, however, Morton was always on the move. The ‘Game-Map Drawings’ (1972–3), which were produced around the same time as the ‘Newfoundland Drawings’, resemble overhead views of paths and hillocks in well-kept countryside – except for strange digressions: they are bordered by a goofy, semi-circular pattern, beyond which are a series of polygons that vary in number, like counters, with each drawing; broken lines border the paths, like notations from maps; and vertical arrows occupy spots where one might expect there to be man-made features. Another series of landscape-based drawings, from 1974, display banners bearing names derived from an eccentric botanical text. One, entitled Jack in the Pulpit, hints at women’s anger from ages past, with phrases like ‘gay deceiver’, ‘a wolf in sheep’s clothing’, and ‘brother to dragons’. This may be as close as Morton got to something that deserves the name ‘personal narrative’: one can read it into all her work, if it suits, but her revelations of self take many forms, and at best they are slight, and veiled.

Morton pursued a multitude of avenues in her short but fruitful career. Sometimes, it must be said, those journeys were unsuccessful: Devil Chaser (1975–6), the most significant sculpture in the show, and typical of her later work, contains a few loops of rope tied with multi-coloured bows, and stiffened such that they sit up as if dancing in space. Spatially it is indistinct, and the circle of letters on the floor, spelling out the title, gives it no more definition. More often, however, those journeys brought home treasures: the 1971 ‘Wood Drawings’ series comprises a marvellous, backwoods post-Minimalism, with garden-shed lumber, nails, hinges and suchlike being employed as bases for systematic notations. But, whether her effort proved successful or not, Morton rarely hung around in one place for long.