Scene of the Crime

The photographic archives of the Los Angeles Police Department 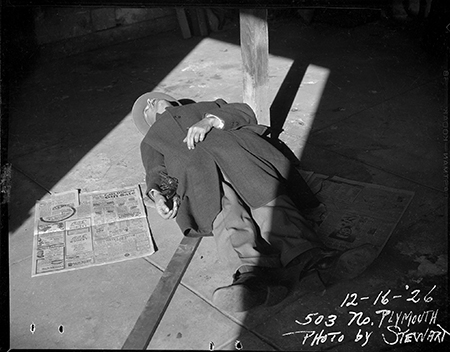 In My Dark Places: An la Crime Memoir (1996), ‘hardboiled’ author James Ellroy inaugurates his tale of the 1950s Southland with the gruesome discovery of a female corpse. As Ellroy coolly reports it: ‘She looked like a classic late-night body dump […] Half the 26-man El Monte pd cruised by – dead white women were some kind of draw.’ However, at 100 pages, nearly a quarter of the length of the entire text, Ellroy’s detailed illustration of the crime scene might have verged on authorial ‘overkill’ of its victim had it not been the real-life description of the 1958 murder of Geneva Ellroy, the writer’s own mother.

Included in the title page of My Dark Places’s opening section is Mrs Ellroy’s photograph, recorded on the morning of her death by the County Coroner, and unearthed by her son some 35 years later among the ‘unsolved’ case files of the Los Angeles Police Department (LAPD). Like Georges Bataille, Luc Sante, Philippe Soupault and Andy Warhol before him, Ellroy, in choosing to reproduce a visual cast of the scene of the crime, rendered photography’s darkest function – forensic reportage – as a work of vernacular art.

The most extreme sub-genre of street photography, crime scene imagery was traditionally viewed as a measuring tool, practiced within a 19th century optic of urban design – so-called bertillonage. The majority of work was dedicated to cities such as New York, London and Paris via police, yellow press and fine-art photographers including Eugène Atget, Bill Brandt, Brassaï, Nadar, John Thomson and Weegee. Only recently has an evaluative survey of crime photography branched out to include cities like LA, whose decentralized and car-oriented urban sprawl diminished the architectural leitmotifs of the boulevard, park and tenement highly prized by street photographers or, as Roland Barthes put it, the fait divers.

As a pithy, narrative counterpart to the crime photograph, fait divers were an urban, tabloid invention capturing the ordinary in city life, which played out on the public stage for popular consumption – any of a hodge-podge of scandals, accidents, suicides, fires and executions, accord­ing to an 1872 edition of Le Grand Larousse Universel. However, in the scandal-monger’s la, the distinct experience of ‘trespassing [into] countless small details of otherwise unrecorded lives’ described by Sante in his landmark text, Evidence: NYPD Crime Scene Photographs 1914–1918 (2006), often warranted an additional intrusion into the privatized spaces of the automobile, bungalow court or suburban subdivision – spaces frequently invisible to the public eye from the perspective of the street.

‘To Protect And Serve: The LAPD Archives’ – organized by Fototeka gallery owners Robin Blackman and Rick Morton with then Los Angeles County Museum of Art curator Tim Wride – was the first major initiative to redress this omission in the city’s photographic landscape. It has been exhibited in various iterations in America and Europe since 2001, including, most recently, at this year’s Paris Photo Los Angeles Fair. Sourced largely from the LAPD’s Scientific Investigations Division (sid) – which, originating from 1924, is the oldest crime laboratory in the us – the archive was created out of nearly a million images, dating from SID’s founding through to 1975, in large-format cellulose nitrate, medium-format safety film and 35mm negatives.

‘At first glance, the archive reassuringly contains exactly what we have been conditioned to expect: the prerequisite scenes of murder, mayhem and perversity, safely distanced portraits […] that mark a romanticized time gone by,’ writes Wride in the accompanying catalogue, Scene of the Crime: Photographs from the LAPD Archive (2005). But, upon further investigation, the photos revealed the dissembling metrics of forensic portraiture. Because many of the photographers responsible were uncredited or differentiated by a simple surname, nickname or initial on the negative, most attempts at verification were fruitless. Cryptic sobriquets like ‘Driver’, ‘RR’ and ‘Munns’ provided limited clues to their identities. Some images engaged in choreographed deception – they appeared to display crime scenes but were, in actuality, training photographs employing a living officer for a cadaver. Other images that failed to reference any case number or juridical documentation, due perhaps to improper storage or misidentification, were stripped of their evidentiary discourse and became indecipherable, violent tableaux, whose characters looked both tragic and banal in their anonymity.

‘We never discovered any instruction on how they were supposed to shoot a crime scene,’ says Morton of the forensics team. ‘It was not like looking at the NYPD work, which was very specific and consistent. A lot of the images were left to the photographer’s eye.’ What the photos did share, however, was a sense of cinematic framing and proficient use of techniques such as depth-of-field, characterization (often investigators or assembled crowds were purposely included in the shot) and artificial light and shadow. ‘There are so many images from the time period when film noir is being produced and the photographs look like they are taken on a film set,’ adds Blackman, regarding their style and heavy dependence upon interiors. ‘So we always wondered who was copying who.’ Indeed, if the photos in Scene of the Crime ... look strangely familiar – even prosaic – in their horrors, it is largely due to their repetition and multiplication ad infinitum in Law and Order, CSI and other Hollywood TV serials.

The parallel between crime and visual iconography also appeared in LA-based art with the arrival of Man Ray to the city in the 1940s, followed shortly thereafter by the New York crime photographer Weegee in late 1947. As a pre-war expatriate, Man Ray’s sojourn to Paris had introduced him to surrealist favourites like the exquisite corpse parlour game Fantômas and the fait divers of the French newspaper Le Petit Parisien, whose disturbing imagery filtered deliberately into the artist’s work (for instance, Monument to D.A.F. de Sade, 1933, or Juliet on the Couch at 1245 Vine Street, 1945).

Weegee, who famously quipped of Hollywood’s artificial veneer that it was ‘Newark, New Jersey, with palm trees’ had attained celebrity for developing the tabloid photograph’s urban, gothic vernacular in Naked City (1945). Abetted by the city’s scandal-heavy Herald-Express and Examiner and a postwar surfeit of unsolved homicides (LA was often referred to as ‘the port of missing persons’), Man Ray and Weegee inspired a visual acuity in local artists who sought a new, urban identity for the American West. Seminal contributions appeared in genres from pop and Chicano street art to light and space, miniatures and video art, and included: Ed Kienholz’s Back Seat Dodge ’38 (1964) and Five Car Stud (1969–72), Bruce Nauman’s Failing to Levitate in My Studio (1966), Ed Ruscha’s Every Building on the Sunset Strip (1966), Frank Romero’s Death of Rubén Salazar (1984), Asco’s First Supper (After a Major Riot) (1974), Robert Heinecken’s Inaugural Excerpt Videograms (1981), and Mike Kelley and David Askevold’s Pay For Your Pleasure (1988). The tradition continued in works such as Melanie Pullen’s ‘High Fashion Crime Scenes’ (1995–2005), Neck Face’s Cannibal Carnival (2008), the graffiti art of Cristian Gheorghiu (aka Smear), Abigail Goldman’s ‘Dieoramas’ series and the noir-inspired photography of Rocky Schenck.

‘As long as people have an interest in malevolence, crime will show up in all forms of visual arts,’ explains Glynn Martin, executive director of the Los Angeles Police Museum (LAPM). ‘The public has an insatiable appetite for […] the murder of Elizabeth Short, the assassination of Senator Robert Kennedy and the Manson family murders.’ A unique entity purposed more for civic history than arts curation, the Police Museum has, in a separate initiative, begun scanning and digitally archiving a cache of some 50,000 LAPD images, made up of negatives, slides and photographs donated by former officers. The collection comprises a visual record of the department from the 1890s through to the 1970s, featuring pictures of crime scenes, inter-departmental events and athletics, as well as officer portraits and daily operations. Additionally, the LAPM, with assistance from the Getty Museum, is digitizing the police department’s in-house collection of Daily Bulletins, a newsletter that, from 1907, was distributed to officers for over a half-century. As a diurnal log, its records were necessarily mundane and gruesome – juxtaposing news of stolen neckties and bicycles between announcements of Woodrow Wilson’s visiting motorcade or the unsolved mutilations of Short and Marion Parker. Nicknamed ‘the paper policeman’, the Daily Bulletins’s exhaustive inventory of fait divers will offer an unprecedented survey of 20th century LA, both in its ‘official’ and ‘minoritarian’ histories.

Investigating these ‘minor’ histories was the central task of the internet-based 1947project.com, a virtual museum of LA urban folklore. Developed by art-historian Kim Cooper, 1947project’s form of digital anthropology and psychogeography relayed a daily record of crimes during 1947 – one of the city’s most scandalous years – complete with maps, photographs and other public records. The site’s online popularity led Cooper and fellow art historian, Richard Schave, a former student of the critic Reyner Banham, to motorize their archive into a hybrid form of weekend art happening and speculative tourism, which treats riders to surveys of crime scenes and other neighbourhood folklore around the city. Called, appropriately, Esotouric, the roving museum avoids the novelty scripting of Hollywood charters and, instead, encourages a freeway flânerie of bygone landmarks including South LA’s West Adams neighbourhood, Millionaire’s Row in Pasadena and the revitalized Arts District in downtown’s former industrial sector. Among the assembled lecturers and tour-guides are Ellroy and the LA noir historian John Buntin. While figures such as Short and Mickey Cohen are the focus of the majority of the tours, they are used principally as ciphers for interrogating the latent architectures, demographics and sub-cultures left unarticulated in LA’s current parlance of sprawl.

Most recently, Esotouric has launched the Los Angeles Visionaries Association (LAVA), a user-based bulletin board and real-life gathering place for art openings, civic petitions, forensics seminars and urban-planning walking tours. Founded, in Cooper and Schave’s words, to combat the clichéd experience of disconnection endemic to LA’s freeway culture, LAVA’s list of contributors includes local artists/activists Crimebo the Clown and Jules Rochielle, and former Metropolitan Museum of Art curator, Allon Schoener. Like its surrealist forebears, Esotouric, in bridging the fantasies of crime and art, aims toward a living archive of performance and political action that is, beyond hollow nostalgia, devoted to LA’s future.