The current craze for African funk and soul reissues began with the death in 1997 of the Afrobeat pioneer and legendary Nigerian musician Fela Anikulapo Kuti. Dedicated to the pursuit of undiscovered new highs, after pressing a tune to vinyl Kuti’s band would never again perform it – and he had dozens of hits. Tribute reissues began after his death, and the tide hasn’t been stemmed. If anything, it’s increased: Kuti’s success opened doors for lesser-known artists. The past six months have seen no fewer than four reissue compilations released on as many different labels. The identically marketed CDs are variously subtitled: Raw and Psychedelic Afro Sounds from Benin & Togo 70s, Psychedelic Afro-Rock & Fuzz Funk in 1970s Nigeria, Original Heavy-weight Afro Beat and Funk and so on. Kuti – who was hostile to Western interests and imbued with a visionary’s antipathy for nostalgia – would have marvelled.

The best of this season’s reissue crop is African Scream Contest: Raw and Psychedelic Afro Sounds from Benin & Togo 70s. Fourteen obscure groups blaze through ingenious arrangements. Liquid guitars and funky horns take surprising turns of melody atop upbeat percussion. Psychedelic? Not really, although the word helps with marketing. Raw? Yes, and joyfully raucous, especially the vocals. The 44-page booklet accompanying Contest is a treat, commanding at least as much attention as the music itself. In it Samy Ben Redjeb, the German owner of the Analog Africa label, meticulously narrates his adventures finding musicians with rich anecdotes (taking out radio advertisements to find one singer and discovering another in the local police force’s music department, staffed by boisterous James Brown fans). Interviews and photographs reminiscent of Malick Sidibé contextualize the music’s era – even after the countries’ post-independence bubble of optimism had popped, a party was still a party. Like any proud record-digger, Redjeb also chronicles the hunt for rare LPs: ‘After about a week’s worth of searching, we cleaned the place out of the most desirable music. Although our search was highly fruitful, we were glad to finally escape that warehouse. There were scorpions in there, some of which we didn’t notice until they were crawling all over our hands! We carefully packed all the records, and a few days later I was on my way back to Frankfurt, my precious cargo stored away in the belly of an Air France plane – approximately 3,800 African vinyl records.’ 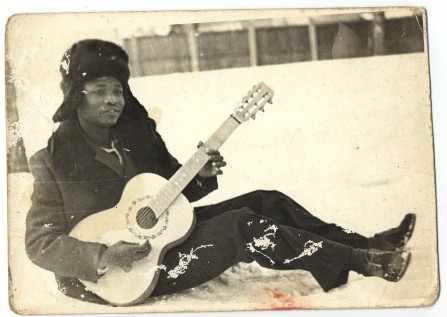 The liner notes include Redjeb’s phone number, ‘To Purchase Original African Records’. What Analog Africa’s excellent compilation gives us are copies. The originals, recently pried out of a warehouse in Benin, patiently await buyers in Frankfurt. Analogue scarcity – whether signed artist prints or stamps – lends itself to a cult of the collector. Aura spikes value.

In a world of rock songs sold as ringtones and YouTube-launched singles, there’s something heroic about Redjeb’s travails. Reissues aside, there are no more treasured ‘master tapes’ to be repackaged and sold years later. The music of the early 21st century exists in a digital ecosystem. Songs now travel from a recording studio’s hard drive to CD and beyond in the form of zeros and ones. The implications reach even further than Andy Warhol’s consummately American take on Pop: ‘A Coke is a Coke, and no amount of money can get you a better Coke than the one the bum on the corner is drinking. All the Cokes are the same and all the Cokes are good. Liz Taylor knows it, the President knows it, the bum knows it, and you know it.’

Not only are all digital copies the same, but downloading 3,800 albums leaves the digital warehouse fuller than when you began. We’re living in a post-scarcity mediascape. As Mercedes Bunz explains: ‘the digital copy subtracts its secondary status. It doesn’t copy a previous original, it duplicates it. Thus, the copy’s traditional dependence on its original no longer exists, since the second version doesn’t differentiate itself from the first.’1

You can’t help but wonder how a man like Redjeb will dig for off-the-beaten-path music 40 years from now. For future hunter–gatherers of musical greatness, those dusty Benin warehouses filled with scorpions and records whose local relevance has long since evaporated will have been replaced by … what, exactly? Cluttered hard drives? Obsolete iPhones? Some people hoard MP3s, but nobody collects them in the traditional sense. Digital Africa is exemplified by the trio of expat Africans who run New York City’s bootleg CD-r mixtape industry. Contemporary vinyl production continues, but it caters to specialist markets: DJs, audiophiles, collectors. Nowadays the most obscure group (or an unaffiliated fan) maintains a page on Rupert Murdoch’s MySpace site. If a band is unGoogleable, then it effectively doesn’t exist. If it is Googleable, then it’s only a click away, whether you’re on Azerbaijani dial-up or squinting at a Blackberry in east London. Redjeb’s narrative of discovery (‘Sean Uppal … was one of the first person [sic] to set foot in Benin in search of vinyl records. I arrived two weeks later’) gets shadowed by its doppelgänger: the journey into dissolution. Things fall apart. Of the men he seeks for interviews (and licensing discussions), several are dead, a few raise chickens, one has recovered from heroin addiction to find religion and a managerial position at the local brothel, and so on. The lasting power of these rare LPs belies the precariousness of the musicians’ lives. Yet music has always been fleeting, and musicians do nothing if not travel. The sounds on Contest were disposable pop that had the luxury of being captured on durable recorded media and the luck of being in a genre – Afrobeat – capable of sparking Western interest 40 years later.

Historical memory, in music, brings with it innate conservatism. Popular songs exist where recognizability crosses novelty. Music doesn’t get better or worse; it simply moves on. To stay fresh, genres require formal innovations that break – or simply disregard – what was previously perceived as their rules. Plus, all manner of surprises happen when the sounds bend to keep bodies giddy on the dance-floor. Don’t pay attention to the penultimate track, a ten-minute vamp by Vincent Ahehehinnou – you’ll find yourself nodding along anyhow. Critical apparatus centred on quality misses the sensual immanence of a form that propagates through constant reconfiguration.

Take hip-hop, for example. Many long-time fans heap scorn on viral phenomenon Soulja Boy, a black teenager who used audio software presets and a simple jingle-dance to secure the Number One single spot in America for seven weeks, landing a major label deal along the way. ‘A bunch of wannabe keep-it-real rappers that ain’t even relevant, recycling samples trying to act like it’s ’96 again and all they do is hate on new shit?’ blogged Kayne West in breathless defence of Soulja Boy. ‘Niggas always talk about the golden age, but for a 13-year-old kid this is the golden age!!’ Fela’s axiom – the notion that the golden age in music is always now – may trouble collectors. But those who locate their golden years in 1970s’ West Africa are in luck: 2008 is a great year for it. No doubt more reissues are on the way.