The Shape of Things to Come

An interview with Roger M. Buergel about his recent appointment as Artistic Director of Documenta 12 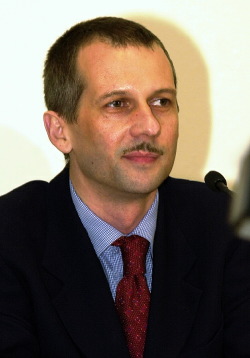 Born in 1962 in Berlin, Roger M. Buergel studied art, philosophy and economics in Vienna, where he has lived for the last two decades. One of the co-founders of the Austrian art magazine Springerin, he worked as private secretary to the Viennese Actionist Hermann Nitsch in the mid-1980s and has curated seven medium-sized group exhibitions over the last five years, all of them within Europe. In 2003 The Menil Collection, Houston, named Buergel as the first recipient of the Walter Hopps Award for Curatorial Achievement.
Although Buergel has not previously headed up a major institution or been responsible for an event on such a scale, his Documenta appointment is consistent with his proven interest in exploring a combination of politics, aesthetics and the methodology of display.
Buergel's latest project 'Die Regierung' (The Government) opened recently in Lüneburg, Germany. It will travel to the MACBA, Barcelona in June, followed by the Vienna Secession and Witte de With, Rotterdam.

Jörg Heiser: In December 2003, around the time you were appointed curator of Documenta 12, the exhibition 'The Government', curated by you and Ruth Noack, opened in Lüneburg. Has your approach to the way art is shown already been affected by your new appointment?

Roger M. Buergel: Of course, the fuss surrounding it has had an effect. I teach Visual Theory at Lüneburg University, and the idea is to involve the students in a collective praxis of, for example, exhibition making, without concealing the actual hierarchies of power. So it's also about exploring how far participation can go. That has changed now because we've entered a kind of star system.

JH: There's a certain irony here. The theme of the show is Michel Foucault's concept of governmentality - a neologism combining 'government' and 'mentality' - which describes the point where administrative power and individual 'self-government' intersect.

RB: That's the interesting thing about this idea of Foucault's: while one set of options is being presented to you, another is being denied. And that's precisely where we are now: I have to fight against my students' perception that I'm now the top dog who claims exclusive rights. But at the same time I'm being pushed into exactly that role by the press.

JH: Is it just the press? Isn't it also a part of the responsibility inherent in your new task?

RB: Sure, and it's right to recognize the paradigmatic character of Documenta. But at the same time it's a matter of making its organizational structures more porous.

JH: Your predecessor, Okwui Enwezor, involved a number of co-curators. But there is still a question as to what exactly is being delegated.

RB: There is a delicate balance between, on the one hand, genuine outsourcing and, on the other, pretending you have a team, which you hide behind to some extent, while keeping with an underlying structure that is in fact dictatorial and where nothing is really broken open. I don't know exactly how Enwezor managed this, though; I need to be careful.

JH: But don't you have a duty to put your own reputation on the line?

RB: That's how it should be, yes. The cover-up tactic of saying 'we do everything together', when ultimately it's down to one person, is no solution. The Documenta jury itself insisted on this: they explicitly stated their desire to have an 'author'. And I am happy with that, because I also have an autocratic streak.

JH: And you want that streak to be given free rein?

RB: Yes, definitely. But the idea of finding a more porous form of organization derives from a formal interest. I believe the exhibition will simply be better as a result.

JH: You've already dealt with the issue of governance. For the Expo 2000 World's Fair in Hanover you curated 'Governmentality. Art in conflict with the international hyperbourgeoisie and the national petty-bourgeoisie' for Austria, at a time when Jörg Haider's extreme right-wing party had just joined the governing coalition in Vienna. What did you learn from your experience of the mechanisms of power?

RB: That power is flexible. The representatives of the Austrian pavilion at Expo 2000 no longer felt comfortable with their slogan, 'Austria - The Art of Life'. At a time when the EU was imposing sanctions against the country, this was no longer a credible message. Instead, they wanted to reflect the resistance movement that existed inside Austria. What I said was no, not a national exhibition, not even with just 'good' people, and I suggested we take an international perspective instead, as similar political developments were taking place in Denmark and the Netherlands at the same time. They refused. Then we more or less blackmailed them: I claimed that the EU or France would definitely fund such an exhibition and that they needed to be careful they weren't accused of censorship. Suddenly the show got the green light. And in the end I was given carte blanche.

JH: An artistic rhetoric of political commitment that continues to insist on aesthetic autonomy has it easy - there is no need to check one's heroic gestures against reality.

RB: Sure, a problematic tension exists between politicization and aesthetic autonomy. But that can be an advantage. It's a matter of rendering this tension productive.

JH: But how does that translate into reality? For example, is it possible for a large-scale exhibition such as Documenta to communicate the necessary information when referring to concrete political conditions without it becoming didactic to the point of overkill?

RB: Good question. This is a fundamental problem Ruth Noack and I had to wrestle with for the show 'Things We Don't Understand' (at the Generali Foundation, Vienna, 2000). We drew a discursive line between the audience and the works, which is to say that we entered into dialogue with the works - through text. The form this took was something like the panels you see in museums with three paragraphs explaining what Impressionism is. But instead of spouting easily digestible answers, these texts also bounced the issue back at the public. That's how I envisage things in Kassel: the viewers shouldn't be buried under a mass of information that may not even be entirely relevant. Apparently, 80 percent of all the information you need in order to understand a work is independent of geo-political specificities, part of a general store of experience, because it relates to universal structures that have to do with government, or with modernity. The remaining 20 percent, which is very specific, needs to be communicated in more explicit terms - but people ought to seek this information out for themselves, if they are sufficiently motivated. What is the formal solution to this? I don't know the answer yet.

JH: Well, you have another three years to think about it. But more generally, can you see any ways that have not yet been tried to make the show more visitor-friendly?

RB: Yes, a great many. One can drastically reduce the number both of artists and of works, as well as moving away from the warehouse aesthetic, that art fair feel. Introducing some calm into the spaces and resisting the impulse to show absolutely everything - that would be a step in the right direction.

JH: Enwezor barely used public space. Are you planning to make it a factor again?

RB: For me the public sphere has always been a vital element. I think it's wrong for this kind of exhibition to be like a kind of white cube from Outer Space. If you go out into the city, it shouldn't take the form of one-man improvisations, as was the case with Thomas Hirschhorn's piece for the last Documenta. It needs to be more powerful. The main thing that interests me about Kassel is the fact that it is still a relatively coherent 'Fordian' city (i.e., one dominated by manufacturing), but one where a certain degree of fragmentation is already detectable. So the fabric of the city could be used to tell the story of the transformation from Fordism to post-Fordism (i.e. to an economy dominated by service industries). And this can suddenly lead urban space to become theatrical in an interesting way, one that is completely different from the Las Vegas brand of theatricality. It could go in that direction.

JH: But isn't Enwezor's decision not to include such urban space projects an expression of decades of disappointments with the impact of art in the public domain?

RB: Which raises a fundamental question about how you deal with disappointments in general - do you give up once and for all, or do you learn from them? - although the instigation of Documenta in 1955 itself, initially as an appendage to the Federal Garden Show, represented an intervention in the public domain. But back then the Fridericianum was still in ruins. Today it has become a classical venue again, far too solid for my taste.

JH: With the next Documenta in mind, do you look at exhibitions differently? Are you going to more shows?

RB: No more than before, and no less. I've always been very interested in the formal aspects of exhibitions. I have a huge archive of images of other people's shows. That's something I find extremely interesting: the exhibition as a medium, or as a display. I don't think I'll have any trouble finding interesting examples to glean ideas from.