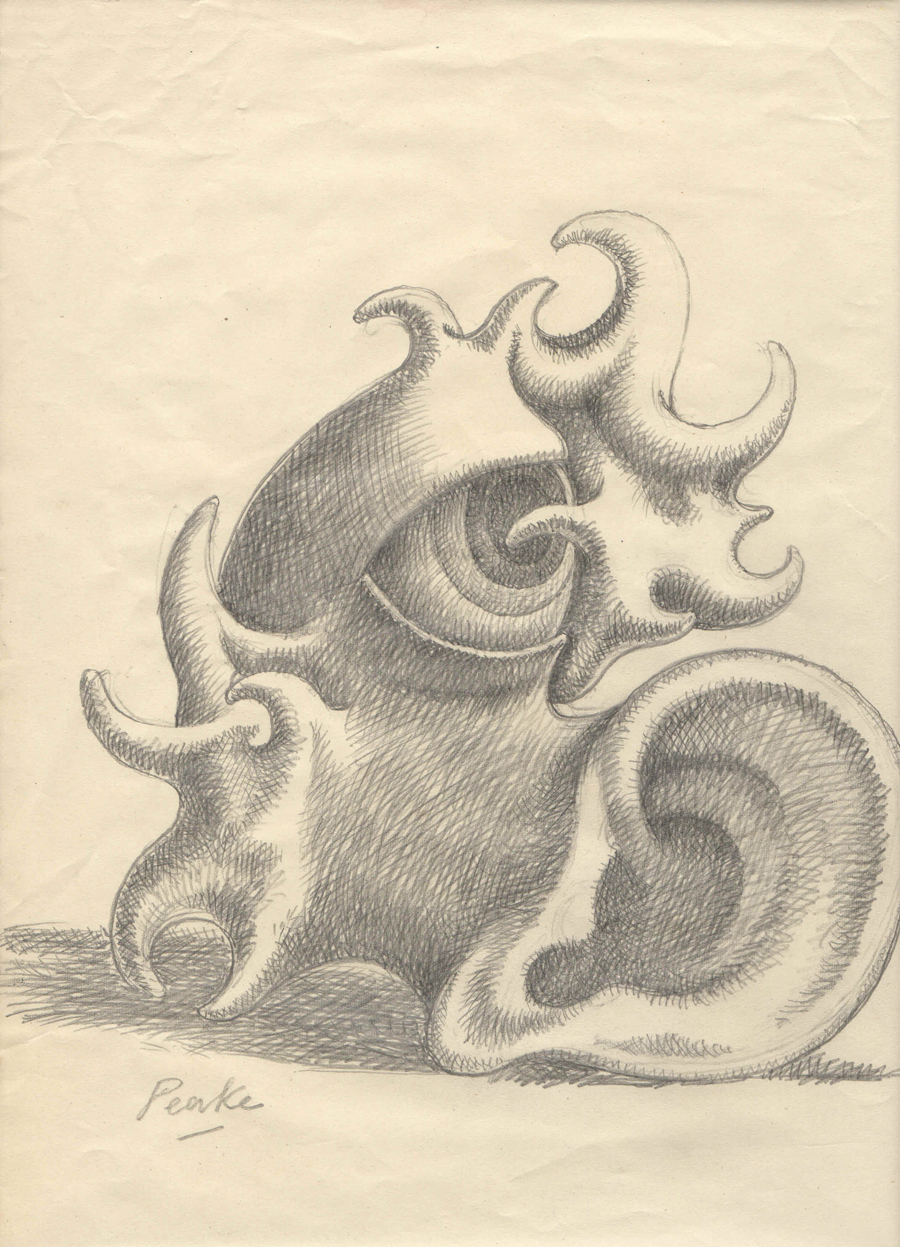 Mervyn Peake spawned this monstrous creature from exquisitely pencilled shadows. A novelist, poet, painter and illustrator, Peake lurked among the literary circles of inter-war London, conjuring metaphors of sinister sensuality. This coral-shaped piece of flesh appears on the cover of his poetry collection Shapes and Sounds (1941), penned just before his most famed work, a fantasy series known as The Gormenghast Trilogy (1946). The books completely floored me. Set within the battlements of a sprawling medieval castle and brimming with heartbreaking, Machiavellian courtly antics, they follow the lives of members of the dysfunctional Groan dynasty.

The prose is so hauntingly beautiful it’ll soak into your skull and liquefy the brains. In the opening pages, a tower arises like a dislocated finger ‘from among fists of knuckled masonry’ and points ‘blasphemously at heaven’. Glades of bottle-green ivy ‘run like dark water’ in the cool air. Clouds resembling severed, angel wings glide across crimson twilights bloodied by a smouldering sun.

I can see the antecedents of Gormenghast’s imagery in this silvery, graphite morsel. The book’s pages pulsate with images of gnarled stone morphing into maimed body parts: vast halls are described as gaping jaws, their doors missing teeth. Beyond the kingdom, amid a cruel wasteland and the bones of decaying trees, sunbeams transmogrify a pane of ash into a white forearm. Night falls and a hot, black eyelid closes.

The drawing reminds me of the giant, gnome-like ears from a Hieronymus Bosch hell-scape. But it also appears veiled with the mythological gossamer of Dorothea Tanning’s paintings: her dark crustacean bodies dappled in dreamy, diaphanous oils. It rhymes with Peake’s writing so harmoniously that attempts at literary categorization vanish in a puff of smoke. (Are they Gothic novels? Or something else entirely?) I could get in and sit among the velvet blackness, beneath distant turrets half-filled with rainwater, in which cherubs doze and mottled mares swim, forever.

‘Mervyn Peake: An Exhibition of Certain Rare Dreams’ is at The Viktor Wynd Museum of Curiosities, London, until September 2019.