Encountering Steve Roden's paintings in a gallery and reading about how they were made are two very different experiences. The dry descriptions of the systems Roden uses to dictate their formal properties are strangely at odds with the vibrant, seemingly random assortment of skewed patterns, the ungainly mix of colours and the playful biomorphism that characterize the work and make it so endearing. Take The Silent World (2002), for example. Here Roden uses a simple code of visual translation in which each letter of the phrase 'The Silent World' (the title of Jacques Cousteau's first book) is turned into a coloured line whose length is predetermined: a= 1 inch, b= 2 inches and so on. Yet unlike Sol LeWitt's wall works, whose assembly instructions leave little room for variation, Roden's systems are so porous as to open themselves up to literally infinite possibilities of the same painting. It's in these very fissures and gaps that Roden finds his most expansive moments. Slyly playing Conceptualist strategies designed to remove the ego from art against a Modernist yearning for subjective reflection and affirmation, none of Roden's works are ever exactly what they seem. Yet, paradoxically, they are infused with a beguiling specificity and purpose.

Like Arthur Rimbaud, who insisted that his abstract, fragmented and image-laden poetry meant exactly what it said, Roden's paintings, sculptures, drawings and sound-works are concrete in their fluidity, matter-of-fact in their obscurity. Resisting the need to sum up, to understand, his work revels in truths that are felt rather than known. Intuition replaces information as the modus operandi of his conceptual enterprise. Concerned with a phenomenological apprehension of the world, his work strives for a lucidity so extreme that it borders on delirium. In another's artist's hands these same motivations could easily result in a shrill, overbearing celebration of decadence or madness. What makes Roden's work so powerful is its very quietness. He speaks in a whisper so that you are forced to listen closely. This is most true of his ambient sound pieces - perhaps his strongest works - which press the limits of silence. The inside cover of a Roden CD will frequently have the instruction 'Play at Low Volume'.

Awed by the very gravity of the ideas he struggles to come to grips with, Roden humbly proffers his findings. This humility manifests itself most acutely in the craft-oriented, hands-on aesthetic of the work, the sculpture in particular. Generally small-scale and using off-the shelf materials from the local art shop - balsa wood, string, glue, clay, fishing-line, beeswax, etc. - his objects have a happy, disarming, elementary-school quality. Taking up the dangling threads of Process art, Roden always allows his chosen materials to act according to their nature. Recalling Joel Shapiro's seminal 1971 work One Hand Forming, Two Hands Forming, in Another Another Green World (2002) Roden closes his eyes and moulds forms out of clay while listening to Brian Eno's sombre 1975 album. In a similar vein, Letter Forms (2002), six-inch-long wooden dowels bristling with spiky appendages and wrapped with polyurethane-coated string, owes much to Richard Tuttle and Eva Hesse. Based on sound-wave images created by speaking each letter of the alphabet into a computer, letter forms strips language to its bones and, reversing Rimbaud's famous 'Alchemy of the Verb', attempts to transform the gold of poetry into base matter.

Like the sculptures, Roden's paintings marry the materialist imperative of Process art with Symbolist transubstantiation, resulting in a wholly unique brand of proto-modern biomorphic abstraction. As quaint as Paul Klee, and as tentative as early Piet Mondrian, Roden's paintings look like nothing else out there today. Filled with obtuse imagery that refuses all hints of representation, his small canvases nevertheless manage to fuse plant and animal forms, quasi-scientific diagrams, classroom doodles, topographical maps, architectural forms, Deco design, 1950s sci-fi illustration, psychedelic posters and Op art patterns into a seductive, sherbet-hued mélange that is perhaps best defined by Lucy Lippard's idea of 'eccentric abstraction'. Unabashedly sensuous, flirting with Surrealist tendencies and Outsider flights of glossolalia, they end up making sense while retaining the enigmatic appeal of the irrational.

Thus, making the most of the models offered by a far-flung variety of art movements and theories, Roden's is ultimately an art of hybrids. His work, on a deeper philosophical level, probes the manner in which the subject is constituted. The body, while never represented, is always present via the disembodied voice that echoes throughout the empty spaces occurring again and again in his work. In the end his project can be seen as attempting to develop a more acute understanding - an acceptance - of ourselves as fluid, permeable things. 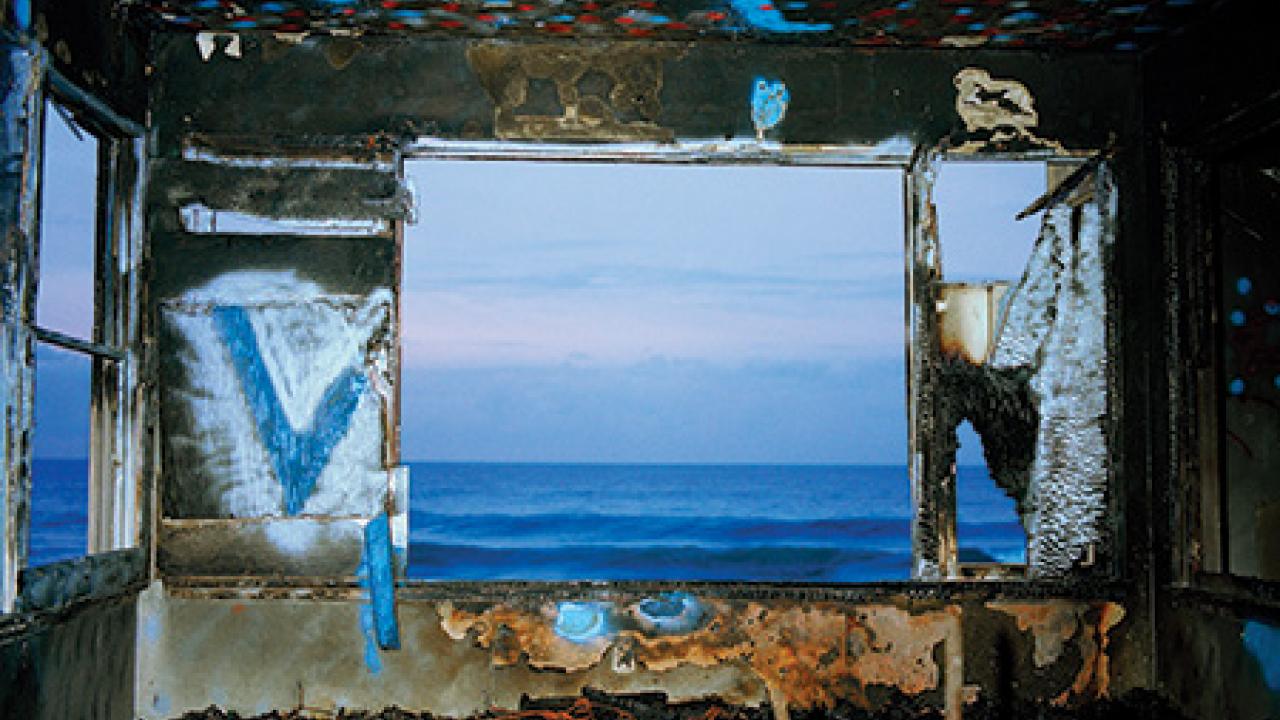