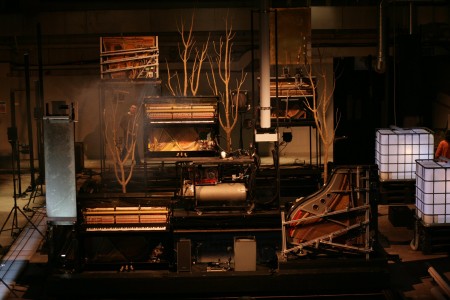 Apparently random sounds from earth float through the universe, eternally detached from their source or original time. I remembered this when I attended the performance of Heiner Goebbels’ thrilling new work, Stifter’s Dinge (Stifter’s Things, 2008), which suggests, in the most imaginative ways possible, that time may not be as linear as conventional thinking might imply, that meaning can be elusive (and no less meaningful for it) and that atmosphere and evocation can be as illuminating as explanation. (All of which recalls performances by Pina Bausch, who explores similar ideas through dance.) The title is a reference to Adalbert Stifter, a 19th-century Austrian writer, poet and occasional painter best known for his vivid descriptions of the natural world. Goebbels describes his homage thus: ‘The contemporary and radical aspects of Stifter’s work show through the deliberate slowing down of time and are of particular significance to today’s reader […] the performance/installation takes his oeuvre as a confrontation with the unknown: with the forces that man cannot master. It is a plea for readiness to adopt judgments other than our own.’ It took place in P3, the vast former construction hall for the University of Westminster’s school of engineering.

It’s hard to pin down what exactly this work – co-commissioned by Artangel and Théâtre Vidy-Lausanne – is. I, for one, have never seen five pianos play themselves in a largely un-peopled environment that, at various moments, evoked snow and the ocean, Romantic and Renaissance landscape painting, forests and cancer cells, all to the accompaniment of recordings of Johann Sebastian Bach’s Italian Concerto (1735), incantations for the south-westerly winds recorded in Papua New Guinea in 1905, an extract of interviews with Claude Lévi-Strauss, Malcolm X and William Burroughs, antiphonal singing by Colombian Indians and a traditional Greek song in chromatic scale sung by Ekaterini Mangoulia in 1930 to ‘welcome immigrants and offer good luck to the fishermen arriving from the Barbary Coast’.

Stifter’s Dinge opened with a low electronic rumbling that sounded like a huge heart beating quietly in a German nightclub. The pianos, like disembowelled bouncers, perched at the edge of three pools of water that two men – the only people visible – sprinkled with what looked like icing sugar from a giant sieve. What followed was like an elaborate hallucination that veered wildly between politics and poetry, centuries and moods: from the achingly melancholic (Bach played tentatively to raindrops) to a bleak misanthropy (Lévi-Strauss declaring: ‘I don’t believe there is any reason’ to have faith in humankind) to an almost upbeat Malcolm X declaring that times have changed and, finally, to dark intimations of ecological disaster. (References abounded to threatening and threatened forests and polluted water.) The out of tune pianos performed a range of pieces – from atonal mutterings to swßeet melodies – by themselves, like wildly gifted children who occasionally throw expressive tantrums. A recording of an excerpt from Stifter’s book Die Mappe meines Urgroßvaters (My Great Grandfather’s Portfolio, 1864) was read by Bill Paterson, a man with a mesmerizing delivery, mellifluous tone and Scottish accent. As he read, a projection of a 19th-century landscape painting with trees – Jacob van Ruisdael’s Marsh (c. 1600s) – seemed to dream itself into view; it was later superimposed with Paolo Uccello’s Hunt in the Forest (c. 1465–70), which drifted over the floor like an electronic carpet. Stifter’s words, which describe the experience of ice crashing from a tree in a snow forest, were alternately gorgeous and chilling: ‘We saw in front of us a delicate spruce fir bent into an arch over our path, like a triumphal arch of the kind offered to the returning emperors […] If something amongst the trees gained only an ounce of weight, it could fall, the tips of the pine cones fall like wedged slivers to the ground and bore holes right through us … ’. The night ended with the pianos, a little ominously, gliding towards the audience to the accompaniment of ferocious, gloom-laden sounds before retreating, once again, to where they first began.