Songs as memorials; the presence of the past in empty spaces 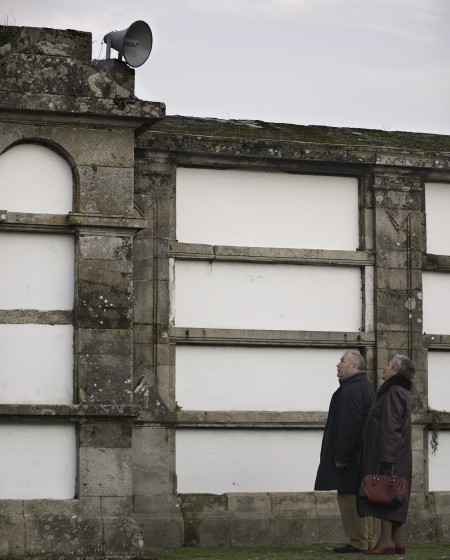 When, exactly, did folk music die? I don’t mean the genre that occupies the section on record shop shelves between country and blues: I mean the custom of passing songs down through generations and augmenting, recombining and misremembering them through repetition. In Britain, at least, some say its death coincided with the Industrial Revolution or the time when gramophones became affordable for most households. Or perhaps, as the artist Susan Philipsz might suggest, it never actually died: it simply became more complicated, the lineage of a song becoming entangled over time in a thicket of different ownerships, contexts and media.

Philipsz’ art works, which frequently consist of nothing more than an empty gallery and a recording of the artist herself singing, rely heavily on such intricate histories. Take the traditional Irish ballad ‘The Lass of Aughrim’, for instance, which the artist appropriated for her installation The Dead (2000). The song, which describes the seduction, rejection and death of a young girl, plays a pivotal role in James Joyce’s short story ‘The Dead’ (1914), reminding Gretta Conroy of the tragic death of her childhood sweetheart. It was later used in John Huston’s film of Joyce’s story, released in 1987, shortly after the director’s own death, and more recently in Pat Murphy’s biopic Nora (2000), where it is performed by Ewan McGregor, who plays Joyce. It would probably only complicate matters to mention that the title of the ballad also refers to the site of the bloodiest battle ever fought on Irish soil.

So the song, while functioning as a memorial to something lost, is nevertheless very much alive, a half-full vessel that is topped up each time it is reframed by new contexts and references. It provides a temporal paradox that is central to Philipsz’ work: that which is past, or absent, used as a device to return the viewer to the present. In The Dead the artist sings ‘The Lass of Aughrim’ a cappella, as she does most of the cover versions that feature in her sound installations. The listener, sitting in a darkened auditorium, becomes hyper-sensitized to the sound of the artist’s breath and the occasional snatch of noise from beyond the studio. Her voice is unpolished but not off-key; she does not seem to be performing the song so much as reciting it to herself. This sense of interiority, of a refusal of the normal relationship between the audience and the performer, is awakened further when the spectator notices flecks of white appearing on the auditorium’s screen. A 35mm projector is in fact playing pure black film, which as time passes and the film deteriorates, is populated by an increasing number of white marks. A reference to the blanket of snow that falls ‘all over Ireland’ at the end of Huston’s film, this device is also Philipsz’ analogy for the relationship between entropy and growth, the ongoing moment in which the obliteration of the past meets the emergence of the future.

For the exhibition ‘Stay with Me’ at Malmö Konsthall in 2005 Philipsz recorded herself singing three songs that are in different ways pleas for the past to persist into the future and, as the show’s title suggests, for the listener not to abandon the singer. ‘Watch with Me’ (1972) by Joe Wise, ‘Nothing Lasts Forever’ (1997) by Echo and the Bunnymen and ‘Pyramid Song’ (2001) by Radiohead are themselves all fragments from the recent history of popular culture, but in Philipsz’ voice they take root in the here and now. The emptiness of the white spaces in which they are heard produces in the viewer an increased awareness of their surroundings. When Philipsz uses objects such as organ pipes or the rims of glasses to make sounds, the architecture itself seems to breathe, and its emptiness becomes as full of potential as it is devoid of the past.

Often Philipsz installs her work in unexpected corners of the public realm: under a bridge during 2007’s Sculpture Projects Muenster; in the Shrine of the Nymphs near the base of Athens' Acropolis for the 2006 exhibition 'The Grand Promenade'; in a hillside shelter for the forthcoming Folkestone Triennial; or piped through the speakers of a Tesco supermarket to unsuspecting shoppers. With Follow Me (2006) she has haunted cemeteries in Berlin and Santiago de Compostela with an overlaid and repeating recording of the Yardbirds’ 1966 psychedelic hit ‘Happenings Ten Years Time Ago’. Despite each work’s specific and elaborate points of reference and the reliance on the communal pool of familiarity on which the songs draw, the experience of the listener is deeply solitary. It is nothing like the confident singalong of the crowd at a popular band’s concert and everything like the overheard noise of a radio from a next-door flat. This allows Philipsz to handle overtly political subject matter with a delicacy that would otherwise be nearly impossible to achieve. In The Internationale (1999), which she has sited in various locations, including an underpass in Ljubljana and an abandoned turbine hall for the Biennale of Sydney, she performs the left-wing anthem as something like a lullaby or an elegy, which emanates from overlooked spaces like a scent on the breeze. It is said that sound never truly disappears; its energy just dissipates into a continuous and inaudible hum in the world around it.