An interview with Philippe Parreno 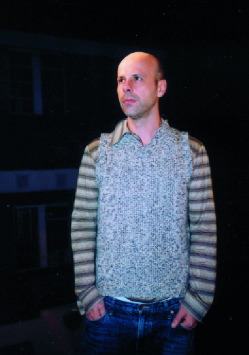 Tom Morton: In your recent series of glow-in-the-dark posters 'Fade to Black' (2003)‚ shown at the Kunstverein Munich, you reintroduce motifs from your previous work only to have them disappear as the gallery lights go up.

Philippe Parreno: There are many ways to show the same picture. At the Kunstverein in Munich, when the lights were on, you couldn't see anything as the image was printed with phosphorescent ink. The exhibition, then, was literally overexposed, and when the lights went off the pictures radiated before fading away - like a sort of inverted cinema. Whether in a magazine or in an exhibition, the pictures are framed by a time code, either by turning the page of the magazine or by the flickering lights in a gallery. Each of the posters refers to a series of events that took place in recent years, to a series of stochastic phenomena - sometimes in a loose way, sometimes more obviously.

TM: It's almost as though the posters are haunting the exhibition space?

PP: These pictures reappear like ghosts. It's not that they can't survive their re-presentation; it's more that they just don't want to die; they have not accomplished their task. Must they be treated, destroyed or incarnated? 'Ghostbusters!/If there's something weird and it don't look good /Who you gonna call? Ghostbusters!'
Do you remember that song?

Some of these events were part of exhibitions, like the 'ice man'; some were simply executed and documented. An exhibition space is not only a display of objects but also a space of negotiation, a place where a series of games can be played. I guess a football pitch is a good metaphor for it. In the summer of 1995 I made an ice sculpture that was installed in a public garden in Tokyo (Ice Man in Reality Park). Like an ice swan on a banquet table, the sculpture melted and was replaced every day. It's art turning seasonal; an ice man or a Christmas tree could be a work of art if they're shown in the summer. In 2002 I showed a videotape of the 1978 World Cup Final to school students, then I asked them to replay the game in the schoolyard, like they would have with a classic theatrical play.

I wanted to see this series of work again, so the posters function for me like Post-It notes. I'm not done with these objects. I read somewhere about a tribe that has no need of a calm area where they can relax and who reject ancestral sanctuary. They reject their kin as soon as they die and destroy all familiar objects that may stir up memories, crushing skulls and bones. They go as far as erasing their names from the list of names used by the living.

TM: You have spoken about how the organizational principle behind your work is analogous to musical scoring, rather than scripting. Could you expand on this?

PP: I guess I was referring to a way of programming the protocol of an exhibition. Is it a text or something else? Scoring, when you happen to deal with sequences of events, is more appropriate than text. It's more sympathetic as well. Snow Dancing (1995) started with the publication of a book in which I described a promotional event, a kind of party or festival. The reading time of the text was about the same as the event itself. So the book was a score that was performed in Le Consortium in Dijon. I transformed the exhibition space that hosted the party, and this time-based architecture became the exhibition - people were invited to visit an architecture produced by a party. So the book was a score that produced a space.

In Munich the captions of each poster are in a way a score: 'A radio programme broadcast during the summer of 2002. For one hour and 30 minutes a radio telescope panned over the sky, offering listeners a soundtrack to the stars.' When I met with Pierre Boulez recently, we talked about this nice idea of the score of the score, a way to define that ritournelle that gives the rule of the game, the element in a work that sets it in motion, its rules, or the rules of its rules.

TM: An image and an idea that recurs in your work is that of you as a child playing a game of football, while commenting on that game of football in your head - a closing of the gap, at least in a temporal sense, between reality and its representation.

PP: In one of the lines in Vicinato 1 (1995), a short movie that I made in Milan with Carsten Höller and Rirkrit Tiravanija, one of the characters stands up and, while pretending to play football, says something like, 'How many times do we see a child playing football while commenting on his actions on the field? It's hard to tell the difference between reality, its commentary and its representation.' In The Boy From Mars I was just working with the same interlaced blur. In this film the building exists because of its representation. The film produced its own reality. It's like the Iranian conjoined twins - you couldn't separate them.

TM: Your practice is characterized by collaboration. What benefits does this bring to you?

PP: If you take Vicinato 1, for example, we were invited by the Gallery Guenzani to make a group show and decided to project a film of our discussion, so the film became a projection of a group show. Most collaborative projects start from an ongoing series of discussions. You mention an idea, and somehow during the discussions people get involved, so we start working together. I don't want to make any theory out of it. I am just really surprised that there are not more collaborations, or polyphonies. When I work with artists, a way for me to learn is by using what they do. I think it's OK to let yourself be influenced by others in order to construct something. I mean, I don't want to play tennis against a wall.

TM: You've described Le Pont du Trieur [The Sorter's Bridge, 1999], the documentary you made with Charles de Meaux about the Pamir region of Tajikistan, as a 'science fiction film'. What do you mean by this?

PP: We started by recording a radio programme, and the film was shot and edited following that radio structure, with music breaks and so on. So when the film was screened somewhere, on leaving the theatre, getting back into your car or in a taxi, you turned on the radio and listened to the radio programme which was a continuation of the original programme. There was no end to the film; the radio programme was the extension of it. It was an exhibition strategy to integrate a distant country into your daily surroundings. That is a bit science fiction, isn't it? The fact that now you have to go to a theatre to see Bowling for Columbine (2002) is like turning a documentary into fiction. We should create permanent theatres called TV, like porno theatres, where TV programmes will be screened in big dark rooms, and people will say, 'this afternoon I am going to the TV'.

TM: For Le Pont du Trieur only Charles visited Pamir. How did this impact on the film?

PP: We did it first because of visa problems. The fact that we were not there together caused a gap between what he saw and what he showed me and what I thought he did. It's like looking through somebody else's eyes, which is one of the greatest fantasies. We should get a Bluetooth chip in our mouths, so you when you have communication problems you can allow others to get inside you. Anyway, this was the perfect opportunity for fiction to be played out. By not being there, I was that fiction. It was one of the most intense collaboration experiences I've ever had. And, in a way, it was a perfect way to write a movie.

TM: Much of your work seems to be concerned with the problem of picturing things.

PP: Credits (1999) was clearly about that: to provide a picture of something that does not have any representation. It was an attempt to fabricate a picture of these housing estate programmes, which are smaller and less problematic than what were called 'les grands ensembles', an urban planning programme called 'ZUP: Zone à Industrialiser en Priorité'. These urban programmes were planned by necessity, so you could destroy or hide them with green design. Nobody claimed them. No logos. They were part of our landscape but you didn't see them. I grew up in a context that did not have pictures. Le Pont du Trieur involved a similar process. It was before CNN started to go [to Pamir], at a moment when people were just waiting, and how do you make a documentary about people waiting? The TV wasn't even interested. What we proposed through that radio programme idea was to share this waiting time, to be in your seat listening to a radio programme while watching a movie.

TM: It seems to me that, although your work is conceptually driven, it also embraces aesthetic pleasure.

PP: At some point I may have to go in for a Marxist self-criticism session, but not now. I am happy if you take pleasure in looking at some of my stuff. I try to produce great pictures out of a series of out-of-focus ideas. I should be more spectacular sometimes. When I say 'spectacular', I don't mean MTV spectacular, with a
huge audience and whatever, but being capable of releasing a clear-cut and compromised idea that can be discussed for a while. The fascination I have for the productions of certain modern masters is based on that notion of a great corrupted spectacle. We are sometimes stuck in an after-effect. Like the industries that start by dealing with their effects rather than with what they produce.

TM: You have said that 'a good image is always a social moment'. What do you mean by this?

PP: A good image is always a social moment, which means it's not so much about what it is, it's about what it means. So it doesn't stand by itself; it stands because of this faith that you have in it. So, in a way, the picture makes sense because people agree that the picture makes sense. One of the questions raised by the Vicinato films was how we could share the same picture. The same question was recurrent in the No Ghost Just A Shell (2002) project. For example, a demonstration is a great illustration of this idea because it's clearly an agreement between many people who want to be part of the same picture. It's not
what you put in the picture; it's being part of the same one and agreeing to be part of it.